Captain of the 1897-98 crew, McConville took over for O’Dea when the latter tried Harvard’s two-tiered coaching system for a year. The crew’s 1899 “Berry Crate” race at the Poughkeepsie Regatta became the stuff of legend. Leading Penn for 3½ miles of the 4-mile varsity race course down the Hudson River , UW coxswain J. G. Dillon was forced to swing into the boating anchorages of spectators in order to avoid damaging his shell on a floating strawberry crate in his course. The sharp turns and the boat-cluttered race path caused Wisconsin to slip behind Penn by 1.6 seconds to finish second at 19:46.6.

McConville readily gave up his coaching position to pursue a professional career when O’Dea sought to return to Madison . In 1928, McConville joined recent UW captain Franklin Orth, Walter Alexander (captain in 1896) and Harry Thoma to form the Wisconsin Crew Corporation, a money-raising predecessor to the Wisconsin Rowing Association. 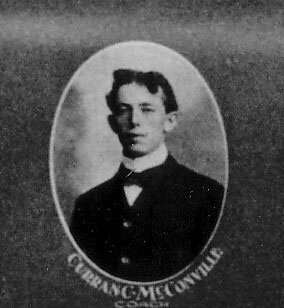 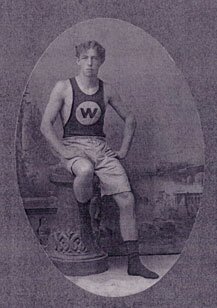