Murphy, captain and stroke of his Washington freshman boat and twice captain and stroke of the Washington varsity, was hired in December 1928 by Badger AD George Little and came to Wisconsin from the position of Yale's freshman crew coach. From Vail's death in August of that year, 1927-28 season captain Franklin Orth, who also founded the Wisconsin Crew Corporation this same fall, had been the acting crew coach.

Murphy had a colorful background, including coming up with the new Washington mascot name (together with his 5-seat Bob Ingram) of “Huskies” in a Washington “W” Club meeting in 1922. It seems the Seattle Chamber of Commerce didn't particularly like the mascot name of the “Sun Dodgers.”

In 1930, a local newspaper boy and later Wisconsin State Journal publisher, J. Martin “Murph” Wolman, would help Coach Murphy drive the coach's launch after selling out of newspapers in front of the student union. The young Wolman became such a shadow for Coach Murphy, the crew quickly nick-named the young man “Murph Junior” or just plain “Murph.” The name sticks to this day.

By 1932, the recession and some uneven budget busting by controversial UW President Glenn Frank, forced the Athletic Department to ask Murphy to take an annual salary reduction from $5,000 to $1,500. He agreed, so long as either his savings hadn't run out or the department's budget didn't return to surplus, when his salary might be re-instated. For his financial sacrifice, Murphy, too, is credited for keeping alive the flame of men's crew at Wisconsin . When, at about the same time, a budget surplus was not shared and Murphy's savings ran out, Murphy resigned to make a better living. Some years later, he sold one of his key garbage truck packer patents to Milwaukee 's Heil Co. before retiring to Arizona. 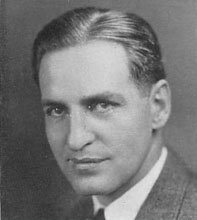 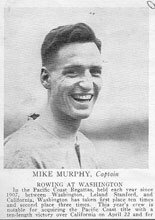