In February 1892, by the union of “the Base-ball Association, the Foot-ball Association, the Tennis Association and the Boat Club,” the University of Wisconsin Athletic Association was formed. Its stated objective was to advance the athletic interests of UW in all lines. All students of the university could become members of the association upon payment of one dollar. The officers of the Boat Club in February of 1892 were E. P. Worden, President; C. C. Case, Vice-President; W. T. Saucerman, Secretary and Treasurer; C. E. Hilbert, Commodore and E. W. Howland, Vice-Commodore.

April 4, 1892, The Daily Cardinal began publication. Its headline: “Pyre Carries Off Oratorical Honors.” J.F.A. Pyre would later row in Wisconsin’s first victory against a non-intramural opponent in August of 1892.

In the spring of 1892, the (two) eight-oared gigs arrived, and from that time, interest in aquatic sports has never lagged. At least 48 men rowed in the class races of the regatta that year. Pyre later wrote “Wisconsin,” a history of the university, and in it mentioned these two boats as having been purchased with money “secured by subscription.” By this he probably means word was passed and signs posted at the waterfront asking students to contribute a certain amount of money each so as to secure a right to use the new boats.

June 3, on a ¾ mile “out and back” course, three (sic, four) class races were held, a single scull race (won by James Henderson (13:19) over E. L. Case), a half-mile pleasure boat race and a double scull race (won by James Henderson and E. L. Case over Joseph Evans and C. C. Case). Actually, a fourth race of eights was also run, with the sophomore-senior entry winning in 11:10 over the sophomore-junior boat (11:25) and the senior-freshman shell (11:52).

A Wisconsin ‘varsity’ team, selected from the best of the class crews, participated in and won its first non-intramural competition against the Chicago ‘Navy’ (a ‘selected’ team of the best men from eleven Chicago boat clubs) on August 27, 1892 on a ¾ mile ‘out and back’ course on Lac La Belle in Oconomowoc, Wisconsin. 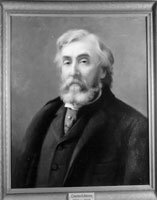 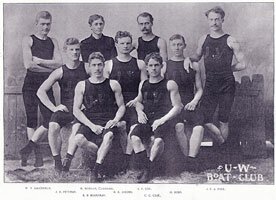