In September of 1892, UW named Dr. Charles Kendall Adams as its new President. Having come from Cornell University, where crew coach Charles E. Courtney had literally put Cornell on the world map with his successful college crew teams, Adams knew what crew might accomplish in the way of notoriety for the University. His biographer, Charles Foster Smith, in his book Charles Kendall Smith, A Life-Sketch, writes, “During his administration Camp Randall was acquired, and the football team and the crews ‘put Wisconsin on the map;’ and his constant interest and support had their full share in this result.”

The boat-house stood just back of the new gymnasium on the lake shore. It provided ample room for the race boats, and for as large a livery of pleasure boats as any college boat-house in the country. Construction of this building was started by the old boat club, but the undertaking proved too large for that organization, and during the winter term of 1893 the present University Boat-House Company bought and completed it. Shares were issued at $5 apiece. UW President Adams had a continuing hand in the completion of this project. The aquatic department of the Athletic Department owned the shell, organized the crews and conducted annual races.

In the spring of 1893, an abandoned paper shell was purchased from Harvard and a crew composed largely of football athletes was put in practice.

Captain Fred Pabst (a former steamboat captain on the Great Lakes) through his generous donation, helped secure the first new (?) eight-oared paper shell. Walter Alexander (Captain in 1895-6) remembered the Pabst boat as being a “pressed-paper” shell. (Pabst had married the daughter of Phillip Best, who had opened a brewery on Chestnut Hill in Milwaukee in 1844 when Wisconsin was still a territory. Pabst at one point acquired half the brewery from his father in law and later 100%, changing the name to Pabst Breweries.)

The boat was selected by the naval authorities when there was no means of sending an expert on boats east to examine it. Consequently, the boat pawned off by the boatbuilder was not of the best make. It was rigged in an old-fashioned style which added at least fifty unnecessary pounds to it. The boat builder put it in sections which still further took away from its speed. It was badly handled by the express company in delivery so that in a year’s use it became somewhat heavier. Mr. J. A. Pyre, while east during the summer, visited the boat builder, Waters & Sons, at Troy, New York, and the head of the firm himself acknowledged that he had given the university navy an inferior boat although two years ago he had guaranteed perfect satisfaction.

It is believed the Delaware Boat Club - part of the Chicago ‘Navy’ which raced the UW varsity in the Badger’s first ever non-intramural contest over the summer of 1892 - was one of the several Chicago boat clubs which banded together in 1910 to form the Lincoln Park Boat Club of Chicago. 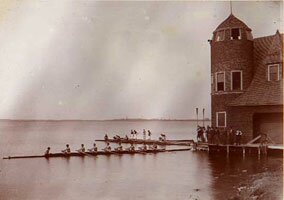 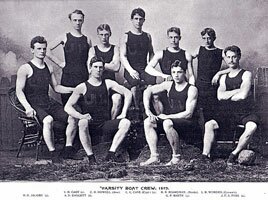 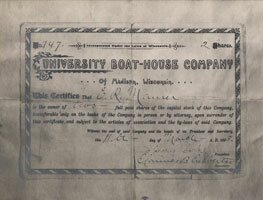