In 1895 and 1896, during which years the Big Ten was formed, UW President Adams was emotionally involved and eager to get the Conference established. Adams was very active attending Wisconsin athletic contests and cheering on the teams.

In October, Wisconsin’s Athletic Department challenged Columbia to a race, but because of several subsequent difficulties, “the matter has been practically dropped for the time.”

On April 6, 1896, tragedy struck the Badger rowing program. John F. Day (1876-1896), a sophomore letterwinner who had rowed on the varsity (3 seat) last year as a freshman, was the victim of sudden bad weather and the cold early spring waters of Lake Mendota. The front page of the Daily Cardinal of April 8, 1896 recounts the sad events of April 6:

Monday afternoon occurred the drowning of John Day , ’98, on account of the swamping of a pair-oared shell in which he was rowing. The two new shells had been launched for the first time on Saturday and the oarsmen were anxious to try them again as soon as possible. Monday afternoon John F. Day was stroking the coxed pair, with C. C. McConville in the bow and Patrick O’Dea as coxswain.

The 1896 team was strong. The freshmen beat the crack Delawares from Chicago.

And someone…I don’t remember now who that public spirited citizen was…had given us a new shell. The Badger crew had never gone east before that year; it never was able to raise the price of train tickets or shipping costs. But we went out and raised $600 for the trip. The Madison and Milwaukee businessmen, the professors on the hill, everyone contributed something for that trip. We had to win.

And win they did.

Wisconsin’s first race against a college crew was versus the Yale Frosh (the Yale varsity, having declined to participate in the Poughkeepsie Regatta, was trying their luck at the Royal Henley Regatta) on Lake Saltonstall, New Haven around 5:00 PM on June 18, 1896. In anticipation of the this race, Casper Whitney, rowing writer for Harper’s Weekly wrote, on June 20, 1896 (p. 622; the piece was written prior to the race but published with a date two days after the race. In this day, news weekly articles and photos were often published several weeks after the event itself.)

The Wisconsin ‘Varsity will row Yale Freshman on Lake Saltonstall, New Haven (from the east end of the lake to Regatta Point), next Thursday, and has an opportunity of a college lifetime, for the Yale crew is one of the poorest that university has had in many a day. As Wisconsin has no college superior on Western waters, we shall be able to make a very accurate estimate of Western rowing.

The Wisconsin varsity eight won so easily their two mile race with the Yale Freshman June 18, on Lake Saltonstall that we feel that we really only half knew the capabilities of the Western crew. But we do know that the blade work and the body-work of this Wisconsin eight were not very much inferior to the best we saw at Poughkeepsie last week.

They sat up to their work with good backs, caught the water hard and together, left it neatly, and withal had an excellent body swing with a leg drive.

All in all, the crew was somewhat of a revelation to Eastern men of the attainments of Western crews. But in truth this crew may not be taken as criterion of general Western rowing, for it is considerably in advance of its college neighbors. The conditions were unfavorable for fast rowing in the 18 th, with a strong head wind and roughish water, and trying, too, to a crew averaging only 152 pounds, as did Wisconsin, against Yale’s 164. Moreover, the Westerners lost the toss and the choice of course, and were not in their best condition. So they certainly enjoyed no advantages.

Wisconsin caught the water first, at a racing stroke of 40, which was lowered by 4 points at the quarter mile. Where they had a lead of a half boat-length. Steadily gaining, they were at the mile rowing easily (at 35) and cleanly, while Yale was pulling 38-39, in poor form, and splashing and falling behind. The space between the two boats increased as they neared the two-mile mark, and when Wisconsin finished in 12.06 2/5, Yale was about ten lengths behind and crossed 34 seconds later.

It is true the Yale Freshman crew was one of the poorest, if not the worst, which has come out of New Haven in recent years, but that does not alter the fact that Wisconsin showed decided rowing skill and good stroke.

This Western ‘varsity seems too light to stand the work of a four-mile race, but if Wisconsin can turn out a Freshman crew in such good form we should like to see it entered at Poughkeepsie next year.

Following the race against the Yale frosh, the Badgers took the buffet sleeper train over the New-York Central Railroad to Poughkeepsie, NY on June 20 and left the same day at 8:05 PM for Wisconsin. The UW rowers came at the invitation of J. W. McCullough, Commodore of the Cornell navy and viewed the preliminary work of the crews from the Cornell launch. The New York Times wrote,

The rumor that the Westerners would enter the intercollegiate contest was absurd, because they were barred out of it months ago. Manager Rohn said that under no circumstances could his crew enter the race, because they had made overatures months ago, but the colleges were unwilling to admit them. Before leaving, the visitors walked over the big railroad bridge over the Hudson.

There was not as much betting this year as there was last year, although the Varsity race is less than a week away. A few small bets have been registered with oddds on Harvard. Henry Sampson, a Harvard sub, was around the Nelson House today offering $200 at odds of 2 for 5 that the Harvard freshmen would win aginst the field. The Cornell men offered to cover his money before night. (Cornell eventually won the frosh event).

July 4, 1896, on Lake Minnetonka in Minneapolis, Minnesota, the UW varsity ( 10:42), in their annual match-up, beat the Minnesota Boat Club by ¼ length. The Wisconsin State Journal of July 6 went on to report, based on interviews with Oscar Rohn and Charles Case, “They say the race was a pretty one and Wisconsin won it fairly, the talk of a wash of the steamer bothering the Minnesota being all bosh. ‘Personally, we were treated nicely, but the newspapers did roast us awfully. The St. Paul papers called us muckers and called Andy O’Dea an ass. When all who know him know he is quite the contrary.’ ”

The massive Schlitz Cup, of silver and gold, reverts to the possession of the Wisconsin crew, having been twice won by by the Minnesotas. Three times winning would have kept the trophy in St. Paul. It was witnessed by an immense crowd…and the Lafayette shore was thick with onlookers.”

At the 1896 IRA’s, the first freshman race on a two mile course was held on June 24, with the finish in this order: Cornell, Harvard, Penn and Columbia.

The varsity eight finish was Cornell, Harvard, Pennsylvania and Columbia. Wisconsin did not attend.

Coach O’Dea’s launch was named the John Day after the varsity oarsman who drown. 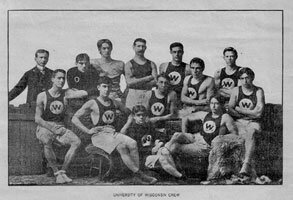