It must be a great pleasure, not unmixed with surprise, to the supporters of Wisconsin crews to learn, that, instead of the usual lack of interest (after a last place in Poughkeepsie in 1904), there has been a decided and healthy increase, both on the part of candidates and supporters, which seems to show that rowing is a popular form of athletics in firm favor at Wisconsin.

The season of 1904 was an especially trying one for all concerned, and commodore, captain, candidates, and coach had their usual worries about doubled; and it is pleasant to record that utmost harmony prevailed. There was so much subscription paper in circulation (Author's note: perhaps students soliciting financial support for other projects, teams and causes) that soliciting funds for the crew was very unsatisfactory. In spite of this disadvantage the commodore inaugurated and carried on to a successful issue a canvass for funds which stamps him as one of the most efficient, if not “the” most efficient commodore in the history of Wisconsin rowing. The freshman crew, in the St. John's Military Academy race, established a new Wisconsin record for one mile and a quarter - 6 minutes, 35 seconds, and in the Duluth race this crew rowed the Varsity to one length. The promotion of one man to Varsity crew, the defection of another, and the rule rendering ineligible long course agrics (i.e., agricultural students) were the means of disbanding this very good freshman crew.

The new four-oared shell was smashed in transit from Ithaca where it was built; and it was patched up only two weeks before the Hudson River race, which prevented the crew becoming accustomed to the boat and hindered them from “getting together.

The “John Day” (a mal-functioning coach's launch, named after a UW crew member who drown in 1896) was again unfortunate and seriously handicapped the coaching of the crews; but notwithstanding all these drawbacks two fast crews were developed, and Mr. O'Dea is authority for the statement, “That the Varsity crew was the fastest four-mile crew which has been developed at Wisconsin.” The Duluth race proved this statement. The crew rowed a slow stroke throughout the race and finished in good form without any signs of distress in 10 minutes, 35 seconds, which, for lake water, is a very good performance.

The Varsity shell “Forward” proved altogether too light for the heavy crew she was called upon to carry, and in the rough water, which was unfortunately the case during the first mile at Poughkeepsie , she was absolutely useless. The poor showing of the Varsity crew at Poughkeepsie was due to the waterlogging of the shell, there being between four and five inches of water in the boat at the finish of the race. Most, in fact all, of this was taken in during the first mile, which made the race one long, hard handicap. Notwithstanding this the crew finished the course in good form, and demonstrated once more that “there are no quitters at Wisconsin .”

Harper's Weekly of July 16, 1904 (Vol. XLVIII, No. 2482, p. 1089.) described the IRA races under two photos of four freshman boats at the start and the finish of the varsity race where at least four shells are visible. The caption continues, “The feature of the annual IRA, held over the Poughkeepsie-Highland course on the Hudson River, June 30, 1904 was the victory of Syracuse (20:22.6) over Cornell, the favorite, in both the four-mile ‘varsity race and the two-mile Freshman race. In both events the Syracuse crews won over Cornell by four lengths.”

..an enormous tow of barges and canal boats, working its way slowly down the east shore occasioned some dismay, lest the swell occasioned by the tug would give the light shells rough water for at least one-half a mile. Wisconsin was not in sight. The referee's boat grew impatient and half a dozen shrill toots of the whistle blew sharply as a signal to the delinquents to hasten. At last the much-heralded Westerners appeared paddling methodically, with a long slow stroke. At least ten minutes were lost by Wisconsin 's dilatory tactics.

A crowd of 80,000 spectators watched the varsity race.

The Syracuse varsity eight victory under the to-be-famous coach Jim Ten Eyck , Sr. was his first of many IRA wins. 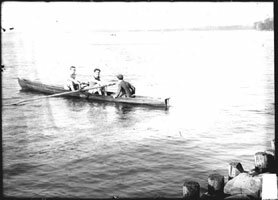