Coach O'Dea spoke of the joy he had in getting the opportunity to coach the frosh in the fall. The last frosh practice in the fall of 1905 was November 28th .

March 1, “in an obvious effort to encourage further gifts for their program, the rowing team (still under student auspices, rather than the university) announced that a rich lumberman and U.S. Congressman, Isaac Stephenson of Marinette, had given $500 for a new motor launch so that coach O'Dea could travel alongside the crews as they practiced.”

Despite Mr. Stephenson's gift, on March 15, 1906 , coach O'Dea announced his resignation “explaining that he had been frustrated by the rowing program's failure to secure necessary equipment and facilities.” The UW administration described it as, “Following an athletic department re-organization in 1906, Coach O'Dea resigned and was succeeded by Edward Ten Eyck.”

Through April, 1906, student Crew Commodore Cudworth Beye (UW '06), who six months earlier had engaged Frank Lloyd Wright to design a supplementary boathouse (see “Boathouses” in the chapter “Rowing at Wisconsin”) on the Yahara River, personally raised and encouraged campus group benefits to collect $1,800 in subscriptions to send the crew to the Poughkeepsie Regatta. For the same event, the Columbia University crew had raised $11,000.

On June 1, 1906 , according to a concert program titled "Crew Benefit Concert," featured the "Glee and Mandolin Clubs of the University of Wisconsin ." proceeds of the concert helped pay for the trip to Poughkeepsie Regatta.

Without a coaching launch at Poughkeepsie, Cornell coach Charles Courtney, noting his crew and Wisconsin's would both be practicing on the same side of the Hudson River the morning of June 18, invited UW coach Andrew O'Dea to join him in the Cornell launch. O'Dea coached out of one side of the boat and Courtney out of the other.

The varsity four finish at the IRA's was Cornell, Syracuse , Columbia and Penn.

In the New York Times front page of June 24, 1906 , the freshman race was described, “Five freshman eights and a splendid lot of youngsters they were, too, appeared at the starting point for their two-mile race. Young Jim Ten Eyck, Jr. (the stroke for Syracuse freshman) was conspicuous in the stern of the Syracuse boat by the black cap he wore, being the only man to wear a head covering. His indomitable grit and the masterful stroke that he set and maintained throughout the exciting contest contributed materially to the victory of the crew.

The Syracusans took the lead from the start. At the half-mile they were half a length ahead of Columbia and Cornell, who were making a game fight for second place. In the next half mile Columbia was distanced while Wisconsin developed unexpected strength and threatened to make things interesting for the new York boys. Before the mile mark was reached the Westerners had not only passed Columbia , but were lapping the Ithacans, and for half a mile the race was full of excitement.

Going under the bridge Columbia was hopelessly behind, while Cornell, Wisconsin and Syracuse , at the mile and a half mark, were so close together that it was impossible to see open water between the boats. Ten Eyck then called on his men for a finishing spurt and the youngsters responded handsomely.

The additional power carried the boat well ahead of Cornell, nearly half a length of open water being discernible. Wisconsin would not be shaken off and Cornell's lead of half a length was reduced inch by inch in the last half mile so that the judges had to use the finest discrimination in deciding the places of the boats as they crossed the finish line.

Cornell had just enough speed to get the second place by five or six feet. Syracuse being a good length in the lead. Columbia was fourth, and Pennsylvania , who had hardly been thought of soon after the start, was far in the rear. Only three-fifths of a second was the difference in time between Cornell and Wisconsin .”

The varsity crew may be well and aptly named the ‘Unfortunates,' for never did a crew try harder, nor train more conscientiuosly and maintain a cheerful disposition in the face of misfortune than this ill-fated crew of 1906. This crew is a fair sample of the rowing problem that a coach has occassionally to wrestle with. The material was fair and some excellent, but unfortunately in equine parlance the ‘did not hitch.'

The personnel being constantly changed, and when the order was at last determined, the crew was rowing well and their progress encouiraging; but their ill luck remained with them to the end. “The last straw' arrived when Hine, the regular No. 7, ruptured a ligament and had to be taken from the boat four days before the regatta.

You have taken defeat manfully and victory modestly, and that is the reason why Wisconsin oarsmen are popular even among their rivals. Such a reputation is ample compensation after the work of a decade. 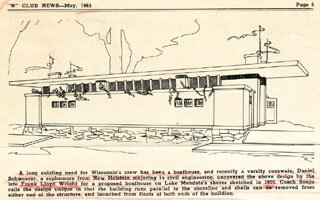 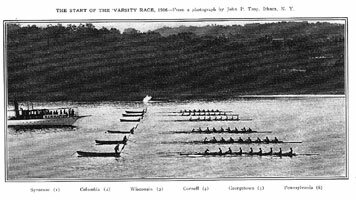 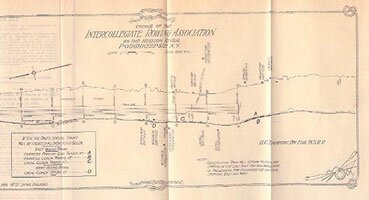 The Red Gym and Wisco boathouse 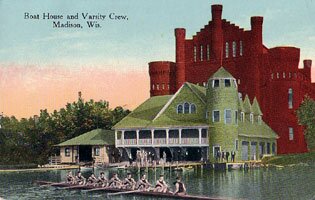