“The boat house and the poverty of the crew are disgraces to the institution,” wrote Charles McCarthy in a 1908 letter drafted at the request of, and sent to, Charles P. Van Hise, then the university's president. McCarthy was a part-time instructor at UW and a volunteer coach.

Coach Ten Eyck was on hand early in the fall, and crews to represent the various classes in the university were organized, to open the season. With the arrival of spring and the disappearance of the ice on Lake Mendota , two rowing clubs were organized on a basis similar to those at Cornell, Yale and all colleges where rowing is practiced successfully. These clubs brought out a large number of men.

The 1948 Centennial Sports Review described the season in this way,

UW Coach Ned Ten Eyck believed in lots of work. As a result, he sent a well-conditioned, powerful crew to the Hudson in 1908 and the time trials proved it. In the varsity race, after Penn had sprinted into the lead, the Badgers gradually drew up, passed Penn at the mile, led by a length at two miles and also at three miles. In the last mile, a Badger oarsman collapsed, the shell dropped back, and Wisconsin registered another losing crew, finishing fifth.

West Coast crews (Washington and Stanford, for sure, and possibly Cal ) received an invitation to race at Poughkeepsie , but a shortage of money made the journey impossible.

The IRA's in 1908 marked the beginning of the betting of the shirts. Jim Ten Eyck's “brash and loud, cocky and aggressive” coxswain was Frank Eldridge for Syracuse . This same coxswain was severely excoriated by the newspapers for tearing out the bow of his shell by hitting a rowboat while chatting with his stroke, Jim Ten Eyck, Jr. In fact, as the No. 7, W. Claude Fisher explained a half-century later, the bow was damaged by hitting a half-sunken berry-crate. With the help of a Cornell friend, John Boyle, a boat builder, Syracuse slowly watched their boat being rebuilt. Working through the night and into the next, taking off only a few hours to sleep, eat and bath, Boyle finished the boat at 10:00PM two nights after the accident. Coach Ten Eyck had the shell tested in the darkness of night on a two-mile run; it passed the acid test.

The next morning, the cocky Eldridge sauntered up to the Columbia coxswain, W. S. Winslow and persuaded his team to bet their jerseys on the outcome. After Syracuse won the finals, the Columbia cox jumped into the water, swam over and presented his team's jerseys. The gesture was followed in the forthcoming years whenever college crews gathered after a race.

At the crack of the gun, Pennsylvania jumped into the lead, followed by Columbia and Wisconsin .. When the first mile post was passed, Pennsylvania dropped back and Wisconsin came to the lead. The advantage was increased to a length at the two mile point and was held easily all the way down the third mile, which is considered the deciding mile for final positions. Just before commencing the fourth and last mile of the struggle with everyone apparently in good form, a sight hitch came in the rhythm of the boat and then a perceptible pause. It was then seen that one of the oarsmen had collapsed and that only seven men were left to carry the boat over the line in another losing race for Wisconsin.

Ned's Badgers rowed at an unheard of 42 strokes per minute and raced up swiftly at the (start) and passed the Lions (Columbia). Ned's crew was to burn itself out with the highest strokes ever witnessed in any Poughkeepsie race. It was insanity, and eventually Wisconsin paid the price. The Badger's No. 6 oar, R. Iskisch, struck himself in the stomach with an oar handle, writhed in pain for a moment, and then collapsed.

I would much rather have seen my crew last with all men rowing than to have one unable to finish, for it will be taken by many that the collapse of one man was merely a good excuse for finishing so badly.

Syracuse finished a length and a half behind winning Cornell, but three-quarters ahead of the Lions. Wisconsin was two lengths behind Columbia. Pennsylvania trailed them all. 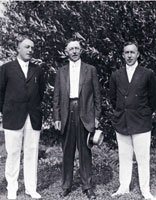