In the fall of 1909, UW student and songwriter Carl Beck introduced “On, Wisconsin ,” which he composed, at a pre-game rally before the Wisconsin-Minnesota (football) game. The music, written by William Thomas Purdy, “may well have been influenced by a passage from the first act of Tchaikovsky's famous 1877 ballet, “ Swan Lake .” William E. Studwell, a professor at Northern Illinois University and author of College Fight Songs II (Haworth Press, New York) later ranks “On, Wisconsin” the third most popular college fight song after “Notre Dame Victory March” and Michigan's “The Victors.”

Famous Coach Hiram B. Conibear and his Washington “Sun Chasers” (the “Huskies” after 1922) made its first trip eastward for a two-mile race against Wisconsin on June 4, 1910 and, in a drenching rainstorm, lost to the Badgers (16:06) by three lengths.

On June 27, the Wisconsin State Journal reported, “The motor launch used by Coach Ned Ten Eyck of the Wisconsin navy was destroyed by fire when a fire burned the steamer Poughkeepsie of the Central Hudson Steamboat Company and the company's storehouse at Highland opposite the city of Poughkeepsie .”

This boat loss and the two last place finishes by Wisconsin in the varsity and freshman eights at the Poughkeepsie Regatta may have been too much for Coach Ten Eyck, for he resigned by the end of the month of June.

On June 8, 1910, the Lincoln Park Boat Club of Chicago was founded by the merger of four boat clubs ( Delaware , ????) in the city. It is now the oldest boating facility in Chicago and is located in Lincoln Park. 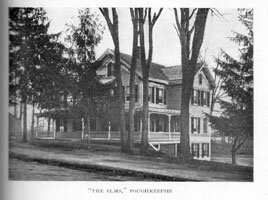 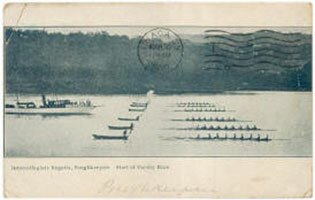