October 13, 1910, Edwin Regur Sweetland, a rower at Cornell for at least two, possibly three years (a substitute on the 1898 varsity and the No. 5 seat in the 1899 varsity eight. Wisconsin, second behind Penn, finished ahead of Cornell in 1899), and disciple of “old man Courtney” was named to become the new head crew coach at Wisconsin, succeeding Ned Ten Eyck who resigned in June. E. R. Sweetland was at the time the physical director at the University of Kentucky . Prior to this, in 1899, Sweetland had been Syracuse University 's part-time football coach. The same year, he agreed to become Syracuse 's first crew coach as well, as the school's first intercollegiate rowers took to the water. It was also in 1899 that Syracuse changed its colors from pea green and pink to orange and from then on became known as the Orangemen. Sweetland coached crew at Syracuse until 1903, when he resigned and was replaced by James A. Ten Eyck, Sr.

By March 18 of 1911, Harry “Dad” Vail was reported to be on duty as the crew coach. The Wisconsin State Journal reported, “All of the crew men like the strapping giant, who peals off his citizen clothes and gets into a gym suit to show them how to operate an oar in the shell.”

May 27 on Lake Mendota, UW faced the Minnesota Boat Club. While not imes were taken, the Badgers defeated their next-state rivals by two lengths. An inter-class regatta was held on the same day.

The 1911 crew was a hard luck crew. It set a new four-mile record on Lake Mendota (21:20) but when it reached the Hudson , things happened. The training period on the Hudson was a nightmarish affair with boils, infections and colds decimating the Badger ranks. The crew finally started the varsity race with a freshman substitute at No. 6 because every varsity reserve oarsman was ill. Wisconsin beat Syracuse to finish fourth, inches behind Penn for third place.

The Badgers, while at the Poughkeepsie Regatta, stayed in “The Elms” near the Highlands, on the western shore of the Hudson . 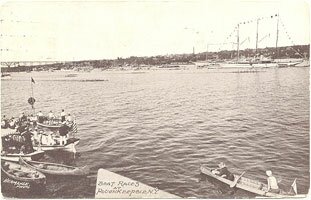