During our spring work, Captain Maurice Sjoblom was forced to leave the squad because of heart troubles and then No. 7 Samp resigned. Eddie Samp, varsity oarsman and football player resigned for undisclosed health reasons; he'd been expected to be elected the crew captain position vacated by Maurice Sjoblom. D. L. McLeod, a junior, was later elected crew captain. ... Samp, it was rumored, had been pronounced physically unable to compete in crew work by the medical department for the rest of the season.

These medical department' pronouncements were to be a pre-cursor to the banning of crew at UW in the summer of 1914 by the medical faculty until the spring of 1920.

On May 24, 1913, Wisconsin (6:40) beat the Minnesota Boat Club by six lengths on Lake Mendota ; the UW frosh defeated St. John's Military Academy the same day. The New York Times (p. 51) reported that the one mile course time for the UW varsity was 6:20 in this second race in the evening when, after the first trial in the afternoon, the 2-seat (Cochran) in the MBC eight caught a ‘'crab,' causing the shell to keel over, which in turn resulted in the bow-seat rower's missing the water entirely. Both men fell out of the shell and all hope of recovering the lead was gone. Wisconsin finished the course alone and was officially awarded the race.

The cover of the “Official Program” of the Annual Regatta, Intercollegiate Rowing Association 1913 advises:

Passengers on the Observation Train will please be silent when the crews are on the starting line in order that the Referee may be heard.

In the varsity eights, Syracuse (19:28.6), coached by Jim Ten Eyck (senior), beat a surprised Cornell, followed by Washington , Wisconsin (19:36.0), Columbia and Penn. In the four-oared race, it was Cornell, Penn, Columbia , Wisconsin , Washington and Syracuse .

In the four-oared race, Wisconsin was fourth, the race finishing in this order - Cornell, Penn, Columbia , Wisconsin , Washington and Syracuse . 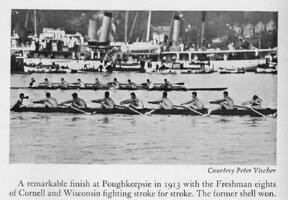 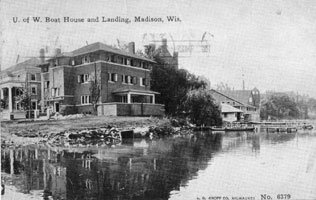 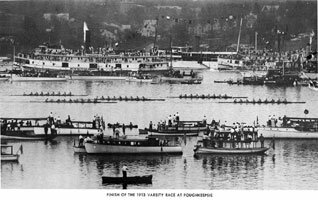