Results of the regular season schedule are not known.

In 1914, the IRA abandoned the four-oared (straight four or University Four) varsity race, replacing it with the junior varsity eight-oared contest.

New York Times of May 5, 1914 (p. 9) reported UW would be sleeping in tents, rather than staying at the Elms at this year's Poughkeepsie .

Wisconsin did not participate in the junior varsity eights until 1947, in which year the Badger's came in 8 th of 11.

The front page New York Times headline of June 27, 1914 read: “Columbia Wins Big ‘Varsity Race.” The article describing the four-mile event went on “To win Columbia had to kill off the much-flaunted Cornell crew and the Pennsylvanians. The race was between these three crews, and it was the brilliant watermanship of (Columbia Coach) Jim Rice's boys, backed with hearts of iron and a fighting spirit that refused to even falter, that gave Cornell and Pennsylvania a beating they will never forget. Syracuse was fourth and Washington , plugging along gamely, was fifth, with Wisconsin splashing and going as best they could (sixth).” 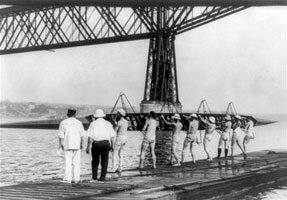