UW Prof. Pyre, No. 2 seat in UW's eight described in “The First Victory,” published a history of the University of Wisconsin in 1920. While a great rower and fan of rowing himself, Prof. Pyre is either expressing his pessimism for the sport's longevity or carefully lobbying for the sport's reconsideration when he wrote,

Notwithstanding the difficulties which attended the maintenance of rowing at Wisconsin, only the apparently conclusive proof of its injuriousness to the physical constitution of the participants could have justified the banishment of this otherwise beautiful sport from the realm of intercollegiate competition.

Just keeping the crew program going and energized was an important and thankless task. The Badger 1922 captured Coach Vail's frustrating personal mission when it wrote:

For Coach Vail, an accomplished rower in his youth and a well-regarded coach since, the many years of absence from the IRA's was a silent burden.

For the first time in seven years, varsity eights are eligible for inter-collegiate competition; crew is once again a major sport at the University of Wisconsin . “By 1920, the faculty relented and permitted two-mile races with boat club crews. This obviously reawakened the old spirit and some creditable crews were developed in 1920-23. (Finally in 1924, it appeared that Wisconsin again had some splendid oarsmen, and as further study had changed the conviction of the medical advisors, permission was granted to compete again at the Intercollegiate Poughkeepsie Regatta.)

Reinstatement of rowing marks the successful culmination of agitation carried on by various clubs and individuals in the University during the past year.

The Athletic Department had been in receipt of recent invitations to send a Wisconsin crew to compete against the eights of the University of Washington , the Duluth Boat Club, and the Lincoln Park Boat Club of Chicago.” Some time in 1919-20, the faculty relented and permitted two-mile intramural crew races.

Still without Wisconsin in 1920, the IRA's were held at Cornell College on Lake Cayuga in Ithaca , NY on a 2-mile course. Syracuse , under Coach Jim Ten Eyck, Sr. (see the chapter “The Ten Eyck Trophy”), won the varsity eights (Cornell was second) and was second to Cornell in the junior varsity and freshman eights. “To (Cornell Coach Charles) Courtney, the (varsity eight) defeat was a heartbreaker. It was disheartening for him to see a victory slip away on home water in the final moment. It was also his last race. Courtney died on July 17, after suffering a stroke of apoplexy at his summer cottage at Farley's Point on Cayuga Lake . Behind him, he left an imposing record: Of the 59 Cornell crews he sent to the IRA, 39 were triumphant.”

Bob Kane, in his history 1992 history of Cornell athletics, writes “Coach Charles “Pop” Courtney was born in the Courtney home, called The Castle, on Farley's Point, Cayuga Lake , and he died there. His teams - varsity, junior varsity and freshman - swept the IRA's seven times.” 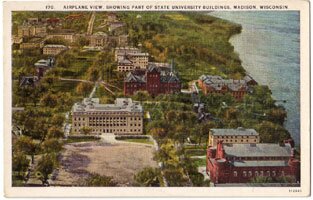