Wisconsin 's spring 1921 crew was the first team assembled after the Athletic Council lifted the ban on crew as a major sport (in part because the Poughkeepsie course had been reduced and was now three miles).

On June 25, 1921, on Superior Bay at Duluth, Minnesota, six thousand rooters, including many Wisconsin alumni, packed the stands to witness an heroic attempt by the inexperienced Badgers to defeat the International Champions (Duluth Boat Club) on a choppy course. (As the) Badger shell nosed out from behind the boat house, (both) the Duluth and the Badger rooters gave the lighter crew a hearty cheer.

Wisconsin drew the outer course. At the signal, Duluth jumped ahead into a half length lead. Both crews were pulling a 40 stroke pace. Wisconsin gradually pulled up and at the half mile mark the crews were even. The stroke had dropped to thirty-six, and the shells swept neck and neck down the stretch. At the three-quarter mark, the Badgers led by a man. The Duluth aggregation gradually drew up, but Wisconsin held, and, as the grandstand was approached, was only slightly behind. Then, as if by an automatic signal, within the last 100 yards, the famous Ten Eyck spurt, for which the Minnesota city has become famous, began. (UW) Coxswain Henley pleaded for more speed, but the Badgers had given their last ounce. Swinging in perfect form, at a terrific stroke, the American Champions crossed the line, winners by a length and a half.

Old followers of rowing claimed that never before had the waters of Superior Bay been cut by oars of a more plucky crew than those of the Badgers. The mile and a quarter stretch had been covered in the fast time of six minutes and thirty-nine seconds. It was no disgrace to the inexperienced Badgers (many candidates were ineligible and Captain Arthur Samp was injured) to lose the race, for this same Duluth eight later won both the National and Northwest International Championships, and finished the season undefeated.

The Duluth Boat Club met Syracuse last year for the first ever club vs. college dual meet; the DBC/Wisco dual meet will only be the second such club-college pairing. Against UW, the DBC was composed mostly of veteran men, most of whom rowed in the junior eight at the National Regatta last year in Worcester, MA.

Too much credit for the success of the crew cannot be given Coach 'Dad' Vail. With only a few men to work with, men who had had little or no experience (the sport having been banned by the UW Athletic Council from 1915 thru 1920), he developed a crew which did Wisconsin justice as the first Varsity Eight since 1914.

Let us hope that it will not be long before he will again be able to take a Wisconsin crew to Poughkeepsie and “Are you ready, Wisconsin?” will again be heard on the Hudson when the crews come into line.

Washington attended for the first time. 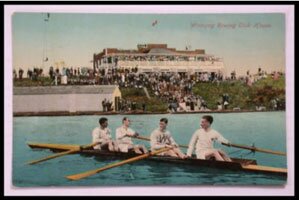 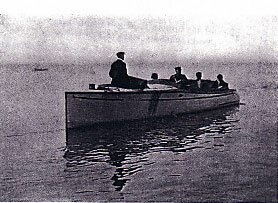