Wisconsin had a late start in spring practice and a “dearth of material” resulting in two varsity losses (to the Duluth Boat Club May 26, 1923 by a length and a half and to Washington University June 16, 1923 on a two-and-one-half mile course) and three JV losses (to St. John's Academy by ¾ of a length; to Culver Academy in Culver, Indiana by a half-length; and to Washington on June 16, 1923).

Against Washington June 16, the varsity kept abreast of Washington for half of the race until Washington called for increased stroke. The Badgers could not respond. In the last quarter-mile spurt, the Cardinal oars splashed vengeance and succeeded in regaining two lengths but lost by four lengths. Washington won the Poughkeepsie regatta two weeks later. About 4,000 alumni and students witnessed the race from shore and from barges. Wisconsin 's varsity boating: Crozier (bow), Gill, Klussendorf, Bentson, Okerstrom, Scheutz, Newcomb, Johnson (stroke) and Hanley (cox).

The Washington frosh eight also won their race against the Badger frosh. The Huskies frosh were rowing in the Husky , which had been christened a few hours before on Lake Mendota by former Washington crew coach Hiram Conibear's daughter Katherine. Encouraged by Washington crew coach, Rusty Callow, George Pocock had left Boeing sevedral months earlier to start his boat-making business. The Husky was the first boat built by Pocock. Coach Callow later encouraged the formation of the annual “Dad” Vail Regatta in Philadelphis for medium-sized colleges and new crew programs.

Further study had changed the conviction of the medical advisors who previously felt rowing made for bad heart conditions. As a result, permission was granted to compete again at Poughkeepsie . 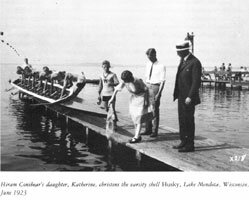 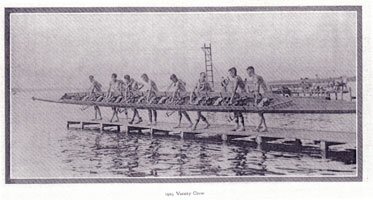