This writer's great-uncle (grandfather's brother), Lloyd R. Taylor (1900 - 1986), started school in the fall 1920 with the $2,000 proceeds of a war indemnity bond paid on the WW I death of his brother Douglas, worked out with the crew team while in college. With the help of teammates who had apparently encouraged the regular coxswains, by prior arrangement, not to come to practice one day, Taylor gained the attention of Coach Vail when the coach was seeking a coxswain. As Coach Vail was about to call off practice for lack of a coxswain, the rowers suggested Taylor could act as coxswain. Lloyd also acted as “Commodore” of the UW crew, which role included raising money from alumni and other crew supporters to help defray the annual expenses of running a crew team. When the family business required Lloyd to drop out of school around March of his senior year (1924), he was neither able to graduate from UW nor to “get to Poughkeepsie ,” a source of deep disappointment to him for the rest of his life.

Wisconsin will be represented at the nation's famous rowing regatta on the Hudson on June 17 (1924), by an eight worthy of carrying the Cardinal colors of Wisconsin . For the first time since 1913 (sic, actually UW rowed in the 1914 IRA's) the Badger colors will invade the valleys of the famous Hudson rowing course to compete against seven of the leading crews of the nation.

Through definite action taken by the Athletic Council, and through the efforts of Coach Harry “Dad” Vail, the Badger crew was permitted to take the trip to Poughkeepsie - a desire cherished by “the old man” for the past ten years.

Coach Vail started training for the great Eastern event early in April. A new shell was ordered from a Western concern which has made shells for Yale, Columbia and Washington Universities; the men were worked twice daily during Spring vacation, and through long hours of the afternoon preceding the race; a training table was established in Lathrop parlors and the keen eye of Coach Vail was ever watchful over the men in the shell.

The ‘On Wisconsin' spirit shall be carried to the shores of the Hudson - may the thousands of Badger Alumni who will see the regatta cheer the boys across the finish line A Winner!

One of the greatest crews in Badger history, and certainly the most spectacular since the famous “berry crate” crew. Led by powerful stroke Howie Johnson in the IRA's, Wisconsin sprinted to the finish, passing every crew but the powerful Washington eight, which won the race a bare half-length ahead of the Badgers!

UW brought only its varsity eight to Poughkeepsie in 1924, its first IRA competition since 1914. The June 18, 1924 New York Times headline read, “ ‘Washington Victor Again on the Hudson … 50,000 See Wisconsin Make Sensational Drive and Finish Only Two Lengths Behind.' Pennsylvania surprised the 50,000 spectators of the Hudson River regatta in winning the junior varsity and freshman races, but the big upset of the afternoon was provided by Wisconsin .

Any small boy in Poughkeepsie could have told you that Washington would win, but not even the experts dreamed that Wisconsin, a green and untried crew, would steal second place from the effete and now chagrined East. Like Stanford in 1915, Wisconsin lost the race but won the moral victory. For one thing, it was the first time since 1914 that a Wisconsin crew had appeared on the Hudson . For several years there was no crew at all at Madison and what material did appear in the last few seasons was raw and inexperienced, lacking the tradition and background that help make a good crew great.

But today that discounted Wisconsin team sent back to the Hudson with great misgivings on the part of the university that helped Washington make a complete victory for the West. It was a tribute to a beaten but glorious crew that the crowd at the finish line stood and roared their delight as the men of (UW crew coach) Dad Vail slid out from beneath the railroad bridge (just short of the finish), dug their blades a little harder and deeper into the water and uncorked a tremendous spurt that caught Columbia, caught Pennsylvania, drove Cornell into the rear and made second place safe for the Mid West.

For the fourth straight year, the first two places in the varsity event had gone to outside crews - crews graciously invited to the regatta by the four member universities of the Intercollegiate Rowing Association. Not since 1920, when there were no Washington and Navy and Wisconsin crews to intrude on the happy scene, has Cornell or Columbia or Syracuse or Pennsylvania won the regatta that they established back in 1895. You may call it biting the hand that feeds you: tonight the East is not sure what it should be called, except that they are finding it just a bit monotonous to have the invited guests come to the party and go away with the family plate.

As described in Wisconsin Football Facts Season of 1948 and Centennial Sports Review 1848-1948 (p. 85), that 1924 varsity crew was one of the greatest in Badger history. The oarsmen were of all sizes and physical types, but each had condition, conviction, and intestinal fortitude. Only the fact that they had started their finishing sprint too late seems to have robbed them of a victory at Poughkeepsie . Wisconsin trailed the pack by the end of the second mile then Howie Johnson, a magnificent stroke, raised the beat and the Badgers set sail for the lead. It was a fine effort. Wisconsin cut down every crew but the great Washington eight which won the race, a bare half-length ahead of the Badgers (over 3 miles).

The number 3 seat for Washington was rowed by Harrison “Stork” Sanford in the (“Rusty”) Callow-coached boat. At a future date, Sanford would be coach at Cornell and bring back the Big Red to the height established by Courtney. In August of 1924, after the IRA's, Walter Camp, surprised the rowing world by supporting the cause for shifting the IRA from the river to the lake where comparative records, on flat dead water, can be relied upon. Diminishing crowds at Poughkeepsie were of major concern in 1924, with less than 50,000 witnessing the IRA regatta.

Howie Johnson, UW's stroke over the 1923-24 season, is generally considered to have been one of the best in Badger crew history. 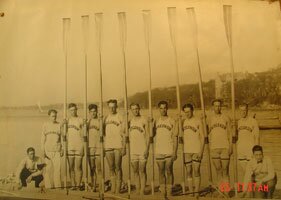 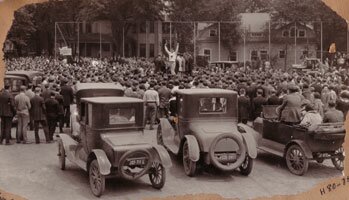