At Coach Vail's death, it seemed that Wisconsin 's rowing crisis had been reached and that there would be little reason for engaging a successor unless the sport again could be put on a stable basis. So the decision in regard to a coach was more than that - it was, in reality, a declaration of policy involving the whole future of rowing at Wisconsin

When George W. “Mike” Murphy, former Washington crewman, was called from Yale where he had been freshman coach for five years, he took over as head of a rowing department that was given new life. The Wisconsin Athletic Council announced that herewith it would support crew adequately, send the varsity to Poughkeepsie each year, and, as soon as possible, send the freshmen. In addition, it was enlarging the facilities for crew training.

In the fall of 1928 school year, the Wisconsin Crew Corporation, with membership limited to varsity and numeral winners, was formed. Franklin L. Orth, stroke and captain in 1928 conceived of the idea and he and Class of 1928 President Harry Thoma drew up the original articles of incorporation. The original officers were Curran C. McConville, captain of '98 crew and coach for the 1898-99 season (President); Walter Alexander, crew captain 1896 (Vice President), and Harry Thoma (Secretary-Treasurer). Franklin Orth (and L. Kingsbury, No. 2 seat who graduated last year) was coaching the crews after Dad Vail's passing “until Murphy came about January.

The original purposes were (1) to foster and develop an organization which would assist the crew at the University of Wisconsin ; (2) to weld together all Wisconsin crewmen, as well a other loyal supporters of rowing, and (3) to raise funds for new shells, rowing tank, boat house, and other rowing equipment.

Construction of an inside rowing tank was approved by the Regents but its erection deferred due to lack of funds.

Early in the season, the frosh lost to St. Johns Military Academy .

Wisconsin (11:08) raced Washington (11:02) on a two-mile course on Lake Mendota and lost by one length (Ihdes' notes in Kelley book suggest ¾ length).

Murphy's first UW crew (11:08) in 1929, which finished fifth at Poughkeepsie, lost its only other start to Washington (11:02) on Lake Mendota by less than two lengths on a two-mile course, after leading the Huskies to the first mile buoy on Lake Mendota.” Some 20,000 spectators, the greatest crowd that ever saw a crew race, lined the Madison shore of the lake. 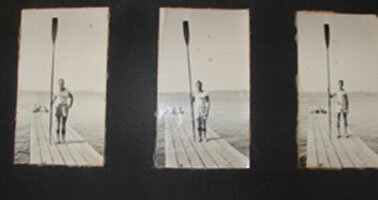