The Wisconsin varsity crew will go East to compete in the Poughkeepsie regatta on the Hudson June 16, it was announced today. The decision was reached by the University of Wisconsin athletic council after three hours of discussion regarding the method of financing the trip. The council assumed responsibility for the financing, but would make no statement as to the method to be used to raise the necessary $3,800.

Director of Athletics George Little made a favorable report after investigating the athletic budget, and this was one of the chief factors in the final vote to send Coach Mike Murphy and his oarsmen to the races on the Hudson . No action was taken regarding the proposed race with Pennsylvania and Princeton two weeks before the Poughkeepsie regatta. Last year Penn's varsity came here and defeated the Badger senior shell by a slim margin in a colorful race on Lake Menona .

At the time it was expected that this would be a home-and-home arrangement, with Wisconsin meeting Penn at Philadelphia this season, but Coach Rusty Callow of the Pennsylvania crew has not insisted on the race being staged. With the Badger athletic finances somewhat depleted, it is highly improbable that Wisconsin will send a crew to this race.

Although the crew had not performed at home during the entire season, interest was greater than had ever been shown in recent years. The students planned a giant send-off when the crew entrained to start to Poughkeepsie . Several hundred students marched to the station, pulling the crew in the historic “red wagon,” and amid the cheers of the students, Lieutenant Governor Henry Huber wished them success on the part of all people of the state.

April 10, the Athletic Board agreed to accept the annual invitation and send UW's crew to Poughkeepsie . Walter L. Alexander, a member of the council and a former crew captain in 1896, announced the gift of the Wisconsin Alumni Association; the shell will be ordered from the Seattle-based Pocock Boat Company and will cost an estimated $1,500. Alexander and WAA head Herman L. Egstad, Secretary of WAA, assumed the lead in providing the new shell.

To raise money for the crew's annual Poughkeepsie expenses, a Button Sale was held during the spring of 1931, a fund-raising crew race was announced by Franklin Orth, freshman crew coach. The varsity will race against the JV-8 and the freshmen will break into two eight boats to compete. Approximately 75 people are working on the drive, with many of the buttons being sold to campus sororities and fraternities. Fred L. Maytag ('33) heads the drive.

April 21, the Prom donated $250 to the crew “to put the crew on par with competing schools.”

The JV8 had no races and included Bill Hovey as stroke and Sam Berger as cox (Ihde notes).

Another step in better identifying crews on the Hudson was introduced by the IRA in 1931. Besides painted blades and coxswain's colored jersey's, each crew was required now to carry a small flag of its college perched on the bow of the shell. Quite unexpectedly in the varsity race, Navy became the ruler of intercollegiate seas. To win in the downpour, the Midshipmen edged out Cornell, the heavy favorite, and then thwarted a stirring bid made by Washington . Navy's victory without question saved Coach Dick Glendon from loss of his job due to a losing spring season.

The crew will not enter the Poughkeepsie Regatta, but it is expected that funds will be available to enter it in the Olympic trials. 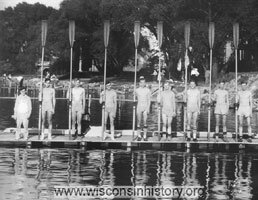 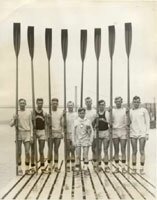