Miles of work…in shell and on the rowing machines….for
the shortest competitive season of all Badger sports.”

No sport offers a longer season - from the opening of school in September until the year's conclusion in June - than crew. No one has ever attempted the almost insurmountable task of estimating the amount of energy expended by crew candidates. Rowing machine shelved in the (Red Gym) gym annex in the fall and winter and long shell on the lake in the spring are the scenes of activity.

A crew that was not better than average and a much-slashed athletic budget caused the elimination of the usual trip east to Poughkeepsie. Instead the Badger eight competed in a new event - the Ohio River Regatta.

The Milwaukee Rowing Club eight (mostly older rowers) came to Madison for the first test of the year, and offered little to a Wisconsin varsity and freshman fleet that showed little respect for the old veterans who made up most of the visiting eight. About 2,500 persons lined the university lake shore to see the only local race of the year, and they watched five Badger boats cross the finish line before the tired Rowing Club crew pulled across the finish line. The order of finish in the six boat race was - Wisconsin varsity, the junior varsity, the second, first and third frosh crews and the Milwaukee Boat Club finished in that order. The visitors did little more than challenge the last of these. (Time: 5:33 on a one mile course. ).

The Badgers left Madison by train for Marietta , Ohio and slept in ‘sleeper' cars with bunk-like beds on either side of the aisle; the baggage car carrying the shell was behind the sleeper car. The night before the race, the fraternities and sororities of Marietta College serenaded the visiting crews from Penn and Wisconsin .

Wisconsin met Pennsylvania and Marietta College in the Ohio River race, held at Marietta , Ohio , for the first time. The trip was not especially long, but only the fact that the town's businessmen paid the expenses allowed Wisconsin to compete. The Badger boat finished second to Pennsylvania , trailing by two lengths the victors who were timed at 10:23 for the four (sic, two miles) pull. Marietta 's eight was four lengths behind the winner. A bad lane was credited with hindering the badger effort.

June 18, UW took on the Minnesota Boat Club on Lake Mendota over the Henley distance of 1 5/16ths miles.

Choppy water hampered the oarsmen while a quartering wind off the stern aided to a certain extent. The men were forced to swing their oars high out of the water in order to ‘feather' properly. Stroke Fred Emerson, Jr. stroked a magnificent race and had the Badgers out in front by better than half a length at the very start when he sent his eight away to a perfect racing start. Wisconsin dropped to 30 and the losers had trouble getting off a short 28.

When Wisconsin raised the beat to 32, ( Minnesota ) stroke Johnson tried to raise the Boat Club's pace but to no avail. The Badgers finished with a steady, powerful 34 and Minnesota finished with 30, losing ground all the way. Wisconsin was in excellent condition at the finish. Wisconsin 's boating: Bryant (bow), Eckhardt, Metz , Helmke, Captain Smedal, Silbernagel, Tessendorf, Emerson (stroke) and Berger (coxswain).

Saturday's race may be the last for a Wisconsin crew for some time if the regents follow a recommendation of the athletic board and suspend the sport except here on an intramural basis.

Announced June 4, 1932, the Athletic Board approved honor awards to members of the varsity and junior varsity crews and the tennis team and freshman numerals in wrestling.

Wisconsin did not attend for lack of financial resources in the Athletic Department's budget.

What makes a good coxswain:

That loss was our coxswain's fault. He had too little racing experience. When the coxswain wants the stroke pace increased, he raps the ‘knockers' (wooden cylinders in each hand) on the side of the boat at a faster beat. He never had us sprint. He didn't know quite what to do.”

Wisco (near lane) at Marietta 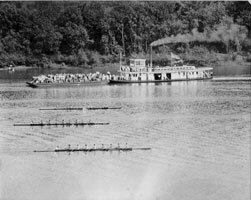 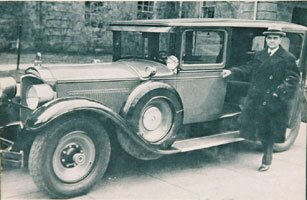