In the depths of the depression – and with a contoversial UW President, Glenn Frank, slashing budgets everywhere – crew coach Mike Murphy was asked, and Murphy agreed, to accept a salary reduction from $5,000 to $1,500 per year until the Athletic Department was in surplus.

'I'm sorry fellows,' Murphy said to more than 60 rowers at a November 1932 meeting in the old gym tower Friday afternoon. 'The athletic council has refused to give us appropriations, and there will be no letters and numerals at the end of the year.' Mike Murphy paused for a moment and looked around the room. Everyone was serious. Their chances for earning a “W” in intercollegiate competition were gone.

In the crowd there was material for a great crew; practically the same crew that broke the mile sprint record on Lake Mendota established by Washington in 1930; a crew that might sweep a cardinal shell first over the finish line at poughkeepsie this year. Co-captains Tessendorf and Silbernagel, emerson, Helmke and others sat up a trifle straighter. It was hard to hide the surprise and the tinge of disgust that they perhaps felt at the disclosure of the council's action.

In January 1933, The Daily Cardinal writes,

60 men turned out to hear Coach Murphy outline this year's crew program at the first meeting of the year in Science Hall Friday evening. Although the outlook for many inter-collegiate races is very dim, this year's crew will take to the water sometime next week. Everything depends on the outcome of football gate recepts, for although crew is one of the most economical sports offered, its budget is extemely low and it is now operating on the intramural funds.

Murphy has been having his sleepness nights, not only during the actual season, but ever since he has come to Wisconsin . Mike nearly lost his position last year, but after bringin forth some good figures proving the low cost and the success of crew up to last year, heretained his position.

Special attention will be given all freshman candidates, for, though the varsity of this year may not be in an inter-collegiate contest, the status of Wisconsin crews will be sure to change in the next few years after the depression. All freshman interested in this healthful sport should take the full advantage of the chances offered them, coach Murphy says.

Senior Paul O. Eckhardt, Jr. (a port, No. 4, in the 1933 varsity boat), author of a summary history of the Wisconsin crew in the June 1948 UW Alumni Magazine , cited throughout this writing, advises the varsity crew had two races in 1933, both on Lake Mendota. “Few crews, including Wisconsin , had any money to travel to a competition. We raced the Milwaukee Boat Club and the Lincoln Park Boat Club that spring, and defeated them both, but UW didn't participate in any intercollegiate races.” The UW Centennial Sorts Review - 1848-1948 records Wisconsin defeated the Lincoln Park BC by one and one-half lengths over a Henley distance (1 5/16 miles) in a time of 5:52.

The UW freshmen also defeated Park Junior Varsity of Milwaukee by six lengths in a time of 5:53.

For the second straight year, Wisconsin declined early to accept its invitation to the IRA's. No. 2 or 4 seat Paul O. Eckhardt, Jr., remembers to this day the crews deep disappointment at UW President Glenn Frank's decision not to allocate any of the university's budget to support the team's trip to Poughkeepsie for both years 1932 and 1933.

No IRA was held this year. At January 13, 1933, only three teams had signed to attend ( New York Times , p. 20); the race was later canceled due to economic pressure on most teams during the depth of the depression. Pressure on crew programs continued to be felt at several universities, including Syracuse. 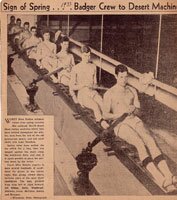