Although the season of 1934 was exceptionally lean - only one varsity race and two freshman pulls run off - the material was graded very high. At the close of the 1934 season, Murphy resigned as coach and Ralph Hunn, 1933 coxswain, was appointed as coach.

May 19, the UW frosh, in a 1¼ -mile race on Lake Mendota against St. John's Military Academy , led most of the way. Both crews took a long time to get off to an even start. St. John 's (6:50) military boys flashed by the young Badgers (6:51) with 200 feet to reach the finish five feet ahead of the Badgers. The victory marked the 10 th time in the last 11 starts that St. John's had beaten the Badgers. The yearlings last won a spring ago.

On the same day, in the Mother's and Father's Weekend Race, the varsity split into two eights and competed. The “Reds” (Stampen, Gitzin, LeVeen, McClain, Ivins, Zielinski, Leopold, Heun, Hale and Hale (cox)) achieved a two length victory over the “Whites” (Kramer, Rosten, Capt. Helmke, Olson, Falk, Kaska, Sutten, and Huhn; Clarke Smith may have been the “White” coxswain); the times were 5:26 and 5:38 respectively.

UW raced and twice won against each of the Milwaukee Rowing Club and the St. Louis Boating Club.

Note: In 1934, the orignal race in what would later formally become the “Dad” Vail Regatta was held at Marietta , Ohio . The first place “Dad” Vail Trophy was won by Marietta College . Penn's sub-varsity was second (under Coach “Rusty” Callow, who hosted the regatta and who donated the “Dad” Vail Trophy), Rutgers was third (under former UW coach Ned Ten Eyck) and Manhattan College was fourth (under future UW coach, Allen “Skippy” Walz.

Wisconsin again did not attend, probably for lack of financial resources in the Athletic Department's budget.

Crew Coach Mike Murphy resigned (in June) after a five-year (sic, six-year span) span of UW crew “in the doldrums.” He also probably felt not being allowed to get to the IRA's for three straight years made the position less than interesting. 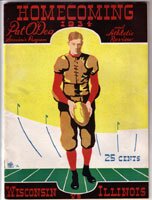