On November 11, 1934 , legendary Wisconsin football great was celebrated at the half-time of the Wisconsin-Illinois game, after having disappeared for 17 years (1917-1934) while living under the alias ‘Charles Mitchell.' Patrick's brother Andrew, UW's first full-time crew coach (1894-1906, but for a year awat trying a coaching position at Harvard), was unable to attend, even though he hadn't seen Patrick since 1903.

On May 22, Wisconsin 's varsity ( 6:31 ) defeated Marietta College at Marietta by seven lengths over a two-mile (2,000-meters?) course. Charles Burroughs remembers Coach Hunn was too ill, perhaps with a kidney malady, to attend the race. He stayed back at the hotel in bed.

Burroughs also remembers Don Wiggins was their varsity coxswain and a good one. A second-level coxswain somethines manned the ropes however. The gentleman had the habit of trying to look for shade along the shore of Lake Mendota and to tell the crew to “back down” towrd the shore looking for shade. He became know as “Backer down” Keikland.

Against California in Madison , Wisconsin lost by 2½ lengths and six seconds in a two-mile race.

Pennsylvania , one of the three original members of the IRA withdrew from the regatta after 60 years! It claimed its crews were unable to train for four-mile races; and that the four-mile course gave western crews an advantage. Penn remained absent from the IRA regatta until 1947 when the course was returned to three miles in length.

Washington (18:33.6, a record), Navy, Cornell, Syracuse, California, Columbia and, by a few feet, Wisconsin (19:25.8), which brought no junior varsity or freshman boats, was in Lane 4. Washington swept all three races for the second year in a row, the first time in modern rowing records.” Captain Heinze (4-seat) remembers one of his mates, perhaps the No.1 seat, catching a crab which nearly threw him out of the boat and stopped the shell cold. Absent the crab, it was felt the crew might have finished 2 or 3 places higher. Wisconsin was in 4th place leading up to the one mile mark and slipped to 6 th at that point. By the 2½ mile mark, UW dropped back and stayed in 7 th when finishing the four mile race. 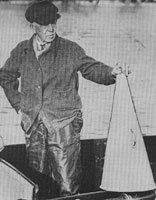