February 14, Coach Hunn went back to 1895 for a precedent enabling him to get an early start on the water. In 1895, Wisconsin 's oarsmen practiced on the Yahara River - practically straight, 9/10ths of a mile long and open all winter - but no coach since Andrew M. O'Dea had attempted this until Hunn. A new shell also awaits the crew when they get on Lake Mendota , as the second Pocock boat in two years has been purchase. This one costs $1,200.

Coach Hunn produced a better crew in 1938, one that was in superior condition, probably due to an early start in training outdoors on the Yahara River , February 14, instead of the usual mid-April beginning. The preparatory rowing schedule, however, was upset by cancellation of scheduled races with Detroit Boat Club and Marietta College crews.

May 7 to 30, Art Bridge , business manager of the 1938 Badger and senior member of this year's varsity crew, has been named head of the “On to Poughkeepsie ” drive announced by Coach Ralph Hunn. Bridge then announced the Button Drive would cover the whole state.

Coach Hunn, with the full cooperation of Prof. Guy S. Lowman, director of intramural athletics, had built up an intramural contest of 30 fraternities and 6 dorm crews to race in a four-oared shell with coxswains.

The UW freshmen ( 7:10 ), against a headwind on May 23, defeated St. John's Military Academy over a 2,000-meter Lake Mendota course. Later, The frosh ( 5:17 ) also defeated Culver Academy by 2½ lengths over a one mile course on Lake Maxinkuckee . Jim Ivins was UW's frosh coach.

As result the varsity schedule cancellations, the only tune-up for Poughkeepsie was a race on Lake Mendota with Washington 's Huskies. On June 18, Washington visited Lake Mendota 's 2,000-meter course on their way to th June 27 Poughkeepsie Regatta. Washington 's three eights - defending champions all from last year's IRA - swept the Badgers in Madison . The varsity result was a Washington (6:15.5) victory over Wisconsin ( 6:31 ) by four lengths. The Husky JV-8 (6:19.2) won by 3½ lengths over the Badgers (6:32.8). The Wisco ( 6:39 ) frosh also lost by 3 ½ lengths to Washington (6:23.5). Badger stroke and captain Ed Collins, who had rowed for three years at St. John's Military Academy before college, was ill and put in the Wisco JV-8. Coincidentally, Washington 's veteran No. 3 seat, Don Hume, was also put in their JV-8 after illness.

The Milwaukee Journal described the races:

Although his Wisconsin crews were beaten decisively in three races by the University of Washington 's mighty oarsmen Saturday morning on Lake Mendota , Coach Ralph Hunn saw encouragement in the magnificent job that Captain Ed Collins turned in as stroke for the junior varsity.

Relegated to the “jayvee” because of a sinus infection, Collins stroked a mediocre junior varsity across the finish line within two seconds of the Badger varsity's time. He will be back at stroke for the varsity when they resume rowing Sunday afternoon at Poughkeepsie , N.Y. The varsity heretofore has been about 12 seconds faster then the junior eight.

Dave Rendel and Bob Rosenheimer, sophomores rowing at No. 6 and No. 4, respectively, were the most impressive of the varsity men.

Wisconsin and Washington left Saturday afternoon for Poughkeepsie , where they will compete in the annual regatta June 27. Wisconsin took only its varsity oarsmen and two substitutes. Washington 's varsity, junior varsity and freshmen crews made the trip.

In the spring of 1938, through the support of UW oarsman Paul O. Eckhardt, Jr. ('33), the UW Alumni Association of New York sold tickets to members for the Observation Train ($5.25 each)

Wisconsin 's Badgers were forced to launch their shell to get to their quarters. The boys got off the train at Poughkeepsie and rowed their craft across the river to Highlands and then made the long trek to “ The Elms ” where they will reside for the next week.

The race positions for the four-mile race, starting at Krum Elbo on the Hudson River, had Wisconsin in lane 1, Washington in 2, Columbia in 3, California in 4, Cornell in 5, Syracuse in 6 and Navy in 7. A crowd of 80,000 was expected. UW's boating: Ray Picansky (bow), Ed Ryan, Harry Stroebe, Bob Rosenheim, Art Bridge , Fred Kraatz, Don Krause, Ed Collins (stroke and Captain) and Don Wiggins (coxswain).

The Badgers set a lap (2 mile) record of 9:10 and its time for the four mile race, though fifth best, was only one-fifth of a second slower than the previous record.

Immediately after the varsity race, the Wisconsin crew, tickled with their performance, though finishing fifth, got together and elected Ed Ryan, of Durand , Wisconsin , as 1939 captain. The new Badger pilot rowed in No. 2 in the Badger shell the past year. The Badger crew will be feted at a dinner in New York tonight by the New York Wisconsin Alumni club. After that the crew will stop off in Washington D. C. for several days of sightseeing before returning home.

Coach Ralph Hunn, the 27-year old Badger coach, whose crew last year returned to the regatta to place last, was very pleased with the performance of his men. “Considering the experience we've had, it makes us all feel pretty happy over finishing ahead of Cornell and Syracuse and being able to set the pace for half the race,” he said. “We'll do even better next year.”

On July 2, the mid-American regatta was scheduled on the Ohio River at Marietta . Results are being researched. 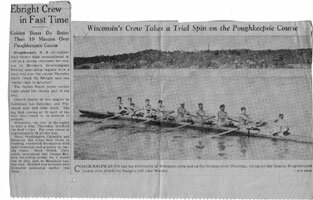 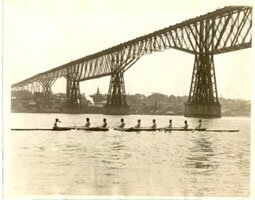 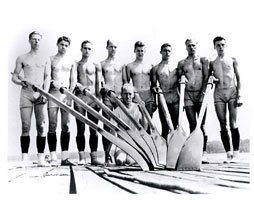 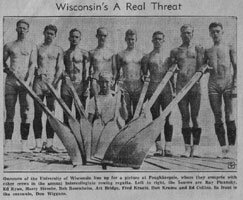 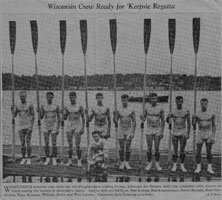 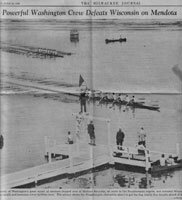 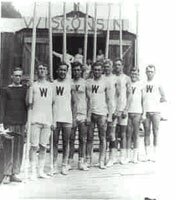