On February 10, 1939 , the “Dad” Vail Regatta for Division II and beginning college crews was formed, after four years (1934-36 and 1938) of awarding a “Dad” Vail Trophy, given by Coach “Rusty” Callow at Penn. At the “founding” meeting of the “Dad” Vail Regatta Association were Athletic Directors and coaches representing four colleges ( Dartmouth , Boston University , Rutgers and Manhattan Colleges . Future UW crew coach Allen Walz represented Manhattan and was elected Secretary-Treasurer.

March 23, 1939 , the Regents of UW approved the purchase of Picnic Point. The land has a shoreline of approximately one mile and stretches one-half mile into Lake Mendota across University Bay from the Wisconsin campus.

Wisconsin was again the only Big Ten university to sponsor a crew in 1939, holding to a tradition that had its inception in 1892. The Poughkeepsie Regatta was the climax event of the year, following two dual meets which did not constitute enough practice to mold an experienced unit.

Although Coach Ralph Hunn was still optimistic concerning his eight's chances for a high place I this annual high-spot of the nation's sports schedule, his men were outclassed by the heavier Western and Western outfits. Wisconsin did, however, turn in a four-mile trick in a time faster than they had ever stroked before. This still was an excellent showing, when one considers that the Badger crew was at a training disadvantage because of the freakish Madison weather. Hunn attempted to beat the rain gods by setting his men to work on the Yahara River, but this was nor a suitable answer to the problem.

The boys worked hard and won their first test of the year in a Parent's Weekend Regatta against the Detroit Boat Club. The varsity started fast this time, and finished seven lengths ahead. The time was 6:51 . On the same afternoon, the jayvees defeated the senior eight of Lincoln Park Boat Club of Chicago, and the varsity second out-stroked the top freshman crew and St. Johns Military Academy .

The freshmen had an active season.

For the first time in 12 years, the freshman crew left for Poughkeepsie . One stopover was made for a test at Syracuse against the strong Orangeman and Hunn's (varsity) squad extended their hosts to the limit, finishing one length behind because a motorboat wave swamped the frail shell midway in the race. The yearlings (freshman) won four of five meets on their schedule, defeating St. John Military Academy twice, the Milwaukee Boat Club and Lincoln Park Boat Club.” “They defeated the Milwaukee Boat Club senior eight. St. John's Military Academy fell later. In a triangular meet, UW's freshmen defeated St. John's Military Academy and Lincoln Park Boat Club. Culver Academy defeated the Badger frosh and later, the frosh won over the Lincoln Park junior eight.

At the IRA's, Wisconsin seemed to share Columbia 's crew house on the shores of the Hudson (see the photo of Paul O. Eckhardt, Jr.) 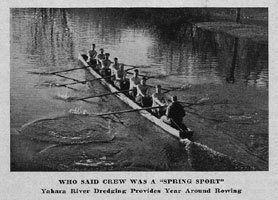 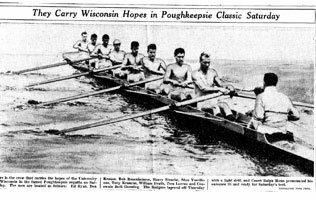 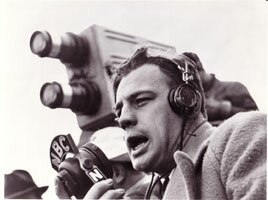