The Wisconsin Alumnus of November 1939 (p. 47) reports the completion of the summer's dredging of the Yahara River which “Should prove to be the biggest aid to crew at Wisconsin since the present lightweight shell was first introduced at the Badger institution. The Cardinal crewmen will now row all the year round and Coach Hunn has not hesitated long in taking advantage of his new asset.

George Rea remembers winter training on the Yahara. “A truck would take the squad to the river, where practice boats were stored, and the athletes would have to run back to the armory. Because Lake Monona was generally more free of ice, the Yahara and Lake Monona could both be used when Lake Mendota was iced over or too rough. If there was no Yahara/Monona workout, we would row on the rowing machines in the loft of the armory plus run the Armory indoor track.” Mr. Rea also remembered using the 16-seat barge to learn how to row as a freshman in the fall of 1939.

In a December 13, 1939 letter from the Wisconsin Crew Corporation, Secretary Harry Thoma advises the creation of a new trust fund, apparently initiated by WCC director donations of $1,000, toward the building of a new boathouse. The building of a new or expanded boathouses can be seen as a constant and on-going effort for the sport.

Although the crew was hampered by an unusually late spring, they got off to a good start at Pittsburgh, where they came in second, trailing Pennsylvania by only a few feet over a 2,000-meter course. The next day the boys stopped in at Detroit, where they made a clean sweep of the field of boat club crews, with the varsity winning by six lengths over a three mile course.

On May 19, the UW frosh rowed against and defeated the junior varsity.

On the way back from Pennsylvania , the crew stopped in Detroit and defeated the Detroit Boat Cub in a one-mile pull on the Detroit River . The Badger four man crew also won. The Ecorse Boat Club also participated in the race events.

The Badger frosh defeated St. John's Military Academy on May 25.

Coach Hunn was released by Athletic Director (and head football coach) Stuhldreher on April 30, 1940 for undisclosed reasons. It is not clear who then headed the UW contingency to the IRA's.

The trip East to Poughkeepsie was not quite as successful. On the way they stopped at Syracuse , where they were beaten June 6th by a fine Syracuse boat. 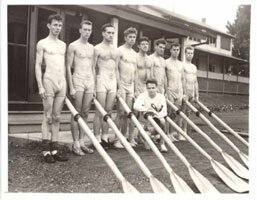 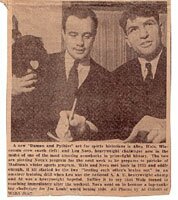