In the fall of 1940, Allen Walz was called to Wisconsin as head crew coach. Walz introduced some startling innovations in stroke and coaching technique and his 1941 crew, along with the frosh outfit, made Wisconsin rowing followers sit up and take notice.

Roy Rom also remembers Walz had an interesting method of recruiting oarsmen. He would go to basketball practice and every time a man was cut from the basketball squad, Walz would talk to him about crew.

Over the winter, Carl Holtz, who'd tried out for the UW football team, was spotted by crew coach Allen Walz while Holtz was taking a physical education class at the armory.

When the Venetian night water carnival was revived after a decade, Wisconsin 's varsity and freshman eights were the feature of the carnival. The frosh, having beaten the varsity regularly, was favored.

May 24, the first and second frosh were scheduled to travel by bus and meet Culver Military Academy in Culver, IN. Against Culver Academy 's varsity, Wisconsin 's frosh (5:01.7) prevailed by 10 lengths on the one-mile course, while the second frosh trimmed the Culver 2V by about seven lengths

Badger lightweight (third) freshmen tripped by St. John's Military Academy by six lengths in a one mile race in Madison .

The Wisconsin Crew Corporation noted that an unpaid balance of $750 was still dur George Pocock on a shell purchased by the Corporation three years ago.

On May 30 (Decoration Day), the Badgers took on the Lincoln Park Boat club and won at the Henley distance in 6:40 vs. 7:10, again rowing against unfavorable conditions caused by high winds and bad water. In another undated/unlabeled account of the same race, the frosh eight (6:41) were credited with winning over the UW varsity (6:46, which caught a crab at the last 1/8 th of a mile, while Lincoln Park was third at 7:45. The regatta opened with Carl Schurz high school of Chicago beating Wisconsin 's third frosh crew, when the latter swamped in rough water. The Badgers had had a good lead at the time. The start at Picnic Point was then shifted to a Tenney Park start.

Wisconsin 's frosh four defeated the Lincoln Park four in the second race over a mile, winning 6:02 to 6:58. The Wisconsin second freshmen (5:40) then defeated Waller High School of Chicago. A four-oared fraternity competition was also held.

On June 7, the Wisconsin Crew Corporation met at 3:30 pm in the Memorial Union, watched practice afterward and attended dinner with the coaches and the squad.

On their way to the Poughkeepsie Regatta, June 14, Wisconsin stopped in Chicago . Against Washington (June 15, 1941), the Badgers lost a mile race to the Huskies by one-half length in an exhibition race at Chicago . In the freshman race, Wisconsin defeated Washington by a half-length in a one mile race. A crown of 15,000 swarmed the banks in a drizzling rain to see the Huskies barely nose out the Badgers after racing even most of the way. Washington, last year's winner of the Poughkeepsie Regatta, had a time for the mile was 5:16.4. In a preliminary race, the Washington and Wisconsin junior varsity eights raced to a dead heat in 5:04.8

Rutgers sends its first crew to the Poughkeepsie Regatta. Wisconsin crews were quarterd in the Nvy boathouse, which, because of the war program, were available because of Navy's absence from Poughkeepsie this year.

Roy Rom remembers there was not much money in the travel budget so, at Coach Walz's suggestion, he hid in the coaching launch, the Dad Vail , which was soon thereafter loaded onto the baggage car along with the shells and gear. He then rode the train all the way to Poughkeepsie , a two-day trip. He had also made a deal with Walz to train the reserves in the pickle boat, wash dishes and set the tables for the crew.

On the Hudson a few days before the June 25 th IRA's, a boat of mostly UW coxswains won the first annual coxswain's race of one half mile in a four-oared gig. The boating: Jud Walstead (varsity cox in the No. 1 seat), Art Jones, Cornell's JV cox (No. 2), Ron Rom, a back-up UW freshman cox (No. 3), Bob (“Bobby”) Moore, UW frosh cox, (No. 4) and Jack Gunning (UW's '40 varsity cox), UW freshman coach, as the coxswain. Second were Columbia and third was a combination of Rutgers and Syracuse . The heaviest man in the boat was cox Gunning, according to Rom.

Coach Walz, in a letter apparently written while on summer military duty in Kankakee , IL , described the race, “The ‘Corn Whiskey' crew, handicapped by the heavily constructed gig, soon found itself in last place. However, Jack Gunning, who handled the yoke liner, called for a long steady beat, and once the coxies got their heavy boat rolling, they passed crew after crew until they crossed the finish line with open water on their nearest rivel.”

Ed Chudik, a reserve oarsman from the freshman eight, was suffering from poison ivy contracted while painting a huge red “W” on the rocks on the western shore of the Hudson River . Roy Rom was part of the group that crossed over the river from their quarters in the Navy boathouse on the Poughkeepsie side of the river (UW was assigned the boathouse when Navy did not attend the 1941 IRA's) and painted the large red and white “W” on the rock face of the Palisades . Rom remembers seeing the “W” still on the rocks 10 or 15 years later when passing by.

The Badgers had a boathouse for the first time in years, borrowed from Navy which is not competing because of the war situation. The location is three miles up the river. Navy's layout consists of two buildings. One is the boathouse. Overhead it has showers, rooms for coach and faculty men and a small dormitory. The other building, connected to the boathouse second story by a bridge, has a kitchen and a big dining room-lounge on the ground floor and one big dormitory upstairs.

Also training in the UW “pickle boat” was 200-pounder Lou Nova, a fighter scheduled to meet Joe Louis in a challenge for the heavyweight championship in September. He was a friend of Badger coach Allen Walz. After winning the national and world amateur heavyweight boxing title in 1935, Nova went professional and twice defeated former champion Max Baer. (Note: At New York's Polo Grounds on September 24, 1941, Louis retained his heavyweight title when he defeated Nova in the 6th round on a TKO.) Nova, having attended Sacramento Community College where he threw the javelin and the shot put, rooted for California in the varsity race and Wisco in the freshman race

Freshman cox Roy Rom remembers Coach Walz as having a great touch for publicity and for tricks. Examples of his touch for publicity included Walz's inviting Nova to train with UW's “Pickle Boat” and then inviting four sportswriters, including New York Times' sportswriter Allison Danzig, to row in the “Pickle Boat” with Nova; frosh cox Roy Rom coxed the “Pickle Boat” during this training. As for tricks, Walz had the crew rub down at least the varsity boat with graphite for better speed on the water, making the boat completely black on the bottom.

Wisconsin 's frosh eight, with Carl Holtz and coxed by Bobby Moore , came in second (time of 10:34.4) in Poughkeepsie a length and one-half behind Cornell. As described in the New York Times of June 26, 1941 (p. 28.), “In the freshman contest, which opened the regatta, Wisconsin put in a real bid and so did Syracuse, but Cornell came from behind in the last quarter mile with a superb bit of rowing and nailed Wisconsin, Syracuse, Princeton, MIT and Columbia, respectively.”

After the races the entire party went to New York City . We returned to Chicago on the 20 th Century Limited, an overnight train and when the conductor comes around, tell him that the coach has all the tickets. The idea was to so confuse the conductor that he never got an accurate count and accepted Walz's word on the 25-man Badger head count. 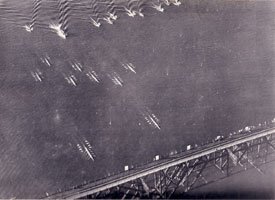 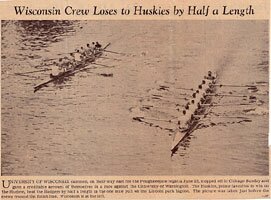 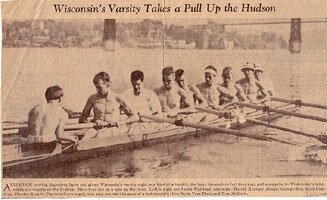 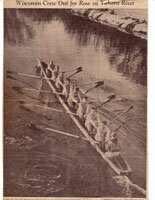 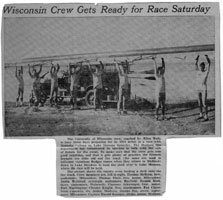