In the Fall of 1941, Roundy, in his Wisconsin State Journal column, described junior crewman George Rea announcing the a Pep Rally before the Wisconsin-Notre Dame football game. Rea is quoted as ‘sloganizing', “ Wisconsin 's first pep rally of the year and we want to make it the best.”

In the same undated (Fall of 1941) clipping, Coach George Rea's coaching effort is described, “With the national emergency making intercollegiate competition doubtful next season, Coach Allen Walz has broken his 1941-41 crew into four teams of five men each, who will vie against each other in a series this fall.

‘The varsity turnout is much improved over last year not only in number but also in personnel,' says Walz. The varsity boasts a veteran aggregation of eight men besides some twelve other experienced performers. Over 110 freshmen have signed up for frewshman crew.

The Daily Cardinal in the fall of 1941 carried the following story,

Coach Walz ordered a megaphone from Bill Aspinwall, graduate manager of athletics. After some time, the megaphone was delivered to Walz at the boathouse and the latter was surprised to see that two men were carrying it to him. His bewilderment was soon dispelled when the wrappings were taken off and it was discovered that the megaphone was made of corrugated iron. Now Walz is casting around for a new assistant to help carry it.

UW coxswain Robert “Cookie” Moore was spotlighted in the Capital Times (?) of early May. Moore was described as 125 pounds and 5'2” with a crew of eight rowers totaling 1,520 lbs. Stroke Carl Holtz says Moore just sits there and cracks jokes for the oarsmen. Moore, who coached at Madison West High School earlier this year, disagrees. The article goes on to describe how the rowers, finishing their showers before Moore had finished strapping the shell away for the night, had locked up all of Moore 's clothes and left him alone in the armory – except for a bar of soap. Moore eventually had to sneak around the corners until he found a phone and put in a call for help from his fraternity brothers.

Due to wartime difficulties in transportation, manpower losses, etc., the only race in which the varsity was entered was in the Adams Cup Regatta held in Boston . Competing on a mile and three-quarters course, with Harvard, Navy, Penn, and MIT, the Badgers finished second to Harvard over the mile and three quarters course, with Harvard finishing in 9:18.6, and Wisconsin 's time 9:25. “The untried inexperienced UW crew showed their worth by forcing Harvard to the limit to beat the Badgers, who were coming up fast at the finish.

This was the Wisconsin varsity's lone race this season, in a war-curtailed sport.

On May 16, the Adams Cup race in Cambridge was set. Coach Walz, because of the gasoline shortage on the east coast due to the war, had a big milk can filled with gasoline for the coaching launch. The crew manager and Roy Rom carried the smelly can of gas through the lobby of the hotel, telling the door man it was drinking water for the crew, as the coach did not want his men to get sick drinking the hotel water. The two were then directed to the kitchen of the hotel.

As reported in the New York Times , “The year's only intersectional rowing race moved over the mile-and-three-quarter course on the Charles River . It was apparent as soon as the crews settled from their racing starts that it was to be a real race. Tech (MIT) led for a while and then Navy, Harvard and Penn, but all five crews were tightly locked.

They all dropped to the lower thirties, except Penn, which stayed up to 35 and went into the lead in the first quarter mile. The Quakers had perhaps a deck on Navy, with Harvard and Wisconsin a deck further back and Tech on their flank.

At the three-quarter mark it was impossible to pick a leader from among Wisconsin , Pen and Navy, with the Crimson a few feet back and Tech about ¾ of a length further back in the rear. Then, as they moved under the crowd on the bridge just short of the mile mark, Harvard had begun to move and was a few feet in the lead, with the others just along side.

Here, in the rough water, Phil Childs, the Navy stroke, caught a crab, lost his oar handle and the crew missed two r three strokes, dropping back a length. Navy pulled itself together and rowed very well, but Harvard had taken command. The Crimson had a bit of open water and Darcy Curwen, who is one of the best strokes the Cantabs have ever had, moved his boatload along smoothly and well.

Navy came back to challenge Wisconsin while Tech moved up to pass the tiring Penn crew. In the last few hundred yards Wisconsin and Navy were prow to prow and they slammed over the finish at forty strokes, with only the judges on the finish boat able to pick them apart.

Harvard had gone up to 40 and finished very well, distinctly master of the river for this day. It is unfortunate that Navy had its accident, but the Crimson deserved full credit for their victory. For Wisconsin - denied a chance to race at Poughkeepsie - it finished the only race of the year, and a good one. Wisconsin , with an eight that averaged over 6'4” in height, was very impressive and might well have been a real four-mile crew if the Poughkeepsie regatta had not been called off.

Wisconsin did not participate in the JV-8 race, finishing Penn, Harvard, Tech and Navy, nor the freshman eight race, which finished Harvard, Tech, Penn and Navy.

Sophomore coxswain Roy Rom remembers traveling to race the Detroit Boat Club with the JV-8 shell over the same weekend as the Adams Cup.

George Rea, Milwaukee , has been awarded the George I. Gross Trophy for being the most inspirational junior or senior on the 1942 UW crew, according to a recent announcement by Coach Allan (sic) Walz. Rea, a junior, rowed at the No. 3 position for the Cardinal eight, which had its season curtailed by the cancellation of the Poughkeepsie regatta. However, in their one competitive appearance of the season the Badgers almost upset the experts by finishing second to a smoothly stroking Harvard crew in the Adams Cup race at Boston . Rea also represents the crew on the undergraduate athletic board, on which he holds a vice presidency. Stroke Carl Holtz of Milwaukee will captain the 1943 Wisconsin varsity.

George Gross, donor of the award, was a friend of Coach Walz, both having attended New York University as classmates. The trophy probably discontinued being awarded at Wisconsin after 1946, following Walz's departure for Yale that summer.

Gross, writing from his home at 90 John Street in New York City, later acknowledged Rea's thank you letter, saying, “If you will permit me one word of advice for your career it would be to retain at all costs that wholesome spirit of which you are now possessed. It is one of the finest assets you will have. It will pay many dividends in the form of friendships and even the material things of life.”

On May 12, Asa Bushnell, secretary of the IRA announced cancellation of the 1942 Poughkeepsie Regatta.

No IRA's were held 1942 through 1946 because of WW II. The regatta was canceled at Poughkeepsie for several reasons in 1942, including changed academic schedules beginning earlier in June, which complicates selecting a regatta schedule to match appropriate tidal conditions. A second reason given was the general desire by college athletic associations to economize. A third reason was the uncertainty of obtaining railroad observation cars, which have been dismantled and converted to the war effort. 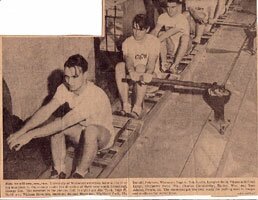 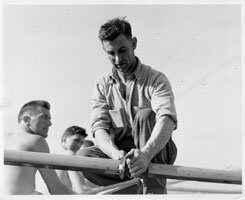