In the IRA's of 1948, Wisconsin varsity eight rowed the Drewes -made boat; it was the only shell in the race not made by George Pocock of Seattle .

During the Spring of 1949, the At Ease committee and the student board, at a regular Sunday afternoon party at Great Hall, hosted the UW crew and their coach, Norm Sonju. The purpose was to allow students a close look at and conversations with, the UW crew, which is usually seen from afar. An all-crew floor show of Jack Schlick, Bill Sachse, Gordon Grimstead, Cliff Rothcamp and Art Sandsnark executed a routine. Hosts and hostesses were Phi Gamma Delta, Chi Omega and Elizabeth Waters Hall.

Dick Tipple, captain, began his rowing career at Madison West, under former UW oarsman and assistant coach Roy Rom. Madison West, where crew was dropped several years ago (after 1942), turned out oarsmen for UW and Harvard in past years, including Paul Knaplund, who captained th Harvard varsity.

In a dual meet on a two-mile course on the Housatonic River off Derby , CT at 5:00 PM on May 7, Wisconsin faced Yale as part of that school's Derby Day weekend. Former UW coach Allan Walz was Yale's crew coach. “The spectator crowd reached an estimated 25,000. Wisconsin, off to in a 38 beat, quickly swept into a deck length lead, despite Yale's rapid 42. And at the half-mile, the Badgers , responding to stroke Earl Lapp's demands, increased it to half a length. But Yale upped its beat to even it a at the mile, and moved in front by two feet and then a deck length just beyond the halfway mark. Not daunted, Wisconsin rallied to go in front again until the final half mile when Yale, matching the Badgers' 34, took charge and held it the rest of the way.” UW (9:35.3) had lost to Yale (9:34.3) by a scant four feet; Yale set a course record by ten seconds in the process. UW's boatings: Don Haack (bow), Pete Wackman (No. 2), Dick Tipple, Bill Sachse, Otto Uher, Gordon Grimstad, Cliff Rathcamp, Earl Lapp (stroke) and Duane Daentl (cox). Daentl had replaced Donn Linton in a last minute decision by Coach Sonju.

The record-nearing varsity brush was a masterpiece. At no time during the struggle was either eight clearly in command, and at no juncture was either in front by more than a quarter boat length.

Yale's racing technique produced a mild surprise. Before the burly Badgers threw on the coal, the Blue was expected to fulfill its previous low-stroke pattern. Thought to run better some 31-33 strokes per minute, they worked the body of the race at a neat, flowing 34.

Dick Krementz, Yale whip in the number 8 slide, gauged his foe in the first quarter mile and realized a dropping beat would give too much ground. He was forced by Wisconsin 's beautiful power to work higher, and he and his boatload met the test superbly.

Wisconsin drove off their stake boat at a powerful 42, held the pitch at that point through the first 20 leg drives and then gradually dropped the count under Yale at 33. The Blue, meanwhile, met the Badger start through the driving, but fell behind a deck's margin when they tapered off to a racing pace.

Coach Norm Sonju's battering crew had almost a half length at the quarter, aided by the Elis ' swerve to avoid the floating pedestrians. (Trouble developed in the first quarter mile of the race when partying spectators along the Shelton shore, swimming and in boats, meandered into the course. Yale's sweepswingers had the closest squeak, narrowly missing a packed rowboat through the insouciance of coxswain George A. Carver.). With the Badgers under-stroking and holding the edge, Krementz was forced by circumstances to maintain a steady 34.

At the half mile flags, Krementz had narrowed Lapp's Wisconsin lead to 10 feet. Rowing 33, Yale dropped back a half lap after three quarters, but was riding gunwhale to gunwhale at the mile, or halfway, point.

From here in, it was a boat race - a leg driving, bitterly contested battle between two uncrackable combinations. Stroke by precious stroke, the eights fought, the lead sliding perilously in the balance.

Yale, which had nosed ahead fleetingly at the mile mark, drew even a quarter mile from home, poured on the juice for a six-foot lead and only gave away two of those important feet in the hectic, soul-searching bolt to the flags.”

The lead paragraph read, “In a bitter, no-quarter duel over the full two miles, Yale's heavyweight varsity crew yesterday afternoon met and mastered the merciless challenge of a giant boatload of Wisconsin oarsmen, powering home for a four-foot victory. A crowd of about 30,000 witnessed the program”

UW's varsity coxswain Duane Daentl, a sophomore, remembered several incidents around this race. The first was former UW crew coach Skip Walz was the Yale coach for this Yale crew. The second was his being strongly criticized during practice by Coach Sonju for stopping his shell before reaching the exact end of the course Sonju was timing. “My backside was (figuratively) red from that yelling at. From then on, I never stopped the boat until I'd gone well through (the finish line).” Another recollection of the race, on a winding course on the Housatonic River , was the Yale weekend of celebration going on. During the race, a couple of ‘happy' Yalies found themselves in a boat in the middle of Wisconsin 's lane. Because of the winding course to start with, Daentl was able to slide by them with little loss of time.

Duane Daentl was known to many in his crew as “Doc” because he worked in a pharmacy on the east side of Madison . His taking of daily insulin shots no doubt added to the origin of the moniker.

UW crew alum Paul O. Eckhardt, Jr., officiating at the event and one who took the finish photo above, remembers speaking before the race with Yale coach Allan Walz (former UW crew coach) and being asked, “Should I use my heavy crew or my lightweight crew?” Walz later answered his own question, “I think I'll use my heavy crew.” Yale won by four feet over the winding two mile Housatonic course with celebrating Yalies rowing through UW's lane.

The last incidence of this trip occurred after arriving on the train from New Haven in New York . Daentl had had to catch the train to New York before taking his regular insulin shot. When the urgent need for this was clear while in the middle of Grand Central station, Daentl's teammates formed a thick circle of fellows around him while he “dropped his drawers” and injected himself with insulin in the upper thigh.

At 4:30 A.M. on May 17, UW's 21 oarsmen arrived by plane and slept late. Heavy two-day drills were logged May 19 and 20, in anticipation for the May 21 races on the Oakland estuary off Berkeley , California . Cal Coach Ky Ebright turned the Cal boathouse over to the UW visitors and told them to pick their shells. The Wisconsin men borrowed shells from the host school to save shipment expense. The Badger jayvees selected the George Blair , the shell with which Cal , representing the U.S. , won the Olympics last year in London . UW's varsity chose the Eldorado , with which Cal 's JV-8 had beaten Washington 's JV-8 the week prior in Seattle . In the end, the fine outfittings did not matter. The 1948 Olympic champions from Cal (14:43.6) beat the UW (14:56.5) varsity by 3 ½ lengths.

Wisconsin 's planned frosh-JV event in Chicago against the Lincoln Boat Club of Chicago was canceled Friday, the day prior, when Lincoln B. C. advised of the accident to the boat to be lent to the Badgers; no other boat was available.

Facing Navy (9:40.4) in on May 28, the Badgers (9:32.4) - who built up a four length lead at the mile mark before Navy, with only 100 yards left, put on a surge and gained one length back - finally stroked its way to victory, winning by two lengths on a 2 mile course on Lake Mendota. It was their Badgers first victory of the season. Navy was coached by Buck Walsh. Duane Daentl replaced Don Linton as cox for the day's race.

The varsity race was broadcast over the University radio stations, WHA and WHA-FM, with Lou Landman as the announcer. In use for the first time on Mendota was a blinker light stationed just beyond the finish line which afforded the coxswain something to steer on.

June 17, Washington came to Lake Mendota . Sportswriter Henry J. McCormick, in the June 19, 1949 Wisconsin State Journal described the freshman and varsity races: “The Wisconsin yearlings were off in front and were practically even at the half-way point. It was along about here that the entire starboard side of the Wisconsin frosh boat caught a partial ‘crab,' and the boat lost all of a length of distance and considerable rhythm. Even at that, the Badger ( 9:59 ) yearlings hung in there tough and were only 10 seconds behind the Huskies ( 9:49 ) crossing the finish line. And this, remember, is rated as possibly one of the finest freshmen crews in Washington history.

The Wisconsin-Washington varsity race was a picture duel, one of the greatest ever seen on Lake Mendota . Down the course they flew like a couple of giant waterbugs; there wasn't more than 10 yards separating the gunwales of the two shells, and from any distance it appeared that the cardinal-tipped oars of Wisconsin and the white-tipped sweeps of Washington were grabbing water not more than a coupe of feet apart. There was not more than half a length separating the bobbing bows at any time; most of the time there was much less. Both crews settled into a beat of 32 strokes per minutes. Wisconsin using smoother technique inboard and outboard to get as much benefit from the same beat as the more powerful but less smooth Washington crew was achieving. So close together at the finish, that it took the official announcement to reveal the fact that Washington ( 9:35 ) had won by eight feet.” Wisconsin 's time was 9:37.2.

The JV crew lost to Navy, Cal and Washington this year, while the freshman won their only match against St. John's Military Academy. (sic; as described above, the freshmen also raced and lost against Washington on June 17, 1949.) 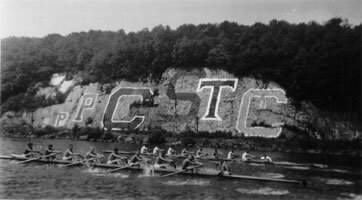 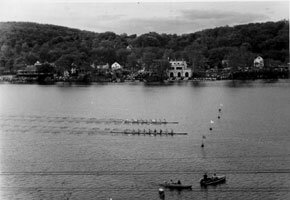 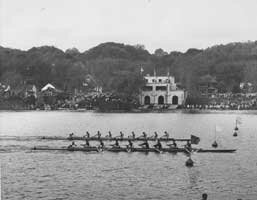 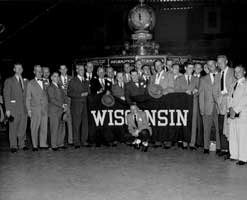 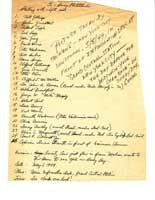 Last IRA practice on the Hudson 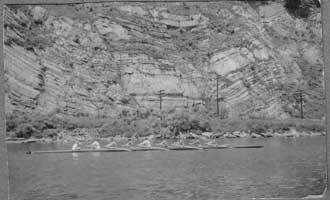 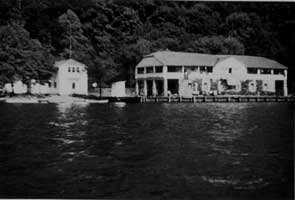 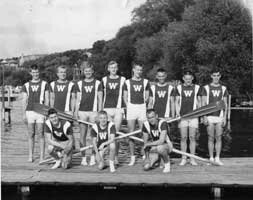 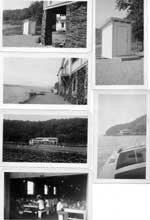 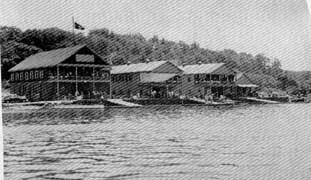 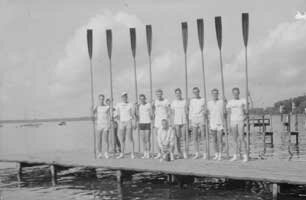 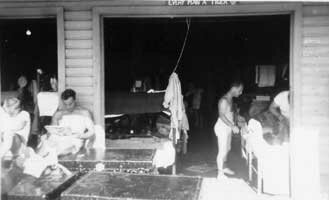 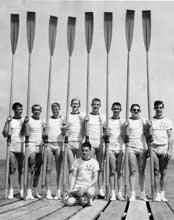 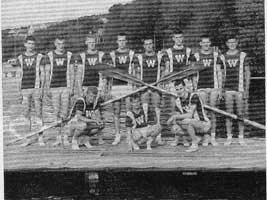 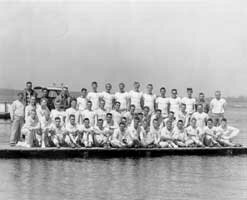