Don Rose, Wisconsin 's varsity coxswain in 1952, was a regular sports columnist in The Daily Cardinal and gave the Badger crew lots of media coverage.

The Badger eight didn't get on Lake Monona until March 25 and Lake Mendota until April 9.

April 9, the crews got on Lake Mendota for the first time this spring, after some practice the last month on the Yahara River and Lake Monona .

On the same day, UW's frosh defeated Purdue in Madison in the first crew race ever held between schools of the Big Ten Conference.

May 17 at Lake Carnegie in Princeton , NJ , at the Eastern Sprints, Navy (6:03.7) was the victor by a length and three-quarters with Wisconsin (6:09.0) second, Harvard 3 rd and Cornell 4 th ; all other eastern schools had been earlier eliminated in qualifying heats. “UW rower Del Barrett missed his first race in four years with a cold.” “UW's Bob Hood had had an appendix removed a month or so before, so the team was uncertain how the strain of the race would impact Hood,” according to UW cox Don Rose. “It apparently had little effect.” Rose also recalled in the preliminary qualifying heats, UW was pitted against Princeton . The race was apparently pretty close all the way. In the excitement following the race along the bank of the man-made race-course in his Jeep, Princeton Coach “Dutch” Schoch nearly drove into the river,” said Rose.

UW did not take a 2V8 or freshman boat.

On the same date in Chicago, IL, UW's 2V8 won the University Cup (an 8-oared boat race) in the Bishop Bernard J. Sheil Schoolboy Regatta on Lincoln Park's 1 mile course by defeating the St. Louis BC by 4 ½ lengths.

June 14, Cal, winner over Stanford in the Intercollegiate Sprint Championship Regatta on Balboa Bay , raced a 1 7/8-mile course on Lake Mendota (moved from Lake Monona to get smoother water) in Madison before the IRA's. “ Wisconsin 's varsity spurted into the lead at the very outset as coxswain Don Rose sent the Badgers boiling away in a racing start of 42 strokes to the minute. (Bob Nelson was at the stroke.) The Badgers pulled away steadily and they had a lead of a length at the half way point. California hung in gamely for a time by raising its stroke, but the Badgers began pulling away again with a powerful 31 beat, and California was a thoroughly whipped crew at the finish.” The UW varsity (9:03.5) prevailed in the upset by a two-length margin over Cal (9:12.3), their first dual victory over a California crew ever. The two crews had met six times previously. It was the first defeat of the year for Cal .

For the first time, the Jim Ten Eyck Memorial Trophy was placed in competition for the first time. Under the three-race combined results formula, the varsity winner is awarded 8 points (second is awarded 7 points, third awarded 6 points, and so on) and each of the JV and frosh eight winners get six points.

June 20 - The IRA's moved to a three-mile course on Onondaga Lake in Syracuse , NY , a site evoking Longfellow's famous poem of “Hiawatha.” European settlers appeared in the region about 1789 to take up land granted to former soldiers of the Revolution, but the village of Syracuse had a population of only 500 when it was incorporated in 1825. In its salt springs along the borders of Onondaga Lake , however, Syracuse possessed a natural advantage of great importance. It was the first place in the US where salt for commercial purposes was obtained other than from seawater. The salt industry declined in the 1890's, but its early development gave impetus to the continued growth of the city. Syracuse was once known as “ Salt City .”

In this 1952 regatta, all 28 shells – each 62 feet in length, 2 feet in the beam at the widest point and about 250 pounds apiece – were built by George Pocock of Seattle , Washington . George, father of Washington's freshman coach, George Pocock, maintains his workshop in the boathouse of the Washington Huskies.

In the jayvee event, it was Navy, Washington , Cal , Penn, Cornell and Princeton.

All races were put back by an hour with bad water and a high chilling wind. The regatta was watched by 35,000 people.

Rusty Callow, who'd recently moved from Penn to Navy, coached his three eights to a ‘sweep' of those events and won the first Ten Eyck Trophy, saying, with tears in his eyes, “It is a great pleasure to accept this Ten Eyck award. I think old Jim would appreciate my winning. Jim was an old friend of mine, a great teacher and once a Navy coach.”

Many of the IRA crews stayed in the east to participate in the July 3-5 Olympic trials in Worcester , MA . UW won its first heat against Washington and Buffalo West Side BC and then lost ( 7:01 ) in semi-finals on July 4, 1952 to Navy (6:57.8) and Cal (6:58.3). In another example of Coach Sonju's changes of personnel to try to bring a change of chemistry to the boat, he substituted last year's varsity cox, and now graduate student Duane Daentl, for his varsity cox, Don Rose. While Rose admitted the change did have the effect of providing a spark to the boat, he admitted to being disappointed to have missed participating in the Olympic trials. Sonju may have also replaced bowman Del Barret with Jim Healy, who rowed in the four at the recent IRA's, though news sources conflict on this subject. 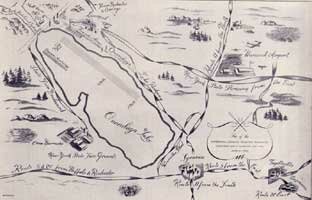 Article in Wisconsin Alumnus
May 1952 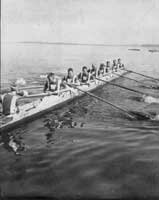 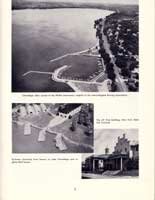 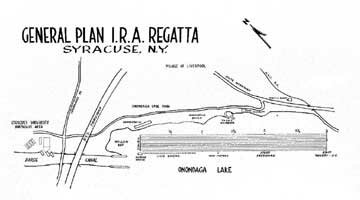 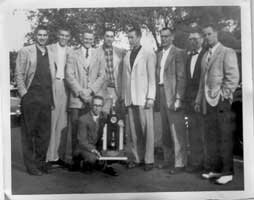 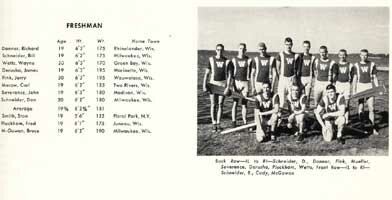 Varsity 8
Cover of Wisconsin Alumnus May 1952 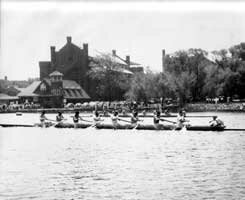 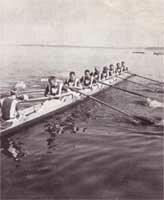