Between semesters at winter training in Florida , the Badgers defeated Florida Southern and Rollins College .

The March 20, 1953 Daily Cardinal (p. 6) reported the UW oarsmen were working out on Lake Monona . It also reported a contest among them to guess the date when the crew will first work on the “home” waters of Lake Mendota . The consensus is the ice will break before the first of April, which would be one the earliest dates in recent years. The lake did actually open March 20-21, but was also quite windy.

April 1 was “Crew Cut Day” for the crew, with free haircuts being offered at the Armory for any interested students.

Two new George Pocock shells costing $2,000 each were expected for delivery this afternoon. Weighing 300 pounds, each 5/32 of an inch coat of varnish weighs 2 pounds and nails account for 20 lbs. Pocock is the only commercial shell builder in the country. He uses 12 different wood types and the western cedar is th most important.

April 27, veteran port oarsman Bob Hood, married only two weeks earlier to the former Joan Holman, underwent an emergency appendectomy at the student clinic and is expected to be out for the season.

May 2, the crew took two eights to Wisconsin Dells to stage a rowing exhibition, with the winner racing the women of Rockford College of Illinois. In the first ever, male-female crew race in Wisconsin history, a head start will be given the Rockford crew. In the feature race, the two fours of women from Rockford were given a half mile head start in a one mile race; Both Rockford entries finished well ahead of the red-faced Badger eight. After the race a reporter wanted to know whether starter and Head Crew Coach Sonju had underestimated the girls or overestimated his varsity. (Wisely) Sonju wouldn't say. UW's apparent boating: Jim Healy (bow), Virgil Trummer, Bob Roehrs, Al Wheeler, Jim Moran, Harry Miller, Jim Lorenzen, Vic Steuck (stroke) and Don Rose (cox).

The week before the Eastern Sprints, UW hosted Syracuse on Lake Mendota and won by 1 ¾ lengths. The UW jayvees also beat Syracuse 's JV-8, this time by 2 ½ lengths.

May 9, Syracuse came to visit Madison for a competition on a 1 ¾ mile course on Lake Mendota . Weather conditions were near perfect. Spectators were expected to include Wisconsin Governor Walter J. Kohler, UW President E. B. Fred and Regent Oscar Rennebohm in the officials launch. The Badger varsity got off to a good start at 40 per minute and rowed in a range of 29 to 32. Syracuse rowed at a rate several strokes higher but could not match the more powerful UW crew. Wisco crossed the finish in 9:13 , with Syracuse behind at 9:25 . UW's JV-8 ( 9:31 ) also won by about a length over the Orangemen( 9:39 ).

May 16, the finals of the Eastern Sprints on the Potomac River in Washington were scheduled to be televised on WTMJ-TV at 2:30PM ; the announcer is expected to be Alan “Skip” Walz, former UW crew coach. In the finals, UW, “rowing at a frantic 40 beat clip” to nip Cornell, was third (6:12.7) behind defending national champion Navy (6:07.4) and Harvard. Following UW were Cornell, Syracuse and Cal (by 4 lengths). At home in Madison , the UW frosh defeated Culver Military Academy . UW's frosh boating: A. Hove (bow), J. Shaw, G. Seymour, J. Williams, B. Graves, E. Smith, P. Lucas, F. Smith (stroke), and R. Loffsfeldt (cox).

May 23 at Madison, Purdue's varsity and JV are scheduled for two events against UW. The race was canceled by wire by Purdue Thursday, May 21due to final exam conflicts.

Traveling west on Saturday, May 30, the Badger varsity met Cal over a three-mile course on the Oakland Estuary. The Cal Bears opened at 36 and after the first minute, had a five foot lead on the Badgers. With Cal trying to stay out front, the Badgers settled to a 29-30 beat and started to move up even though the Cal cox had their stroke count at 31. Some observers felt the Badgers short, fast leg drive spelled part of the difference as Cal had a much longer stroke, but didn't use their legs as well.

Wisconsin 's smaller but powerful crew, with Victor Steuck at stroke, opened a lead after a mile and stayed ahead. The Bears were in front by about a deck length at the first quarter of a mile, but at three-quarters of a mile the two shells were abreast.

In the end, UW ( 15:15 ) defeated Cal ( 15:30 ) by 4 lengths, while the Badger jayvee boat lost by three lengths. Cal averaged 8 pounds heavier and an inch taller than Wisconsin …Though the Bears had six seniors in the boat, the Badgers, perhaps for the first time ever, were favored over the Bears. In six races, Californnia's varsity has won four times and Wisconsin twice.

On Saturday, June 13, Stanford's crew, a club sport supported by gifts and rower contributions, came to Madison . They will be borrowing a boat in Madison , as their shell is enroute, being transported to the IRA's along with Cal 's inventory of shells. Rowing for Stanford in the No. 7 seat is George Toepfer, Jr., son of UW's crew captain in both 1920-21 and 1921-22. The father was known as “the big little man” who hauled so much water as bow oar for three years at UW. Dick Danner ('55), a 20-year old Rhinelander sophomore (6'3” and 176 lbs.) rowed in the bow seat for Wisconsin against Stanford.

The Badgers finished in the slow time of 9:40 , while the Indians crossed the line in 9:47 . It was the third dual-meet victory for the Badgers, who defeated California and Syracuse in previous races this season.

Monday, June 15, the UW crew was honored by the Madison Curling Club (where Coach Sonju is a member) at the Blackhawk Country Club, the day before they left for Syracuse . The banquet was co-educational and open to the pubic.

At the IRA's on June 20, UW's varsity finished fourth, after Navy, Cornell and Washington; the jayvees 3 rd (sic, actually 4 th , behind Washington, Navy and Cornell, per the IRA Official Program Summary) UW's freshmen were fifth after Washington , Cornell, Princeton and Navy. 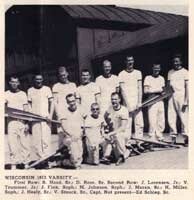 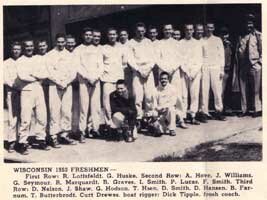