December 5, 1954, Allison Danzig reported in the New York Times that UW's Norm Sonju had been re-elected President of the Rowing Coaches Organization of America. The coaches also voted to move the Eastern Sprints from the Potomac River in Washington because of tide and current influences. Princeton 's Lake Carnegie was the leading contender for the alternative.

February 4 on a choppy Lake Maitland in Winter Haven , F lorida, Wisconsin ( 5:24 ) defeated Rollins College Tars by ¾ of a length over the 9/10ths-of-a-mile course.

Upon their return from winter break in Florida , the crew moved to new winter quarters on campus. Forsaking the antiquated Old Red Armory annex, which shortly will be torn down to make room for a new adult Education Building, crews will re-locate to the second floor of the boathouse, just over the life saving station boat slip.

For many years the space was used to store the basketball bleachers when the old Red Armory gym was used for intercollegiate cage contests. More recently the space has been used for general storage by the ROTC. Ten new rowing machines have been installed, bringing the total to 26, sufficient to work out the entire squad in two shifts. The new crew quarters, while not as “plush” as those in other rowing schools, are a great improvement over dusty, humid loft in the annex.

On the 1¾ mile Charles River course in Cambridge , Massachusetts on April 30, Wisconsin competed in the Compton Cup Regatta. The Cantabs (Harvard) uncorked a sprint in the last few hundred yards in an attempt to overtake Sonju's Badgers, but Wisconsin held its lead for a thrilling triumph. Wisco (8:55.3) won the Compton Cup regatta over Harvard (8:56.4) by a deck length, followed by Princeton (9:05.5) and MIT (9:10.5). Although Wisconsin was invited to regatta, it was not eligible for the trophy. UW's varsity boating: Richard Center (bow), James Williams, Robert Graves, Lou Uehling, Jery Fink, Carl Nerow, John Severance, William Schneider (stroke) and Stanley Smith (cox).

May 21 on a 3-mile Oakland Estuary course near Oakland , California , Wisconsin faced Cal in the 10 th annual renewal of competition. The Badgers, while under-stroking the Bears over the entire three-mile route, methodically widened its early advantage from a good start. At the halfway point, the visitors had open water and established a one-length lead. At the finish, Wisconsin ( 15:47 ) defeated California ( 15:59 ) by three lengths. The 10 dual meet record still favors Cal 6-4.

In Madison May 28 on a 1 mile course (originally 1 ¾ miles, but the race was postponed to 7:45PM and shortened by high winds and rain) with the race finished in the darkness, Wisconsin ( 4:55 ) lost to Pennsylvania (4:50.7) by 1 ½ lengths. The freshman ( 5:28 ) defeated Culver Military Academy by four lengths over a one mile Lake Mendota course. 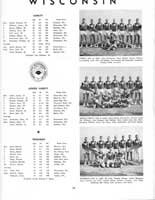 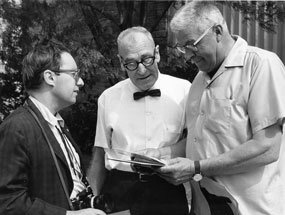