Boasting a clean sweep of four dual races and strong showings in two regattas and the Olympic final trials, the 1956 Wisconsin crew team met with considerable success. In the first action of the year, the Badgers downed Florida Southern by one and on-half lengths and Rollins College by a similar margin. These meets were held at Lake Maitland . Florida on January 31 and February 3.

May 12, Wisconsin was fourth in its heats at the Eastern Sprints in Washington D. C. and did not qualify; Cornell won in (6:10.0). The Badger JV-8 did not qualify either.

On May 25, Badger ( 9:02 ) crewmen again raced Navy, this time on Lake Mendota . The middies took an early lead, rowing at thirty strokes a minute, to move out by about a half-length. Midway in the race, the shells evened up and rowed bow to bow for about a quarter of a mile. Wisconsin then began to gain until the Badgers had a length lead. Navy increased its beat to reduce the margin at the finish. The Wisconsin sweepswingers rowed at 32 strokes most of the race. The Badgers won by three-quarters of a length on the 1 ¾ mile course, adding another victory to their record. UW's boating: Richard Smith (bow), Foster Smith, Robert Graves, Lou Uehling. John Morgen, John Shaw, Joseph Irwin, Dean Walker (stroke) and Eugene Huske (cox).

June 9, California came to Madison . The races were on a one and three-quarter mile course on Lake Mendota .

Rowing conditions were almost ideal. Temperatures were around 90 degrees. The Cal jayvees led from the first stroke and the Badgers never were in contention after the first quarter mile. Cal ( 9:02 ) defeated UW ( 9:27 ) by six lengths.

The varsity race was something else again. It was a crackling duel for almost a mile. The Badgers were ahead after the first few strokes and kept adding to their lead, but there still wasn't open water between the two eights at the mile mark. Cal was sticking pretty consistently between 33 and 34 while the Badgers were getting more speed out of a stroke that was between 32 and 33.

As the crews passed the mile mark, Wisconsin seemed to gain about a half length in a matter of a few strokes. California raised its beat, but Wisconsin still pulled away while rowing two strokes a minute slower. Wisconsin had the inside lane, and it unaccountably hit some rough water with about half a mile to go. A port oarsman caught a partial ‘crab,' but the Badgers showed poise and quickly settled back in the groove.

California went to a sprint beat trying to cut down the Badger's lead, but the powerful Wisconsin crew kept adding to its margin. Wisconsin put on a sprint for the last 100 yards or so and went across the finish line with two lengths of open water showing between its stern deck and the bow of the California shell.

Wisconsin 's sizzling time of 8:42 for the distance was twenty seconds faster than against Navy two weeks ago and the fastest ever.

It was Wisconsin 's fifth straight victory in the eleven consecutive years; Cal had won the first six contests. 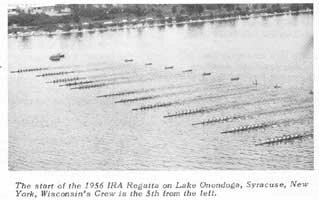 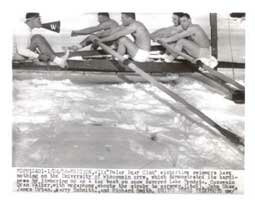 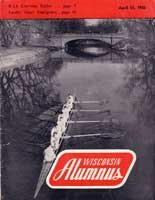