Wisconsin 's crew ran into rough water during its 1957 season. Because it raced against some of the best crews in the nation, it was able to come close on several tries but could only win once.

In early February, Wisconsin competed against Rollins College and Tampa University at Winter Park , Florida and Tampa , Florida , respectively. UW (5:03.9) lost to Rollins by one-quarter length. The Badgers recorded their only season victory by defeating Tampa (5:20.5) on a one-mile course on the Hillsborough River by two feet and finishing with a time of 5:20 .

In the March Wisconsin Rowing News , Coach Sonju, UW crew coach and former Husky oarsman, reported the University of Washington will be banned from the IRA's for two years for football recruiting abuses . “It seems a little like putting the whole family in jail for the sins of one of its members,” said Sonju.

As reported in the May 1957 Wisconsin Rowing News , promising sophomore Samuel Sentman was fatally injured in a freak ice boat accident on Lake Mendota on Saturday, March 6, 1957 . He was being towed on a flying saucer by one ice boat, when it appeared that the boat might crash with another ice boat approaching at an angle. Sentman released his grip on the tow rope and slid into the path of the oncoming ice boat. He succumbed to his many injuries after a week in Wisconsin General Hospital .

On May 11, Wisconsin (16:56) was able to finish second in a three team event on the three mile course on the Oakland Estuary off Oakland, California by defeating UCLA (18:06). Cal (16:46.7) was the winner by 2 ½ lengths. Cal broke into the lead rowing 33 strokes per minute, followed by Wisconsin at 36 and UCLA at 37. At the two mile mark California widened its lead to ½ lengths, then upped it to 3½ lengths at the 1½ miles before Wisconsin narrowed the gap to 2½ lengths. The New York Times of May 12, 1957 noted this was the 12 th contest over a twenty year period. The win gave California a 7-5 edge in the 20 year-old series with Wisconsin , ending a five-race Badger win streak over the Golden Bears.

Rower and future UW coach Randy Jablonic recalls staying at the Alameda Hotel. Upon arrival at the airport, the Badgers were met by famed UW footballer Patrick O'Dea and some other alums. O'Dea and others took the squad around Oakland and then to San Francisco 's Chinatown , where silk pajamas were purchased.

On the same day, the frosh were scheduled to race Purdue in Madison.

At Annapolis on June 1 on a 1 ¾ mile course on the Severn River , Navy ( 9:21 ) beat UW ( 9:28 ) by 2 lengths. At a mark three-quarter of a mile from the finish, both crews slowed down to give way to launches that got on the course. Referee Clifford Goes roared into his megaphone at the interlopers. UW's boating: Richard Trummer (bow), Larry Schmidt, Randy Jablonic, Herb Degner, John Morgen, Terry Rose, Joe Irwin, Dean Walker (stroke) and Gene Huske (cox).

The only home event of the season on June 15 saw Coach Sonju's oarsmen ( 8:47 ) edged out by Stanford ( 8:45 ) by one-half length on a smooth 1 ¾-mile Lake Mendota course. There never was open water between the two shells, and the outcome was in doubt right down to the finish. UW's boating: Brian Bagley (bow), Robert Schmidt, Randall Jablonic, Terry Rose, John Morgen, Dean Walker, Joe Irwin, Herb Degner (stroke) and Eugene Huske (cox).

After the race, the first Alumni Day was held, attended by twenty former oarsmen.

Rose also gained fame at UW as a gymnist.

Origins of the Four-Oared Race Without Coxswain

In the March 1957 Wisconsin Rowing News , Coach Sonju told of the origins of the four-oared race without coxswains. It seems the late W. B. Wordgate, when competing in this event in the Brasenose Four in 1868 arranged that on the word “Go!” from the starter, the coxswain should jump overboard. Lightened by the ejection of this passenger and, aided by a Wordgate-designed foot-based steering mechanism, the Brasenose Four went on to win only to be disqualified. The next year presentation prizes were offered for four-oared race without coxswain and thus this four-oared race came into being. 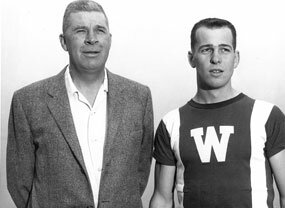