In March, the crew carted the huge shells down to the Yahara River and began rowing on a half-mile stretch which is free of ice. “It could be a pretty good year,” Sonju said, half to himself.

While practicing in the cold weather of April 10, with ice still on Lake Mendota , No. 3 seat Randy Jablonic (future coach of the Badgers) had his sweatshirt wrapped around the handle of his oar. The oar, the sweatshirt and his own clothing intertwined and caused Jablonic to be flipped into the frigid waters of the lake. Coach Sonju saw the incident, took over driving of the launch and swerved rapidly straight back to the struggling athlete. Jablonic remembers trying to swim back to the shell and found the water so frigid, he was quickly too numb to effectively stroke at all in the water. The launch came to a heaving stop close alongside the stiffening Jablonic - so close at one point Jabo thought the launch might strike him - whereupon Sonju wrenched him into the motor boat and wrapped him in blankets.

On May 2 on the Oakland Estuary in Berkeley , California , Wisconsin and Cal rowed to an unprecedented tie over the two-mile course. Both were timed at 9:53.3. Cal had originally been awarded the victory by the finish line judges – Fred Henschel of the Cal reserves and Dale Sharpee from UW's 2V8. Up charged Wisconsin 's Sonju, however, protesting his Badgers had actually caught California at the finish line. Sonju pointed out that the judges, standing together, actually had not been at the line but six feet ahead of it. Then oarsman Randy Jablonic remembers the team's being picked up at the airport and shown around San Francisco by UW football legend Pat O'Dea.

In the annual “pickle boat” race on Onondaga Lake, the five-boat, one-mile race was won by the Husky-Badger-Princeton combo (5:21) won by a quarter length over the Cornell-Navy-MIT blend (5:22). The traditional award, a jar of pickles, was given the winners.

The University of Wisconsin was a surprise winner of the varsity championship in the regatta of the Intercollegiate Rowing Association today.

Taking the lead from favored Syracuse at the midway point in the three-mile race on Onondaga Lake, Norman Sonju's Badgers went away to win by two boat lengths in 18 minutes 1.7 seconds. The eight that was shut out of the Eastern sprint championship in May not only outrowed the Orange , but also crossed the line seven lengths ahead of th University of Washington , co-favorite with Syracuse .

It was a tight duel between the Badgers and the Orange with the former rowing a stroke under that of Syracuse . Syracuse stayed within a quarter length of Wisconsin to the two-mile mark. Then the Badgers went a length ahead again.

Loren Scohel's Orange varsity took the stroke to thirty-two and edged closer. But there was too much power in the beautifully pacing Badger boat. A half-mile from home Wisconsin had a length margin again. Then a marvelous sprint by the Badgers killed off Syracuse 's last hope. They went up to the killing pace of thirty-nine *, increasing their lead to two lengths and then finished at thirty-three.

Meanwhile, Navy had fought off Cornell and Washington and moved up on Syracuse . Rowing at thirty-four in passing the first two boats, the middies went to 38 ½ in the try to move on the Orange . It was a terrific fight between the two crews for second place right down to the last stroke, the Orange just getting in first by 1.1 seconds.

Sonju, who last piloted Wisconsin to victory in 1951 on the floodwaters of the Ohio at Marietta , had said before the race here that he did not see how Syracuse or any other varsity could beat the Huskies. But California 's extra effort for its retiring coach was too much for Washington , as it was for Cornell. The surprising Wisconsin victory was gained on flat water but against a fifteen mile head wind that made for a slow time.

(*Future UW coach Jablonic, rowing in the 3-seat of the varsity boat, remembers a different pace. Starting out in rough water, UW was dead last in the early segment of the race, ‘settling' (the pace set after the surge of the start) at a rate of 26 strokes per minute. As the race progressed, Wisconsin made a terrible effort to come from behind and along the way found its water getting smoother and smoother and their stroke rate never went above 32. )

Another account of the race comes from Mark of the Oarsmen , the history of Syracuse rowing by Malcolm R. Alama (p. 316). He first describes why Cal , Navy, Washington and Syracuse all wanted victory so badly. Cal wanted to win for its Crew Coach Ky Ebright of 35 years and who was retiring after rescuing the Golden Bears from rowing extinction. Navy wanted the victory to honor their famous coach, Rusty Callow, who was ill and retiring. Washington was emotionally high after release from a two year IRA suspension imposed by the NCAA and their coach, too, Al Ulbrickson was also retiring. Lastly, Syracuse wanted victory as the host and favored crew, having only lost to Harvard at the Eastern Sprints by two feet.

...The varsity race, as predicted, was one of high drama and fury. Off to a bunched start, the crews frantically fought for positions. First Cornell grabbed the lead. Soon Syracuse snatched it from her. Meanwhile Wisconsin replaced the fading Cornell boat in second place. Advancing from fifth, then to fourth, Washington came up strong and drew abreast of both the Big Red (Cornell) and Navy at the mile.

While this trio fought for third, the Badgers, with their strong sweeps, passed the Schoel men ( Syracuse ). And at the two-mile point, Syracuse was a quarter of a length behind. A few minutes later the smooth-rowing Badgers swept out to a full length.

Unmindful of those valid reasons why California , Navy, Washington and Syracuse all desired victory, Wisconsin administered the coup de grace to the threatening Orangemen by increasing its stroke to 40. The Badgers smelled victory, and later they won it by sweeping across the line, stroking a lowered 33 strokes per minute.

While Wisconsin poured it on, things were happening other places on th course. Navy, after fighting off Cornell and Washington, began to move up on Syracuse . And for the second time in the championship race, the Syracuse men were forced to row a killing pace in order to salvage second place. Right down to the final stroke the two battled, but the Orange took second by one and one-tenth second.

The Jim Ten Eyck Trophy was won by Washington, followed by Cornell (the Ten Eyck winner for the last five years), Syracuse and Cal were tied for third and Penn and Navy tied for fifth.

Yet another account of the race was penned by George L. Sheller in the Official IRA Program of 1960 (proving the point that winners attract a lot of ink):

In the varsity race, the crews were closely bunched for the first minute off the mark. Cornell was the first to edge in front. Almost immediately, Syracuse , which had lost only to Harvard's marvelous eight, went past the Ithacans and a cheer went up from the many Orange followers in the crowd.

Syracuse stayed in front to the halfway point. Wisconsin challenge Cornell for second place, then passed the Red (Cornell). Cornell then found itself challenged for the third place by Navy. Washington , in fourth, then fifth position, began to contest with Cornell and Navy for third. This was at a mile and a half and it was there that the Badgers from Lake Mendota took the lead from Syracuse .

It was a tight duel between the Badgers and the Orange , with the former rowing a stroke under that of Syracuse . Syracuse stayed within a quarter length of Wisconsin to the two-mile mark. Then the Badgers went a length ahead.

Loren Schoel's Orange varsity took the stroke to thirty-two and edged closer. But there was too much power in the beautifully pacing Badger boat. A half-mile from home Wisconsin had a length margin again. They went up to the killing pace of thirty-nine, increasing their lead to two length and than finished at thirty-three.

Meanwhile, Navy had fought off Cornell and Washington and moved up on Syracuse . Rowing at thirty-four in passing the first two the middies went to 38 ½ in their drive on the Orange It was a terrific fight between the two crews for second place right down to the last stroke, the range just getting in first by 1.1 seconds.

Darkhorse Wisconsin , making a beautiful race of it all the way after taking the lead in the last mile of the three-mile varsity test, won the 57 th Regatta of the IRA. Wisconsin, a crew that had been shut out of the Eastern print finals at Princeton in mid-May, not only outrowed Syracuse, the pre-regatta favorite, but the Badgers crossed the line seven lengths ahead of the huskies of the University of Washington. 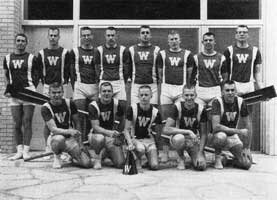 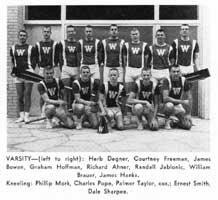 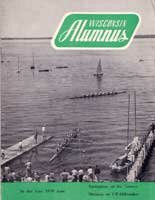 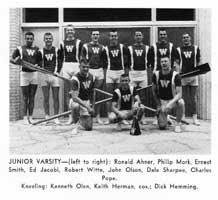 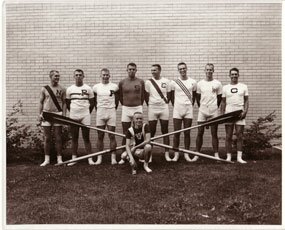