The University boat house built in 1893 has housed Wisconsin crews for almost 70 years. With our present squad of 80 oarsmen, it is very inadequate and adversely affects the caliber of crews we are able to turn out.

It was hoped when the university built the new gymnasium that an indoor rowing tank would be provided for the crew. The original plans for Unit One of the gymnasium included a rowing tank; later this was eliminated because of lack of funds with the understanding that when Unit Two of the gymnasium was built that it would include the tank.

Plans are now being drawn for the second unit which is expected to be built in 1965 and again the rowing tank has been eliminated for lack of funds. With the building of the new track, unit one of the gymnasium, financed by the athletic department and enlargement of the stadium, athletic department funds are committed for several years to come so no help is expected from that source in the foreseeable future. So, unless a miracle happens, Wisconsin crews will be rowing from the old boathouse until it falls down.

A new boathouse site has been allotted at Willow Bay by the university and the Wisconsin Crew Corporation has $15,000 toward a new boathouse. This is pretty much the picture and should answer the question so often asked, “When are you going to get a new boathouse?”

Two crews planned to travel to Winter Park , FL during semester break the latter part of January to race Rollins College and possibly Jacksonville . This will be the first time two crews will be taken to Rollins and the first trip in six years. The varsity (6:04.1) narrowly defeated Rollins (6:04.8) on the mile and one eighth course on Lake Maitland in Winter Park , FL. UW's JV eight (6:42.2) were six seconds better than their counterparts. Dr. Bradley, the Rollins College crew coach, was also one of the organizers of the Dad Vail Regatta in Philadelphia .

An April 29 article by Tom Hawley headlined “UW Crew Hopes to Contend” in the Wisconsin State Journal captures some of the fleeting thoughts of a UW crew coach: "When the University of Wisconsin crew coach Randy Jablonic talks about the 15,000 people who watch crew races at the University of Washington and about the big newspaper spreads that team gets, he turns a light shade of green."

The color deepens when he thinks about three guys sitting at the end of the football bench, guys whose scholarship costs match his travel budget.

In the spring, a new shell was delivered and will be named the Carl A.. Reed, in honor of the long-time crew supporter who rowed for UW in 1904 and 1905.

The famous Ratzeburg crews of Germany dominated international rowing ten years ago and their style still has an influence on today's Wisconsin oarsmen. Jabo acquired some of his philosophy from Ratzeburg crews of Karl Adams, probably the father of modern-day rowing. His innovations have today become popular.

Hard basic training and physiological development are ingredients necessary to win crew championships, according to Jablonic. 'This is what you find in international racing,' Jabo stresses. 'Crews go off the line and they continue to drive. In other words, these kids have learned to work and keep power on all the way. They don't try to get into the race and sit back and coast. They go into it and pull all the way.'

In 1964 (sic, 1963), they brought a Ratzeburg crew to this country and raced in the Eastern Sprints. We virtually tied them (in the heats?) in a kind of a fluke of a race under heavy wind conditions. A number of things went wrong. This man (Adam) came in and changed rowing immensely. He wasn't even a coach or an oarsman. I believe he was a mathematics professor. He had an eye on rhythm and motion and some good ideas.

Well, Adam is a physicist and was able to determine the proper ratios, lengths of leverage for moving the boat, actually the style of the boat. He made a very profound study, recounted coach Jablonic. 'I have a book he has written…I refer to from time to time because of his innovations and his philosophy about how to row a boat are very sound.'

On May 30 on a 1 ¼ mile Lake Mendota course, the UW JV-8 lost by 1 ¾ lengths to the Detroit Boat Club (6:03); in a virtual deadheat, the UW freshman tied with the jayvee shell in second (both UW boats were timed at 6:10). After trailing much of the time over the first mile, the Detroit shell, stroked by Charles Kemp, a Wisconsin oarsman last year, suddenly lurched ahead and pulled away easily over the last quarter mile. The water was choppy at the start in University Bay , off Elizabeth Waters dormitory, and it got rougher with a cross wind and boat wash over the last half-mile. Coach Sonju said after the race that Wisconsin 's boats rowed at too high a beat for the water conditions. UW's JV boating: Jon Greenfield (stroke), Tom Haworth, Lloyd Smith, Dave McClyman, Mike Wilhelm, Ben Porter, Don Erbach, Jon Stoddard (bow) and George Emerson (cox). 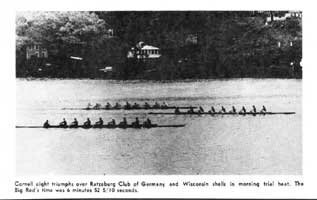