On October 16, UW's crew raced St. Thomas and the University of Minnesota (Gopher Crew Club) on the Mississippi River at Minneapolis . UW won the races and carried away handsome individual trophies.

About the same time in October of 1965, the first Head of the Charles races were held in Cambridge ; the winner was the Potomac Boat Club. UW did not attend.

At Winter Park , FL between semesters, UW's varsity and JV eights defeated Rollins College 's similar entries by a margin of a length in each race.

Around February, the Campus Planning Commission, the Board of Regents and the State Building Commission approved a new boat house site at th end of Babcock Drive.

The UW frosh boating: Don Schaefer (bow), Alan Whitney, Ken Kautzer, Daryl Hansen, Doug Shas, Greg Iverson, Phil Schaefer, James Barager (stroke) and Larry Taylor (cox). As the frosh rode back from their race, they shouted to the 3rd varsity “Beat that!” And they did.

With a new rowing style, the Badgers polished off Purdue, Wayne State , and Kansas State , but then placed 9th with a time of 6:33.0 in the Eastern Sprints on May 14. The oarsmen went back to the standard stroking style and immediately began to move. They lost by only a length and a half to a perennially strong Navy team.

June 11 on a one and three-quarter-mile course on Lake Mendota , Navy (9:10.2) held off a closing Wisconsin (9:13.7) sprint to score a three-quarter length victory.

By June 18, the date of the IRA regatta in Syracuse (a 3 mile course ), the Badgers hit their peak. Feeling the exhaustion of a quick start and an early lead, the Badgers were just able to win the biggest national race by a deck length over Navy (16:05.7). The Wisconsin varsity eight's third title at the IRA's was in a time of 16.03.5 (3 miles).” The Badgers, at 4:15 PM , rowed in lane 10 (numbered from the Liverpool shore) against 14 other crews.

The front page of the July 1966 “W Club News” pictured the Varsity Challenge Cup, Coach Sonju, several team members and the shirts of the other 14 crews that finished behind the Badgers. The article below the photo on the pier went on “The crew victory gave Wisconsin its only title - Big Ten or national - of the 1965-66 school year which saw Wisconsin's athletic program place fourth in the Big Ten's unofficial all-around sports championship race. It marked the fifth straight year that Wisconsin 's overall athletic program has placed in the conference's first division at the conclusion of the school year.”

Wisconsin , Pennsylvania and Dartmouth rowed to unaccustomed glory in the 64th regatta of the IRA on Onondaga Lake . Norman Sonju's Wisconsin Badgers won the varsity race for the first time since 1959, defeating Navy's defending champions by half a boat length and rowing the three miles in almost dead calm water against a five-mile head wind in 16:03.4.

Wisconsin 's victory in the varsity championship, its third in history, was as confounding as Navy's here a year ago. The Badgers had failed to qualify for the Eastern sprint finals in May and had been beaten a week ago by Navy at Madison , WI by a boat length. Sonju had picked Navy to win here, despite the fact that the victory at Madison was the middies only on of the season. It followed that the Wisconsin coach must have thought highly of his own crew in giving Navy a close race, but he expressed no opinion about it, limiting himself to extolling the strength of the Badger freshman.

There was no indication of the surprise that Wisconsin was to furnish until after the first mile had been rowed. Rutgers , Dartmouth and California had gone out in front at the start and waged a close fight for three-quarters of a mile. Brown now came into the picture and went by Dartmouth and California and challenged Rutgers , which had definitely taken over the lead at the low stroke of 29. Then, past the mile mark, Wisconsin, which had been in fifth place, put on a drive and took second place.

From now until the last half-mile of the race, Brown and Wisconsin waged a tough fight in which the lead fluctuated. Wisconsin definitely was in the front a mile from home, rowing at 32, a shade under the Bruins. It seemed Brown was still in the fight as they entered the last half-mile. But now Navy, which had been well back for the first half of the race and moved ahead of Cornell into third place at a mile and three-quarters, came on. At the same time, Princeton and Penn, which were far on the outside with Navy, made their move, too, from well back.

With 15,000 spectators on the shore in a high state of excitement as the crews neared the finish line. Navy and Wisconsin slugged it out in the high 30's. The middies went all the way to 41, but Wisconsin , at 38 ½, just managed to win in the last 10 strokes by half a length. Princeton , with a superlative effort, snatched third place from Brown by a second. Joe Burk's Pennsylvanians, with their electronic device, the Wizard, in the boat, followed Brown by three-quarters of a length and Cornell was next, less than half a length behind Penn.

Wisconsin , in addition to winning the big race, placed third in freshman and seventh in the junior varsity race and was runner-up to Pennsylvania (first time winner with 15) for (Ten Eyck) point honors with 12.

In Sports Illustrated , Paul Stewart, under the headline "Putting on the Old Indian Sign," wrote an article interviewing rower Bill Clapp about his Mohawk hairstyle and the results of the IRAs. This article is copyrighted, contact the webmaster for access. 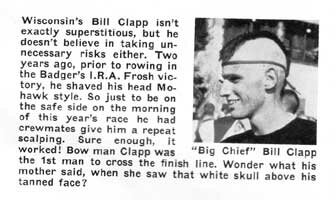 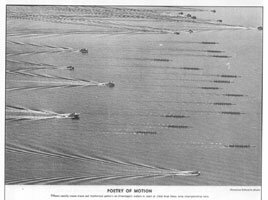