Wisconsin is at long last constructing a new crew house. Ground was broken in October and is expected to be completed in May. There will be two boat bays, a shop, rowing tank, shower and locker facilities.

Many oarsmen regreted the loss of the swimming pool at the old Red Gym, an inevitable result of moving to the new boathouse. A swim after practice was seen as a ‘perc' enjoyed for a long time by the crew. Somehow the coaches' glee at having an indoor rowing tank was not perceived by the athletes as an even trade for the loss of their pool.

On October 30, 1966, Wisconsin, attending for the first time, won the second annual Head of the Charles Regatta in Cambridge, Massachusetts with a time of 16:36.3 on the just under 3 mile course. The trip was made possible by the generous financial assistance of Carl Reed (a UW rower in the Class of 1905). UW's winning time was 12 seconds faster than second place Northeastern. Over 400 oarsmen, 117 crews and 37 colleges, clubs and prep schools competed. UW's boating: Arnold Polk (cox), Tom Sy (stroke), Doug Sahs, Don Lange, Greg Farnham, Neil Halleen, John Norsetter, Al Horner and Bill Clapp (bow). Harvard had a cox who weighed 56 pounds. “Coach Sonju had always been recognized as one of the great distance coaches in rowing. It's a shame it took until 1966 for Wisconsin to participate in the classic Head of the Charles race.”

The 1967 freshmen had their first ever race against the University of Minnesota on the Mississippi River in late October. The race was held with a 15 mph wind, with snow and temperatures in the high 30's. The freshmen won the race handily, but, more importantly, survived the experience.

Crew coach Norm Sonju was awarded one of four sportsman of the month awards from the Madison Pen & Mike Club in October.

The January UW Crew Newsletter (Vol. 11, No. 1) asked whoever borrowed the film of the 1959 varsity eight victory at the IRA's to please return the film.

The first annual crew banquet was set for March 11 at Welch's Embers on East Washington . The oldest attendee was Dr. Verl A. Ruth ('03) of Des Moines, IA. Freshman coach Randy Jablonic showed his usual enthusiasm for herding his boys off to this ‘first-ever' event. He told his boys they'd always remember this day, which was, as usual, correct. The red interior of the restaurant remains a vivid memory for the '67 frosh team.”

April 22, UW's third varsity was scheduled to row against Purdue in Madison .

On April 24, coach Sonju wrote a thank you letter to contributors to Wisconsin 's first trip to Henley planned for June 20 to July 1. Sonju wrote, “This will be the first Wisconsin athletic team to represent the University of Wisconsin abroad, since the 1909 baseball team toured Japan . Alumni support for the trip came from a wide range of classes – from 1900 to 1966 – and from such far off places as Vietnam , South America and England .” The crew planed to stay at the Baskerville Arms, Shiplake, Henley-on-Thames in Oxon , England .

On May 6 on a 2,00-meter course on Lake Mendota , the Badgers hosted MIT and Dartmouth . “ Wisconsin broke first in what Badger crewmen described as a rough start and held a lead of a couple of seats for the first third of the way. At this point, MIT took a slight lead which narrowed gradually with every Badger pull on the oars. The Indians were out of the race early. Wisconsin led by half a length two-thirds of the way through, stretched it to a length over the tiring Engineers with 500 yards to go and glided home easily with the applause of the fans who crowded the University boathouse and union area.” UW (6:40.3) won over MIT (6:49.2), second, and Dartmouth (7:03.6)

May 13: At the Eastern Sprints on a 2,000-meter course on Lake Quinsigamond in Worcester , MA , the UW varsity was second by a deck (8 th overall) in the petite final, behind Princeton (6:13.8). Harvard (6:06.2), in the 27 th consecutive victory on its schedule, won the grand final. The JV-8, in a borrowed shell, was in the lead when their rudder fell off; when the UW entry grazed Boston University , the Badgers were disqualified.

On June 7, 1967 , Coach Sonju was awarded the Sportsman of the Year at the Madison Hall of Fame (Pen and Mike Club); the event was co-sponsored by the Bowman Sports Foundation. Joe Steinauer, swimming coach and former boat house manager/crew trainer, will also be inducted.

On June 10, UW (9:34.5) - in a heavy wind, a fighting tide and generally rough water - beat Washington (9:38.7) by a half-length and Navy (9:44.5) at Annapolis on June 10 on a 1¾ mile course on the Severn River . The Buck Walsh Cup, donated by UW rower Fred Emerson, in honor of former Navy coach Buck Walsh, was first awarded at this race, with Wisconsin going home with the honor.

One source described the UW's placing second to “the best Penn crew in generations” in the IRA's in Syracuse , which was delayed by one hour by a storm which caught the crews on the water t the exposed end of the lake. Two boats swamped and the rest took so much water they had to go ashore and dump their boats.

Varsity Scores First IRA Triumph Since 1900 - Wisconsin is Second. With distant thunder adding its voice to the applause of many in the crowd of 15,000 that lined the eastern bank of Onondaga Lake, Pennsylvania 's varsity crew caught up with a victory today that had eluded the Quakers since the start of the century (1899 and 1900).

At the start of the varsity event, Penn's heavyweights were in the thick of the struggle in the early phases, although content to allow others to set the early pace. At the one-mile point,, however, Wisconsin began power-stroking and passed Navy quickly. It was Penn and - mostly - the Badgers in a duel for the rest of the pull.

At the two-mile buoy, Penn stroking at 33, held a three-quarters-of-a-length lead over Wisconsin . It was apparent that the midwesterners would have to come up with lots of power to overtake the Quakers' smooth-working shell. But Wisconsin , last year's varsity winner, was unable to close in on the leader. Indeed, as fleet neared the finish, Penn stepped up its stroke to 36 and began opening water on the Badgers. The 1966 winner also increased its tempo, but its stroking lacked the Quakers' finesse and smoothness.

Penn's heavyweights, working their sweeps in superb style, defeated Wisconsin by about two lengths to win their first IRA crown since 1900. Cornell, which finished third, trailed in the Badgers' wake by 1 ¾ lengths. Then came Princeton, Navy and Brown in that order.

The victory, which was so long in coming was a notable one. Never before had so many crews - 16 - turned out for the varsity event. Adding luster to the memorable day for the Quakers was the award of the James A. Ten Eyck Trophy for the second straight year - for the best all-around three-race showing (Penn won with 19 points and Wisconsin was second with 13).

In the IRA freshman eight, a 2 mile course - Penn (10:37.4), Rutgers, Washington, Princeton, Wisconsin (10:52.2), Navy, Syracuse, Cornell, MIT, Northeastern, and Columbia. “UW's frosh had a horrible start and lagged behind the field for the first half of the race. But by the halfway mark, they began a move that saw them pass six boats and finish a credible 5 th . The cox's excited exclamation with 500 meters left of, ‘We're passing boats all over the place!' still rings in the ears of the oarsmen in the boat that day.”

Coach Jablonic remembered head coach Norm Sonju, who was often troubled with sciatica and may have been so during this trip, instructing Jabo to “take over the coaching here, as you understand this short course strategy better then I (the IRA's were still a 3 mile course in 1967).” With no formal announcement by coach Sonju to the crew themselves of Jabo's new interim responsibilities, Jablonic suddenly, and somewhat awkwardly, began coaching the varsity eight for the duration of the stay in Henley .

Leo Frederick Burt, a 5'11,'' a freshman 175-185 pound rower from Havertown (Darby), Pennsylvania joined the crew in 1967. He was later charged as an accomplice in the bombing of Sterling Hall in 1969 where one person was killed and several injured. As of July 6, 1971 , Burt was one of the FBI's ten most wanted fugitives, “being sought in connection with the destruction by explosives of the United States Army Mathematics Research Center .”

The Vietnam war made a lot of people crazy during this period in our history. Leo was liked by his teammates, had been a school-boy oarsman in Philadelphia and had a great family. This was a tragedy for everyone involved, including Leo. His teammates know that the Leo they knew was not the Leo who committed this crime. The war changed him tragically. 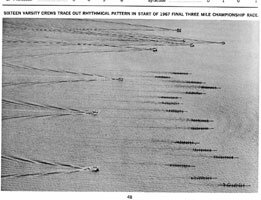 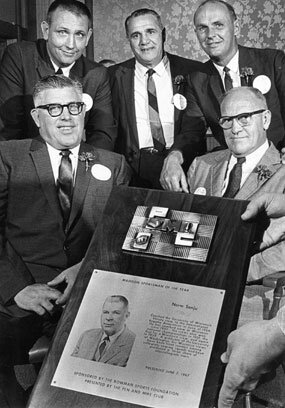