It was soon after being named UW Athletic Director in 1969 that Elroy Hirsch started looking for team expenses to trim. Deep cuts were sought and the men's crew team was identified. When the cutting of crew was made public, the outcry of protest by crew alumni and supporters was immediate. Apparently the Athletic Director had not realized or anticipated the depth of loyalty and tradition evoked by the long crew tradition at the University. The sport began on the UW campus in 1874 and thus was the oldest sport at the school.

Soon after being named head crew coach himself, following the 1968 season, Coach Jablonic remembers being taken to lunch by Athletic Director Elroy Hirsch in Maple Bluff, which he sensed immediately was to be not to be just a social occasion. Over some mutual libation, the AD advised he could not afford running crew. What if the athletic department offered to keep Coach Jablonic on ‘indefinitely' and Jablonic could run the crew if he raised the money to cover the expenses of the program each year. Having received no answer on the ride home, Hirsch asked, “What do you think?” Coach Jablonic said, “I can't do it. I'll stay with the team as is and if the team goes down, I'll go down with it.” Avoiding this small step into the no man's land of a later expendable club sport, the crew tradition continued.

Despite the cost pressures, the two men respected one another. AD Hirsch, however, never lost an opportunity to keep Coach Jablonic a little off guard. On one occasion on the golf course, they both faced a 50 foot putt. “Tell you what,” said AD Hirsch, “you make this putt, I'll buy you a new boat. I make the putt, we'll drop the crew program?” Coach Jablonic wisely observed, “Elroy, you play a lot more golf than I do. I think I'll pass on that offer.”

Another example of the banter between the two took place in the late 1970's when Coach Jablonic noted to the AD, “There's a little cushion left in our crew budget, and I haven't had a raise in a long time. What about giving me that cushion in a raise?” AD Hirsch responded, “I suppose so. I don't know how long the crew program will be around anyway.”

March 5, 1971, Richard Mueller (UW '47), President of the Wisconsin Crew Corporation, informed members that UW Athletic Director Elroy Hirsh sought to drop crew from the intercollegiate athletic program of the university. Because of poor attendance at the university's mediocre football team's games, revenues of the athletic department were so low as to squeeze many facets of UW's athletic program. Reasons given by Prof. Arno T. Lenz, chairman of the athletic board, were the high cost of travel and equipment and the fact that the crew is not a Big Ten sport.

A news account on March 6, 1971 told of the crew's budget being $3,000 in the red, but still planning six meets, only one of which is at home. AD Hirsch presented and received tentative approval of the Athletic Board for the schedule. The article went on the say the UW Fieldhouse (the Coliseum was the competing alternative) was still in the running for five Milwaukee Bucks playoff games, which would result in $9,000 per game plus a share of the gate and concession incomes.

On March 11, Wisconsin Crew Corporation President Richard (Dick ) E. Mueller sent an all-members letter advising that Athletic Director Elroy Hirsch had recommended that crew be discontinued. Names of people to contact were part of the message of his letter.

On April 3, a Wisconsin State Journal article described a meeting the previous Friday was called to order at 2:14 PM by Athletic Board President Arno Lenz. An estimated 65 people, from the Athletic Board, the “W” Club and the Wisconsin Crew Corporation, packed the room.

The golden thread that ran through the thousands of words of talk was that, perhaps, the friends of crew - indeed, all Wisconsin lettermen - could perhaps join with the Athletic Board to solve the financial problems that threatened the crew budget.

The argument that crew was “a poor spectator sport, not a high school sport, not a Big Ten sport, and too costly a sport” were impressively countered by the close-knit group with statistics, nostalgia and testimony. “Aren't all sports intended for the participants rather than the spectators?” asked UW chemistry Professor Aaron Ihde. He wondered if a high school training was necessary to make a champion out of Wisconsin when we've had five national championships in the last 24 years made up of students 99% of whom never rowed before coming to college, and 80% of them coming from the State of Wisconsin .

Ihde continued, “Before you ask if crew is expensive, you should ask what you're getting for your money. Nothing is spent on scholarships; one-seventh of the student athletes are able to compete on 2 or 3 % of the Athletic Department's total budget; Wisconsin receives prestige of annual competition; and the program trains young men for possible Olympic competition.” Gus Bostad, stroke on the 1913 crew, said, “any outsiders would wonder how a dropping of crew could come about with our facilities and our record. They would doubt our judgment and our common sense.”

When Hirsch was asked HOW crew can stay, rather then WHY it should stay, the battle lines surprisingly fell a bit more. A proposal from George Rea, No. 3 seat on the 1942 varsity and an interim coach at UW during 1942-43, began to answer how crew can stay on campus. He figured if a small group of crew alumni can get together and effectively support its program when threatened, why can't the National “W” Club of all letter-winners get together when the whole Athletic Department is threatened - as it is? The crew people pledged their full support to the Athletic Department in helping where they can, but why should they tolerate the Athletic Department's problems as being “a crew problem?” Crew gives more than its money's worth as a competitive sport on campus. Why should it be a martyr for the whole department, when all alumni have the potential to raise the funds to make the entire program healthy?

Rea's suggestion became the cornerstone for further discussion. Board member Don Peterson, a former oarsman, said “Former letterman of all sports have an obligation to support the program they've taken advantage of, especially the grant-in aid lettermen If the job of athletics has been achieved as it should be, to show loyalty to the sport and to the institution, they should respond to the common purpose.”

Alumni Director Arlie Mucks resolved that “We can raise the money nationally if we exert the energy we've seen today from the Wisconsin Crew Corporation…we'll give full cooperation.” Rea's proposal for complete mobilization within the National “W” Club for the benefit of the total Athletic Department will hopefully gain a good response.

After many crew alumni letters to UW administrators; meetings of the Wisconsin Crew Corporation with Athletic Director Hirsh and the Athletic Board; the good fortune of a “modest ‘windfall' from Milwaukee Bucks playoff games, which got the athletic department in the black; and the generous support of crew friends and alumni, UW's Athletic Board advised the Wisconsin Crew Corporation that Mr. Hirsch's preliminary budget for next year contemplates support of crew next year.

May 8 at the Eastern Sprints, the UW varsity (6:21.4) was 5 th , behind winner Navy (6:17.2); the JV eight was 7 th and the frosh eight (6:51.8) was 6 th behind winner Navy (6:34.1). In the travel arrangements to Boston , the varsity and part of the jayvee went with coach Jablonic. Seventeen remained to travel the Thursday before the race event. To save money, the Athletic Department purchased 13 of 17 tickets as standby fares. At take-off from Madison , 6 of the 13 standbys did not get seats and had to drive to O'Hare to catch flights. On the return flights, including 23 of 34 as standbys saved the crew and the athletic department $825.

On May 15 on a 2,000-meter course on Lake Mendota , UW's JV-8 (6:27.8) defeated the Minnesota Boat Club (6:54.3). St. Thomas College was also scheduled to join the competition. The trip to Detroit to compete against Wayne State was cancelled for budget reasons.

Varsity pairs (w/out coxswains) were introduced into the IRA competition as the ‘sixth' men's heavyweight event. 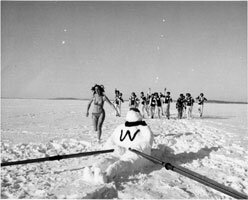 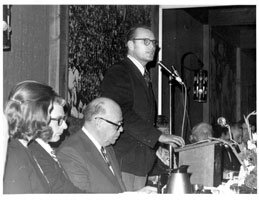 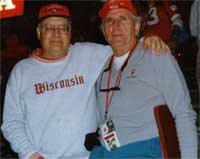