As a freshman, Jim Dyerby remembers hearing about an episode in which the varsity eight was successful in pulling out of the water and maintaining a water skier behind their shell. The skier, a small coxswain, was mounted on some larger-than usual skies to help spread the weight more efficiently over the water.

At the Head of the Charles, Wisco placed 7 th , in spite of losing its rudder midway through the 3 mile course.

Friday, February 11, the Wisconsin Athletic Board unanimously approved at least one more season of crew by okaying the season's schedule, even though it exceeds the Athletic Department's budget and includes no races in Madison whatever.

Athletic Director Elroy Hirsch, known to believe crew is too expensive a sport to support, in view of the fact it is not a Big Ten support, was mild in the Board's meeting, only pointing out that the crew schedule had ‘nothing in Madison' and that it was %570 over its travel budget of $10,000. Jablonic is trying to set up some kind of invitational meet here on May 20, but so far no opponent has been found.

On May 7, The Milwaukee Journal featured UW's crew in a color photo in their Sunday “Men's and Recreation Section,” noting “an eight man shell costs about $3,500. The oars are about 12 feet in length and weigh 10 to 12 pounds each.”

William N. Wallace, on page 1 of the Sports Section of the New York Times of June 4, 1972, under the headline “Quakers Lead All the Way at Syracuse - Brown 2 nd , Followed by Wisconsin,” wrote “Penn (6:22.6) won the eight-oared championship rather easily over Brown (making their best showing ever at the IRA's), Wisconsin, Washington, Cornell and Northeastern. This was Penn's first national championship (sic, Penn won the IRA's last in 1969). The Penn victory will cause embarrassment to the Olympic selection system. Invitations have been extended to 42 oarsmen. Only one (Penn rower), Gene Clapp in the 4 seat was invited, but seven will go from the Washington eight that finished fourth.

There were five different championships decided and each went to a different college. Washington won the second varsity final; Wisconsin the freshman; UCLA the varsity four-oared (plus cox) final; Princeton the freshman fours and Trinity of Connecticut (8:10.9) the varsity pairs without coxswain.

The Ten Eyck Trophy, awarded to the college whose three eight-oared crews do the best in varsity, second varsity and freshman events, went to Wisconsin (with 17; Washington was second with 13 and Cornell and Penn each had 11.). The Badgers boats finished third, second and first, respectively. This was Wisconsin 's first Ten Eyck Trophy award. Wisco had 17 points, with Washington second with 13, and Cornell and Penn tied at third with 11.

The final for the second varsity eights was the closest and most exciting of the 15 races. Washington (6:18.8), leading all the way, managed to win by two-tenths of a second over a fast-closing Wisconsin ( 6:19 ). (A video-tape of the finish had to be examined by officials to determine that the Huskies had defeated the Badgers. Sophomore Ken Nelson reports, “The video tape took a half hour to be ready for viewing, and it showed Wisconsin had actually crossed the finish line first. One official was heard commenting to another, “ Wisconsin won, but we can't change our call because they've already traded shirts.”)

At the Munich Olympics, the Badgers were represented by Randy Jablonic as assistant manager, Curt Drewes as boatrigger, Tim Mickelson (No. 5) as a member of the silver medallist “8” and Stewart McDonald as the coxswain of the “4 with” entry.

The University of Wisconsin rowing program has managed to break the bonds of adversity created by a changing academic calendar which in turn is shackled to a northern climate. The basic structure of our rowing program is as follows. We row six days a week in the fall up to the Head of the Charles. Very little rowing is done after October 25 due to the prevailing northwesterly winds. When we cannot row, we encourage the men to run any long distances which will push their personal limitations.

The dock is finally pulled in mid-November and from that point on, land based training begins in earnest continuing five days a week to first semester's end. Second semester (mid January) begins a six day a week program which continues through the racing season. We look for open water around April 1. Last year (spring 1972) our docks weren't put in until April 21.

A great deal of emphasis is placed on short workouts. All land based training is limited to roughly one hour and seldom does water work exceed an hour or an hour and one quarter. The land based training generally consists of three alternate days of rowing in the tank combined with weight lifting. The remaining two or three alternate days of the week consist of cross country, hill or stadium running for cardiovascular development. While workouts are kept exceedingly sort by most standards, a great emphasis is placed on daily attendance by setting the program up as a building block model whereby each day is important to the entire structure.

I look at four rather broad areas of development: mental, rowing technique, strength and stamina. It suffices to say that mental conditioning goes along with and must be developed with the three latter points. It would be unfair to use the term brainwash here when your real objective is to provide logical rational conviction, desire and motivation directed to a specific goal or achievement. Inasmuch as everyone would take a personal approach in this area, I will drop it here.

Rowing technique must be developed to the highest level and I am not sure what approach you would take without a tank.. We have a dead water tank. Water time in the tank for the varsity squad and the freshmen who began in the fall is limited to 30 minutes a day every other day for three days a week or 90 minutes per week or six to seven hours per month from November 15 to April 1, approximately.

Tank workouts of 30 minutes are followed by 30 minutes of weight lifting to make the day We generally do not lift for weight but strive to develop repetitions and limit the exercises to but a few.

Perhaps the most important part of our training is in cardiovascular development. It was my impression that races were not won nor lost in Munich by virtue of good or bad basic technique. In my observation, it was a question of deteriorating technique resulting from a lack of stamina or endurance to maintain proper and powerful rowing form.

Due to the limited time allowed daily workouts, it is rather difficult to over-train. I feel the maximum motivation that can be achieved for one hour's work is far short of peak training and working with college personnel, but an hour of intensive work is all they can handle with good concern for their academics. 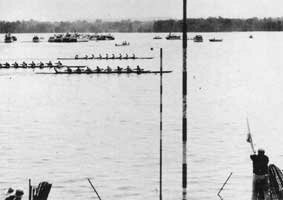 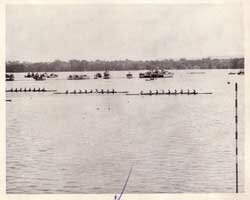