The UW Women's Varsity openweight rowing program began in 1974, after starting as a club sport in 1972.

In June of 1974, Jim Dyerby announced he would be dropping out of crew. He had been accepted early into UW medical school and was unsure how much time his studies would require. His roommate was Doug Trosper, who became the varsity stroke with Dyreby's departure. In January, having discovered he was able to handle the academic load and still practice for crew, Dyreby re-joined the crew team and won back the stroke seat. Trosper moved to stroking the JV-8. A note of regret reflected in Dyreby's description of this awkward result, as he says, “I know they would have won the IRA's with Doug at the stroke.”

Quoted in the news before the Midwest Championships, coach Jablonic said memorably, “Freshman coach Bob Eloranta can boat a team with nobody under 6'5”. They might be slow to come along, but for strength and stature they're head and shoulders above what we've had.”

The New York Times coverage of the IRA's read,

Wisconsin (6:08.2), a crew that by rowing standards could be described as scrawny, won the national intercollegiate championship today on Onondaga Lake . The Badgers defeated five other finalists in the varsity race, leading MIT over the finish of the 2,000 meter course by the length of a racing shell or about 60 feet. Wisconsin also won here in 1973 and 1974.

After MIT came Northeastern, Cornell, Rutgers and the Coast Guard Academy . The winning time was respectable - 6 minutes and 08.2 seconds - as the wind finally abated. ‘They may be small but they pull awfully hard and they love it.' Said Coach Randy Jablonic of Wisconsin. The Badgers were pulling on their oars at 37 strokes to the minute down the course, breaking away from the Coast Guard in the first 200 meters and establishing a one-length lead halfway through the race.

The winning crew averaged 179 pounds in weight, 10 to 15 pounds below what one usually finds with championship eights. The boat features Eric Aserlind rowing in the bowman's seat and he weighed 154 pounds. ‘We call him Super Flea,' said Jablonic. The stroke, Jim Dyreby, was big enough. He stands 6 feet 6 inches and weighs 190.

Stung in the frosh and jayvee races by slow starts, the Wisconsin varsity took advantage of the calmer starting conditions at 5:00PM and got away well this trip. First was Coast Guard, on the inside, with Cornell chasing. MIT and Northeastern, the two other favorites along with the Badgers, took off slowly.

After about 500 meters, the Badgers took over the lead, with high-stroking Cornell still second, as Coast Guard dropped back to third. At the halfway mark the Badgers had open water on Cornell, but MIT was moving up into the pack.

In the JV race, delayed 12 minutes, when the Northeastern bow - Brian McDevitt - got thrown out of the shell in the first few strokes, the crews got away smartly. Cornell started winging and built up a fair lead during the first 500 meters. A quarter wind slowed the pace. But MIT began to melt the Big Red's margin. Wisconsin, on the outside, and Northeastern began fighting it out for second, as Cornell dropped back. As the crews approached the finish, a large barrel drifted into the No. 3 lane, being rowed by Northeastern. Fortunately, the Huskies barely missed the metal object which would have ruined the shell, and just got up to nose out Wisconsin for second, just a deck length off the pace. MIT (6:38.4) was the winner - their first in any category at the IRA's, followed by Northeastern (6:43.4), Wisconsin (6:44.3), Cornell (6:46.4), Coast Guard (6:46.8) and Syracuse (6:48.6).

In the freshman race, Penn, the Eastern Sprints champ, were rowing in the more sheltered inside lane and the Quakers made the most of it. The Red and Blue oars jumped away first from the stakeboats chased hard by Rutgers . The Orange was third through the first half, with Wisconsin on the outside getting a poor start. With 500 meters left, the Orange took over the place spot and it looked like they were getting to the leaders as the Badgers came flying along the log boom. Penn, however, took it up to 38 with about 250 left, and held the orange off safely, winning by just a little bit more than one full length in the time of 6:43.8. Syracuse was second at 6:48.3, followed by Wisconsin (6:52.4), almost a full length behind, then Rutgers (6:54.3), Cal (6:55.8) and a disappointing Princeton (second to Penn at the Eastern Sprints three weeks prior) at 6:57.4).

The Varsity 4 without - Jim Sullivan (bow), Dave Eloranta (2), Jim Freeman (3) and Joe Knight (stroke) - also won their IRA event with a time of 6:29.6, defeating Boston University (6:37.2) and Yale (6:44.8). The Frosh 4+ was seventh. The Milwaukee Journal of June 1, 1975 quotes Jablonic describing John Ambrose (stroke of the Frosh 4+ in the qualifying heats) as having broken his toe Thursday while playing Frisbee. On Saturday, the Frosh 4+ was UW's only boat not to make the finals. Jablonic planned to replace Ambrose with Nestor Dominques or Vern Frol.

Coach Jablonic, even after three straight IRA victories in the varsity eights, remembered one doesn't always stay on the top. When he turned to accept congratulations from a Nebraska oarsman - the Huskers had finished 14th in the 14-team field for the varsity eights - the graduating senior said to Jablonic, “Thanks for the pep talk you gave us. I'm going to graduate school and help coach our crew.”

“Well nothing would please me more than to see you guys breathing down our necks some day. Remember, you don't build a crew program from scratch in one year,” said the Wisconsin coach.

The Conference Medal of Honor (formerly the Big Ten Conference Medal and before that the Western Conference Medal), awarded to one athlete from each Big Ten school for athletic and scholarly prowess (or “the greatest proficiency in athletics and scholarhip”), was awarded to Jim Dyreby at Wisconsin in the spring of 1975. Awarded since 1914, other Badger oarsmen who've won the award include Martin T. Kennedy ('15; crew and football), Howard J. Bentson ('24; crew, football and water basketball), Jefferson D. Burrus ('27; football and crew) Louis Ernst Oberdeck ('31), Howard Huen ('36), Carlyle Fay ('48), Don Peterson, ('49) and James Moran ('53).

What makes a good coxswain:

Coxswains are often berated. That's part of the tradition. Besides being light and good at steering, a good cox must be intelligent. He has to always be thinking about strategy. His highest skill is empathizing with the guys in his boat. Knowing what his rowers are capable of doing and a little more. When to take advantage of that adrenaline kick at the right moment to get the most from his teammates. And being mindful of not taking a ‘power 10' at the wrong time; if you take a ‘power 10' and your competitor then takes one and regains the lead, it can leave your the rowers demoralized. It's mostly empathy built up from a season of getting to know the rowers in the boat. 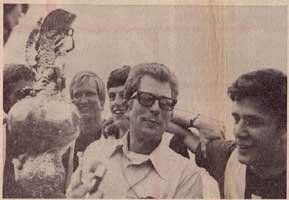 Back Cover of 1975 IRA Program 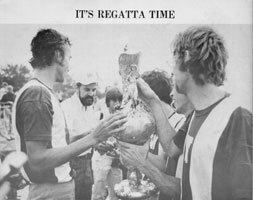 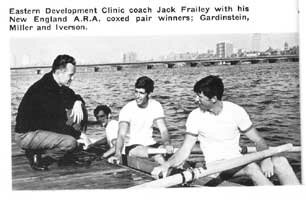 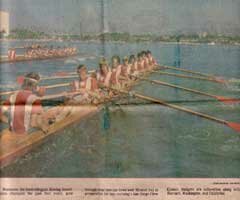