At the Cochrane Cup May 8th on Madison 's 2,000-meter course on a wind swept Lake Mendota , the varsity event faced a 23 mile an hour west wind. Wisconsin had open water on Dartmouth at 650 meters, the same on both crews at the 750 meter mark and led by two lengths at the mid-point of the race. Dartmouth was second at the 1,000-meter mark by ¼ length over MIT and made a good closing surge in the final 600 meters to close to 1 ¼ lengths of the Badgers and gain a length on MIT. Wisconsin won in 6:01.9 (a record), followed by Dartmouth (6:06.9) and MIT (6:10.9). UW's boating: Fred Robertson (bow), John Mercier, Karl Newman, Tom Schuchardt, John Bauch, Ed Jackson, John Storck, Pat Litscher (stroke) and Hal Menendez (cox).

The varsity heavyweight race was a good one with the lead changing twice. Penn had the best start but at 500 meters Wisconsin moved into first place with a deck-length lead over Harvard in the adjoining lane. The water was smooth and conditions good. Ollie Shore , the stroke oar, in command of Harvard's destiny, did not let Wisconsin get very far out in front which was important. ‘We didn't take any 10 power strokes or anything like that,' said Bruce Larson, Harvard's coxswain. “We just passed them and kept on going. We just breezed right by them,' Larson continued in describing the key moment of the regatta on Lake Carnegie.

The Crimson boat passed Wisconsin at 1,200 meters of the 2,000-meter course (1.4 miles) and won by a boat length. The unbeaten Harvard crew, which had an easy time of it this season, got the challenge which it sought from the Wisconsin eight. ‘It was by far our hardest race,' said Larson

The Ten Eyck Trophy event-weighting formula is changed in 1976 to give more weight to the three eights events.

Headlined “California Varsity Crew Victor, Wisconsin 3rd ,” William Wallace wrote, “With perfect execution of the race plan of their coach, Steve Gladstone, the California (6:31) youths upset the favored Wisconsin crew and persevered in a tough varsity final that saw all six boats finish within eight seconds or two lengths of a 60-foot shell.

Wisconsin 's Badgers did not have it in the last 400 meters of the 2,000-meter (1.4 miles) course and wound up in third place. Princeton accomplished a commendable second, three-fourths of a boat length behind the winners. Penn was fourth, MIT fifth and Syracuse sixth. The winning time was slow, 6:31 , because of a moderate headwind on an otherwise perfect afternoon enjoyed by 20,000 spectators.

Cal Coach Steve Gladstone knew to tell his crew to look for a big Wisconsin push at 1,500 meters, which is where the Badgers like to overpower the opposition. The Golden Bears were a close first all the way with Wisconsin second until near the end. Then Princeton came up second, the best showing for a Tiger varsity at the IRA regatta since a similar second in 1952. Penn came from fifth to fourth at the end and MIT from sixth to fifth over Syracuse .

Curt Drewes, who began rigging for the University of Wisconsin crew when Franklin Roosevelt was President, retires after 37 years. Drewes stepped in to coach the crew team in 1944 while then-coach Allen Walz went off to war, but the highlight of Drewes' career came in 1972. That was the year he was selected by a pool of coaches to be the rigger for the United States Olympic crew. The German-born Drewes was especially pleased because the Olympic Games were held in Munich . 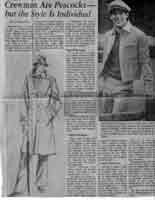