At the time, Wisco boat launched from the Harvard boathouse dock. The boats were on trailiers outside the boathouse. It was rather congested but fun.”

Cox Paul Smith's eligibility ended after the fall of 1977, so a new cox led the varsity in the spring of 1978.

While practicing March 22 on the Rock River near Edgerton , WI - an annual (first year?) ritual for the Badgers during the Easter break - The Janesville Gazette's Jim Brill interviewed Coach Jablonic. “This sport is so unique because of the isolation of the individual in a team effort,” Jablonic explained. “There's very little recognition for the individual's singular part in the team effort. There are no real heroes,” he went on.

Admittedly, rowing is a repetitive thing, but that is kind of deceiving. Each stroke is different - like golf. I defy you to put a golf ball on a tee and hit it exactly the same way each time. The same is true with rowing. We've got to analyze and perfect each stroke as it attempts to reach perfection.

That drive for perfection is readily obvious. The UW team encounters only for or five regattas in its entire season, but training is a year-round demand. The crew members run mile after mile during the cold winter months. They lift weights and row in an indoor cement tank that gives the coaches an actual visual comparison of improvement.

Many people look at rowing in action and love the ballet-type appearance,” Jablonic continued. “But they don't realize that it's very violent inside the shell. There's a lot of noise, movement and turbulence. But the outward appearance is so graceful,” Jablonic said. “This sport takes a great deal of dexterity and coordination, believe it or not, these are some of he finest athletes in the school. And we rarely have a poor student. This takes such self-discipline, desire, dedication. It takes a very analytical mind to not get bored out there during those 15 mile workouts. One must be able to concentrate on each singular stroke during all of that time, and a small mind could not do that.

Crew member Jim Seefeldt further explained, “You start out the race (which is usually 2,000-meters long) with a big push. During the middle, you kind of settle down and prepare for the big push at the end - the part that you do all the training for. Then, in the end, you give it everything you can give - with control.”

It's certainly not one of the glory sports, but it definitely is one of the most intense, concluded sportswriter Brill.

In The Edgerton Reporter , sportswriter Tom Thrun also wrote an article. “Because of the Yahara River being frozen near Madison , where practice usually takes place during Easter break, the team is using the Rock River for its practice runs. Local residents maybe able to view the practice between Hwy. 51 bridge and Lake Koshkonong .

At the University of Wisconsin , the rowing receives considerably less financial help than do other sports, and for this reason, the Wisconsin Rowing Association was established.

R.Y. Nelson, of the Nelson-Young Lumber Co., Edgerton, currently is a member of the association, and is partly responsible for the team's practicing at Edgerton He was the Captain of the rowing crew in 1952.”

March 18, the Wisconsin Rowing Association crew banquet was at the Park Motor Inn in Madison .

Note: For much of the 20+ years UW has rowed in the spring in Edgerton on the Rock River , “R.Y.” and Judy Nelson have been of invaluable to UW's visiting spring crews. Meals were offered, wood for the launching piers was given and unending help with arrangements, including making, putting in and taking out the piers each season. Mrs. Nelson also labored long and hard on at least two crew scrapbooks that have been archived in the crew house and/or the Archives of the Memorial Library.

The April 1978 UW Crew Newsletter , referenced an April 11 article in the Wisconsin State Journal describing the Athletic Board's “tremendous financial concerns” in the Athletic Department. The concern is the Board solves its financial problems by cutting non-income producing sports. A permanent endowment fund was stressed as important “to insure a secure future for Wisconsin Rowing.” The May 1978 UW Crew Newsletter confirmed the Athletic Board, in its April meeting, suggested gymnastics be dropped. The Athletic Department was reported to have “finally gone to the State Legislature and requested financial assistance to help maintain existing (sports) programs.” An appeal was made to contact each reader's elected representative.

On April 29 h , the sixth annual Midwest Rowing Championships, sponsored by the West Side Lions Club and the Midwest Championship Rowing Association, were held on a windy and white-capped Lake Wingra , with headwinds often reaching 15mph. Wisconsin's varsity eight (6:32.5) - in a contest described as too close to call for much of the race with UW, Purdue and Marietta bunched in the lead - finished less than half a boat length ahead of Purdue (6:35.9), Marietta (6:39.6), Washington State (6:42.9), Wisconsin “B” (6:43.1) and Wichita State (6:49.4). Purdue Coach John Bodine was very satisfied with his crew's performance. “The best Purdue crew in the last 10 to 15 years,” Bodine said. “I like to win, naturally, but a coach would have to be crazy not to be happy with this finish. After all, nobody beats Wisconsin .”

On May 6th , the Cochrane Cup on the Connecticut River in Hanover NH was rowed on excellent water on a warm and partly cloudy day. Dartmouth took the lead at the start and never relinquished it, despite a challenge by the Badger boat midway through the race. Dartmouth (6:03.6) defeated Wisconsin (6:10.8) and MIT (6:13.2). “We were very, very slow off the starting line and never seemed to fully recover,” said coach Jablonic, who went on to say Wisconsin 's lack of practice time again affected his crew's performance. “We had only two practices this week,” he said. “I'm certain that if we could get some rowing time this crew could become faster in an explosive manner.” UW's boating at the Cochrane Cup: Ken Lawrence (stroke), John Olson (No. 7), Dave Zweig, Mike Gasper, David Kufahl, David Krumpitch, Mike Gitter, Dan Wilms (bow) and Paul Smith (cox).

At the May 14 Eastern Sprints on Lake Quinsigamond in Worcester, MA, Wisconsin (6:11.6), after missing qualifying for the championship finals by a quarter of a length, finished 4 th in the consolation bracket (10 th overall) behind petite final winner Penn (6:04.8), Princeton and Dartmouth. “We took the lead at the start and held it, but this may have been one of our errors. We were surprised at the speed we had and we didn't know what to do with it, so we had to struggle at the finish just to row collectively,” said Jablonic. UW's boating: Chris Landry (stroke), Dave Moecher (No. 7), Dave Zweig, Dave Krumpitch, Bill Olsen, Mike Gasper, Mike Gitter, John Olson (bow) and Paul Smith (cox).

The annual crew picnic was held May 27 at the boathouse. Dave Schultz and Mike Steno shared the “Pickle Boat Captain” award.

Penn, in addition to being victorious in the varsity eights, won the Ten Eyck Trophy with oarsmen qualified for the finals in all events.

The trophy was named after Syracuse coach of 1903-1938 who had placed the university at or near the top of the oldest collegiate sport. It took a long time for the Orangemen to climb back to the top and they finally made it with a powerful, low-stroking crew.

Results in the varsity eight event: Syracuse (6:39.5), Brown, Northeastern, Penn, Dartmouth and Cal ; and in the consolation: Princeton (6:44.3) and then Wisconsin (6:44.4). “We pulled a complete crab at the start of the race,” Jablonic said. “After that, I didn't think we had a chance. But the interval we lost by was three-quarters of an inch.”

JV-8 results were: Penn, Northeastern, Syracuse , Brown, Cornell and Boston University ; in the consolation: Wisconsin , Trinity “A” and “B” and Purdue.

Madison was selected as an Olympic Development Center and Coach Jablonic worked with the crews all summer.

James Tuite of the New York Times wrote an article titled Rowing: Bond of Rare, Mystical, Tough Breed which describes the rush and intensity of rowing and the sometimes elusive reasons for competing in the sport. The article is copyrighted, please contact the webmaster if you would like to access it.

Fall of 1977 Head of Charles Varsity

Back row (left to right): Dan Wilms Mike Gasper Mike Gitter Chris Landry Paul Smith Dave Moecher
Front (left to right): Jay Starr Dave Zweig Doug Verhaalen
Photo taken at the alumni tent near the finish, or just up stream of the Harvard boathouse after the race. At the time, Wisco launched from Harvard's dock.
(per Al Erickson e-mail of 1/3/02 ) 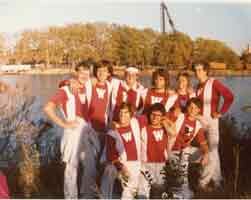