The Head of the Charles was October 19, 1979. “In the first mile of the race, Wisconsin accomplished one of their most important tasks. Starting #4, the Badgers passed #3 Dartmouth on the long straight-away. In the last mile, no one could overcome Princeton’s speed, which seemed to come from passing Brown in less than 30 strokes. Wisco’s time was their best since 1973 when they won the race.” The order of finish in the Championship Eights event was Princeton (15:28.3), Wisconsin (15:31.3), Northeastern (15:33.7), Navy (15:33.8), College Boat Club, PA (15:36.9) and Potomac Boat Club of DC. The varsity boating: Curt Jelinek (bow), John Jablonic, Dan Royal, Jim Seefeldt, Paul Lambert, Aaron Jacob, Ken Lawrence, Al Erickson (stroke) and Tom Kirk (cox).

The December-January newsletter announced the Athletic Board will have converted Humphrey Hall’s basement to a locker, shower, office and lounge for the women’s rowing team and also that the Athletic Board established as a number one priority an addition to the crew house for more another boat storage bay and training tank.

The 1980 Crew Banquet was held March 15 at the Sheraton Hotel in Madison, where Prof. David Tarr, President of the Athletic Board, was the featured speaker.

May 4, UW (6:01.8) won the 20 th annual Cochrane Cup over Rutgers (an invitational entry at 6:02.6), Dartmouth (6:08.3) and MIT (6:11.9). Wisconsin Coach Randy Jablonic, who watched his Badgers take the lead at the 300-meter mark and then slowly pad that advantage, was reserved in victory. “ Rutgers was very tenacious, “Jablonic said. “They hung on and rowed a very high beat. It was a very controlled, deliberate victory.”

In the Eastern Sprints in Worcester on May 11,

...the Rutgers and Navy heavyweights were noticeably absent. Rutgers may not compete in ECAC this year due to that school’s ill-fated attempt to shortchange the conference on television revenues. Navy decided to do well on their exams.

The UW men’s varsity (6:43.8) finished third, behind Harvard (6:36.7) and Yale (6:40.4); following were Cornell (6:46.2) Northeastern and Princeton. Harvard jumped off to a quick lead and won by slightly more than one length. “We rowed a very conservative race from the start because of the (windy) conditions. If the race was any longer, we would have certainly passed Yale and maybe Harvard, “ said Coach Jablonic.

On May 24, on a 2,000-meter course on Lake Mendota, sportswriter John Hughes wrote, “the day was hazy and sultry, with uncharacteristically calm water. The Badgers even got lucky by breaking a weak back stay during warm ups, instead of during the race. UW had lost to Washington earlier this year and Washington had recently beaten a powerful Cal team to win the Pacific Ten Rowing Championships.

From the start, Wisco jumped to a half-boat lead in the first 500 meters and stretched it to three-quarters of a boat by the half-way mark. Then Washington made its final move and closed only slightly before falling back. The Badgers had open water between them and the Huskies at 1.750 meters and their winning margin was about a boat and a quarter.” The UW (5:59.9) varsity defeated Washington (6:03.7) in a rivalry which dates back to 1910. The UW boating: Clayton (“Ky”) Rider (bow), Aaron Jacobs, Paul Lambert, John Jablonic, Jim Seefeldt, Chris Landry, John Struer, Al Erickson (stroke) and Tom Kirk (cox).

The annual crew picnic on Babcock Drive was held May 24 after the UW-Washington race. Donald Tipple was awarded the “Pickle Boat Captain” award.

The IRA finals were delayed a day (finishing Monday) in Syracuse because of the heavy cross winds up to 30 mph and the threat of thundershowers; up to 15,000 spectators were turned away, as only one of the 20 races scheduled were held. Re-scheduling problems hit every school, as some schools had exams to finish, others were trying to get to graduation ceremonies and the western schools had t re-book Sunday morning airplane reservations.

Results were varsity eight - Navy (6:46.0) edged out Northeastern (6:47.5), which was followed by Brown, Wisconsin, Cornell, Syracuse. “ Wisconsin’s varsity eight came off the starting line well and even took an early lead. At the half-way point, the Badgers were a half-length behind. Then the Badgers were struck by two severe crabs - a lose of control of the oars, or, as UW Coach Jablonic puts it, ‘like a fumble - you have to chase it to gain control.’ He said that coxswain Thomas Kirk said that the crabs ‘practically stopped them dead.’ ” This was Navy heavyweight’s first appearance at the IRA’s in four years.

In the junior varsity eight event - Cornell (6:53.6), California, Brown, Northeastern, Orange Coast and Rhode Island (UW had no entry in the JV-8 event); and in the freshman eights - Orange Coast (7:21.9), Syracuse, Navy, Wisconsin (7:30.5), Cornell and Northeastern. Northeastern’s shell was washed by power boat wave and lost with 600 meters to go.

Wisconsin’s pair - (Franklin Remington (bow) and Curt Jelinek (stroke)) “scored by a length. ‘Wisc’ had much the best time in the straight pairs, winning its Thursday heat along with Worcester Poly and Trinity. It was the first of two straight victories in small boat events.” Final finish: Wisconsin (9:03.9), Worcester Poly (9:07.7), Oregon Tech, Trinity, Cornell and Yale.

Coach Jablonic is well-known and well-loved for his ability to communicate simply, directly and effectively with his oarsmen. It was his practice at every end-of-the-season IRA event, where his seniors might be rowing the last race of their college or rowing careers, to speak with each of them personally and intimately from the launching pier. Shaking their hands, he might say, “Thank you for rowing for Wisconsin.. It’s been a pleasure working with you for four years. This may be your last race and I want you to have the best race of your life.” To the underclassman in the boat, he’d remind them this may be a senior oarsman’s last race and it was up to them individually to help make this the best possible race for that senior.” As Jablonic pushed off the shell, he would often add, “Push hard and it gets easy!”

Before the 1980 finals of the Varsity 4 + event, Jabo noticed his Badger entry had slipped away from the launching pier before he had been able to speak with them. As the four-oared shell had headed away from the starting line and was making a wide circle back past the shore where he was standing, Jabo shouted “Come back here? You forgot something!” The coxswain steered the shell toward the shore but could neither find an open pier nor a place to get very close to the shore. Jabo then waded out shoulder deep into the water to extend his ‘last race’ send-off to each senior, including stroke Ken Lawrence.

Lawrence later told coach Jablonic the gesture so moved him and others in the boat that there was nothing else the boat could do but win, and they did. With the UW varsity 4+ (Ken Lawrence (stroke), Ned Kline, Dan Royal, Brian Steinbrecher (bow) and Matthew Franke (cox)), “the Badger entry completed the IRA’s lone double victory (UW’s Pairs without coxswain entry had also won). After winning the heat, along with Navy and Princeton, the Wisconsin “A” went to be the lone finalist to crack eight minutes in the finals” and won. Final finish: Wisconsin (7:57.6), Navy (8:04.2), Worcester Poly, Washington State, Yale and Princeton. 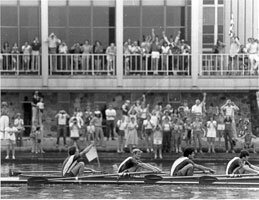