In the spring newsletter, the WRA announced the beginning of the biggest fundraising drive in the history of Wisconsin rowing - the goal: an addition to the UW boathouse.

The rowing banquet was planned for March 19 at the Holiday Inn, Southeast. The raffle at the banquet raised $60,000 toward the proposed boathouse addition. John Morgen donated the 1983 Ford Escort and the $1,000 prize to the raffle; Tom Hayworth contributed the trip to Jamaica; Bernie Losching contributed the $1,000 won at the raffle and Fred Emerson donated $5,000 to the boathouse fund.

Wisconsin did not attend the San Diego Classic.

April 30, the Midwest Regatta was held. The varsity eight race took on unusual significance this year for two reasons: the Badgers had lost the event the last two years to Purdue and UW had to win their varsity eight event at this regatta to receive an invitation to the San Diego Classic. The WRA Newsletter of May 9, 1983 (p. 3.) described the varsity eight action:

Wisconsin had worked on starts. The strategy was to get as much of a lead as early as possible. Purdue was known to be a strong finisher. But Wayne State was supposed to be quick off the line. The Badgers got out to a quick lead. Coming past the docks (650 meters gone), they had a ¾ length lead on Wayne State, which had two seats on Purdue. Purdue had just pulled past Wisconsin’s JV (the JV-8 event had been canceled) and Kansas with Notre Dame barely a length off the pace. Purdue began to pass the Wayne State crew shortly after that.

Wayne State expended their best effort to hold off Purdue but could not hold second past the 1,000 meter mark. Wisco’s JV continued to try to overtake Kansas. After the 1,000-meter mark, Purdue began to make its move on Wisconsin. Seat by seat, Purdue battled closer to Wisconsin. Wayne State, having expended its energy unsuccessfully trying to hold off Purdue, began to fade. Kansas rowed through them with Wisconsin’s JV still trying to move on Kansas. Notre Dame held close but was unable to move on Wisconsin’s JV. The closest race in the history of the regatta approached the finish line with every position in doubt.

Wisconsin (5:53.2) was second in Cochrane Cup in Cambridge on the Charles, a half-length behind Dartmouth (5:52.4); MIT (6:05.1) was 2 to 3 lengths off the pace. Coach Jablonic “believed he had the better crew on the water that day, and that his oarsmen simply rowed lacking the mentally organized commitment to win that is such an essential part of 2,000 meter racing.”

The frosh eight started in the pack with Brown and Harvard in the early lead. Wisconsin gradually moved past Penn and then Princeton into third place down the middle third of the race. Harvard (6:17.6) pulled an incredible sprint and sailed past Brown ( 6:19) to win. Wisconsin (6:24.5) was then able to hold off furious challenges from both Princeton (6:25.6) and Penn (6:26.7) to win the bronze medal.

In the Walsh competition (around May 30), UW won four of the seven competitions against Navy, but the Navy (5:59.9) oarsmen scored a two-length victory in the varsity race - the Middies opened a one-length advantage halfway through the 2,000 meter race and gradually moved it up - to retain the Buck Walsh Trophy for the third consecutive year in competition against the Badgers (6:07.5) on the Severn River. In the JV-8 event, Navy won by seven lengths and in the varsity fours without coxswain, Navy won by 2 ¼ lengths. In the frosh eight event, UW (6:10.5) defeated Navy (6:11.6). Wisco won the varsity 4+ by 2 ½ lengths at 6:51.0 and the frosh 4 + won by ¾ lengths at 6:55.5. In the pairs, UW won by a length over Navy.

The spring picnic was planned for May 19, the changed to May 21, at the Crew House. Mark Zupke was given the “Pickle Boat Award.”

May 31, UW faced off against Syracuse University in a warm-up just before the IRA’s. Competition was based on winning two of three heats held per event. UW’s crew defeated Syracuse in four of six events on a 1,000-meter course Sunday on Onondaga Lake. The varsity eight competition was won in consecutive races by Syracuse, as was the JV-8 event. The Badgers captured the varsity 4+ and the frosh 4+ as well as the varsity 4- and the freshman eight-oared competition.

Brown, averaging 180 pounds per man, 10 to 15 pounds lighter than the five other crews, had luck in its favor when the head winds, which favor heavier crews and had been blowing throughout the earlier afternoon races, died for the 5:00 PM final. The varsity eight finish was Brown (6:14.4), Navy, Northeastern, Syracuse, Pennsylvania and Princeton. In the second varsity event, Navy won, followed by Princeton, Syracuse and California.

Brown was forced to borrow a Wisconsin oar for Jon “The Beef” Smith, No. 5, when the carbon-reinforced fiberglass shaft shattered into two jagged pieces during a short practice run just prior to the featured varsity eight race. Maybe it was the way his oar flexed. Maybe it was the sound the oar made in the water, But Friday Smith, a 6’3” oarsman weighing 205 pounds, had a premonition. ‘I turned to our seven-seat man (Val Ferne) and said “I’m gonna break my oar. I know. The funniest thing is, we had a running joke about my oar. I’ve always had a hangup. I’m always saying ‘That’s my oar. Don’t touch my oar. When it broke, I wasn’t sure what we’d do.

Wisconsin came to the rescue. Loaning Smith a substitute. It was a little heavy and a little cumbersome but there was no great problem when Brown finished half a length ahead of Navy. Brown Coach Steve Gladstone protested when told by officials he could not hold up the race to get a spare Bruins oar. Obviously, he did not pursue that protest following the race’s finish.

Neither the New York Times nor the Syracuse Herald-American’s June 5, 1983 coverage of the race described the freshman eight victory by Wisconsin (6:55.1), which was followed by Penn (6:58.4), Brown, UCLA, Northeastern and Navy.

Navy (249.75) won the Ten Eyck, having won the junior-varsity event and the varsity pairs-with-coxswain event; Wisconsin (170.20) was second. A record 30 schools, represented by 87 crews and about 600 oarsmen, were entered in this year’s competition.

Coach Jablonic coached the national heavyweight eight in summer practices on Lake Mendota and also on Lake Own in Cable, WI in anticipation of the September 2-6, 1983 World Rowing Championships in Munich, West Germany. UW rowers Al Erickson, John Streur, Bob Espeseth, Paul Lambert and Neil Halleen were part of the summer squad. The U.S., medalling for the first time since 1974, won a silver medal in the four oars plus cox (behind East Germany) and a bronze medal in the eight plus cox, behind the Soviet Union and Great Britain. 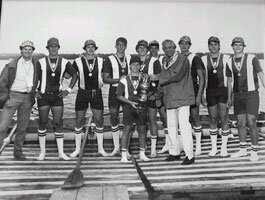