November 28, the WRA Newsletter announced the WRA Board approved an outlay of up to $17,000 for development of a Master Plan for Phases I-III of the boathouse expansion (Phase I-shell storage addition; Phase II-second indoor rowing tank and Phase III-doubling existing locker and equipment room capacity).

March 10, the Annual Crew Banquet was held at the Inn on the Park.

March 17, the varsity went to the Rock River for spring break and were again assisted by the good hands of R.Y and Judy Nelson. The frosh men trained in Marietta, Ohio.

April 29, the Midwest Regatta was held on Lake Wingra, after a day’s postponement and rain the last three hours of racing on Sunday. The Badger men rowed at about 33 strokes per minute to about 30 or 31 for Purdue and began to pull away at the halfway point of the 1,850-meter race. Jabblonic, watching from behind, said he saw Purdue make a move with about 350 meters to go, at which point Wisconsin answered the challenge. “All of a sudden, we were gone,” he said. “Our coxswain (Mark Rowell) obviously had made a move. I kind of let out a sigh and I hoped we could hold it.” In the varsity eight: UW “A” (6:18.04), Purdue (6:28.25), UW “B” (6:35.49), Wayne State, Kansas and Michigan. UW’s boating: Chris Schulte (bow), John Heinrich, Tom Tryon, Mike (John?) Schultz, Hans Borcherding, , Mark Berkner, Rich Hallett, Matt Brown (stroke) and Mark Rowell (cox).

May 19, the Spring Picnic was scheduled. The “Pickle Boat Award” went to Sandie Pendleton.

May 27, a race against Syracuse in Syracuse was scheduled. In two 1000-meter races, UW lost by a length and a length and a half. For the JV-8, both UW fours got into an eight to win both their races. Wisconsin also won the varsity pairs and four+ in tight races. With the frosh 4+ also in the two races, Wisco and Syracuse split with one win apiece

In 1984 the Open 4+ replaced the 2+ as a small boat event in the IRA’s, maintaining the total heavyweight events at eight.

On June 1, Navy, having lost its undefeated status finishing third at the Eastern Sprints, wore “Raging Back” emblazoned on their racing shirts for the IRA’s. Navy (5:57.7) then won the varsity eight race over Penn, California, Syracuse, Cornell and Brown. Wisconsin’s varsity (6:31.6) was third in the Petite Final (9 th overall), a half-length behind winner Northeastern (6:29.5). In a newspaper comment a year later, David Elfin wrote,

W isconsin came with a strong contingent, but then shocked the rest of the competitors by switching varsity shells the day before the regatta. The Badgers limped home with just one championship. 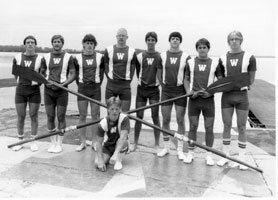