October 27, the Adrienne Carnahan shell (donated by Kent Carnahan, a “W” winner in 1964 and 1965) was christened on top of the boathouse. At the Purdue-Wisconsin football half-time, the John and Ellen Morgen shell, donated by the Morgens and David C. Falk - a contemporaneous rower with Morgen – was dedicated.

At the Head of the Charles, UW’s varsity placed 12 th.

November 10, at the Purdue vs. Wisconsin (won by UW 30-14), two shell, the John and Ellen Moran and the David c. Falk were presented at halftime on the Camp Randall football field before 70,000 fans. The shells took up forty yards of the playing field.

December 27 - January 13, the crew went to Florida to practice for the first time in 18 years.

On February 9, approximately 350 participants from seven Midwestern states competed in nine events in the Third Annual Midwinter Crew Classic in the Great Hall of the Memorial Union. Rowers twelve at a time competed to finish five miles on their ergometers. In the open men’s final, K. Kiser (7:47.01) from Purdue was first, teammate M. Peters from Purdue was second (8:01.72) and Dan Gehn (8:03.63) from UW was third.

March 9, the Wisconsin Rowing Banquet was held at the Sheraton Inn.

In April, Wisconsin places 4th in the San Diego Classic. The team’s winter workouts leading up to the spring’s first contest in San Diego are described in a cover story of The Milwaukee Journal Magazine headlined “In Training for UW’s Toughest Sport.” Written by Dan Olesen, with photos by Ned Vespa, the piece continues:

A confection of snow, waist-deep, decorates the shore of Lake Mendota and frosts the motley old and modern buildings that make up the proud University of Wisconsin campus. It is 4 p.m. on a January day. The temperature is 10 degrees. Six men are running backward up a lakefront hill in waist-deep snow, carrying other men, piggyback. Other men are playing leapfrog through the snowdrifts on frozen Mendota. What goes on here?”

‘This is our newest boat,’ says Jablonic, lifting one end of this monster splinter with both hands. ‘It weighs 220 pounds. In the old days, 285 pounds was light. Some boats weighed as much as 320.’ This particular shell is 58 feet long, almost the length of Milwaukee County’s new articulated superbuses.

Meet another modern miracle: the ‘cox box,’ a device about the size of a 3-pound coffee can. It is located just in front of the coxswain, the ninth member of an eight-oared shell, and the only light-weight. The cox steers the boat and sets the “stroke” - the number of oar strokes per minute.

In the past, the cox shouted directions through a non-electric megaphone. Mow he or she has a head mike wired through the cox box to three light loudspeakers scattered along the boat. Not only that, but the device under the sliding seat of the No. 8 oar - the stroke - picks up the stroke rate and records it continuously on the cox box, which also bears an electronic timer. Old-timers would flip.

Jablonic gets upset when UE athletic director Elroy Hirsch tells how George King, the Purdue athletic director, chides him with questions like, “What’s wrong with your rowing program, Elroy? I’ve got an intramural program and we’re kicking the (expletive) out of your $100,000-a-year program.” Jablonic said, “That kind of grabs me a little bit.

In a series of 1,000-meter warm ups with Syracuse (around May 27), UW’s varsity eight won two heats against Syracuse; in the JV-8 competition, UW lost the first heat, then won the next two; in the freshmen eights, UW won the first two heats; open 4 +, UW won twice; varsity 4 -, UW won twice; frosh 4 +, Syracuse won two and in the pairs, Syracuse won both. “I thought we were ready until we raced Wisconsin over the weekend,” Syracuse coach Bill Stanford said later in a pre-IRA interview.

High winds postponed the races, with Syracuse’s alternate course used for some of the races. IRA winners in the varsity eight - Princeton (5:49.9; their first IRA varsity eight win), Brown, Navy, Penn, Wisconsin and Cal. Duncan Kennedy rowed in the varsity eights as a sophomore. Kennedy, a prep schooler from Salisbury School in Connecticut, is the son of Moorhead Kennedy, , the economic officer at the U.S. Embassy in the Iranian capital of Tehran when the embassy was overrun by Moslem extremists in November 1979. Kennedy was one of the 52 Americans hostage taken hostage for 444 days. “I was the only one in the family who was lucky enough to actually get some of his letters,” said the younger Kennedy, a freshman at Salisbury at the time.

In the JV eights, the results were: Princeton “B,” Princeton “A,” Navy, Cal, Wisconsin and Cornell.

Wisconsin’s freshman win at IRA’s in time of 6:01.1. Neither the New York Times nor the Syracuse Herald-American had coverage of this race, which, with the other two eight events, had been postponed by heavy winds to early Sunday morning, June 2. Following UW (6:01.1) in the frosh eight event was Navy, Syracuse, Princeton, Penn and Columbia. 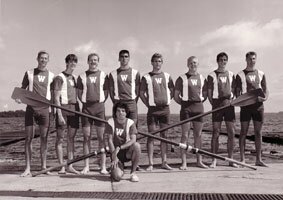 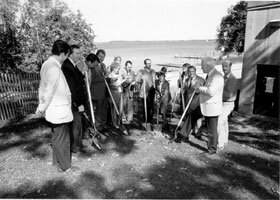