Wisconsin’s registration-line recruiting was described in a Milwaukee Journal article by Bob Schwoch,

“(Coach) Jablonic and his registration-line recruiting team are famous among UW students. If you’re tall and muscular, they’ll nab you right after you’ve been handed your enrollment form.

"Rowing at Wisconsin has gained the reputation as a tough sport. That reputation is gained because of the crew’s early morning practices, rain or shine, in front of the lakeshore dormitories. The students who live on the lake are awakened each morning by Jablonic’s voice, amplified by an electronic megaphone, shouting encouragement to the oarsmen. College students do not take kindly to being awakened unnecessarily at 6:00 a.m.

"‘One time, we heard that the students on the lakeshore were planning to pelt us with tomatoes,’ Jablonic remembered, with a smile. ‘But they couldn’t get out of bed early enough.’”

October 12: The first Head of the Rock was held. “Menacing steel-gray skies, temperatures under 50 and storm-swollen Rockford River waters caused race officials at the Head of the Rock to shorten the course from 3 to 1 ¾ miles and reverse the race to go upstream.”

Sponsored by the Rockford Park District and the YMCA Rockford Rowing Club (which, ironically, has no boats of its own), this was the first-ever “Head of the Rockford.” The regatta chairman was Bob Espeseth, Jr., a former UW rower living in Rockford. Illinois. The “Head” race is an elapsed-time race where crews start approximately 10 seconds apart. The course represents not only a challenge to oarsmen because of its distance (originally, 2.75 to 3 miles), but also to coxswains because the course follows the course of the river which includes both natural and man-made obstacles (such as bridges).

The UW “A” ( 9:25) boat won the Men’s Open 8 and received the Wallace C. Ogilby Memorial Trophy; UW eights also won the 2 nd and 3 rd positions. Wisconsin’s “A” (11:31) boating won the Amcore Bank Trophy for first place in the men’s Open 4, the event with the most entries - 14 in all; St. Paul Boat Club was second. The team trophy, sponsored by the University Club of Rockford, was won by Mendota Boat Club of Madison.

Over 40 volunteers helped organize and manage this regatta of 21 races with 250-300 competitors from 14 clubs.

At the Head of the Charles on October 19, the Badger varsity eight placed ninth. The order of finish was the Canadian Olympic Rowing Team ( 14:20), Pen AC, Cincinnati RC, Navy, Cal, Vesper BC, Victoria University of Canada, Penn ( 14:47) and Wisconsin ( 14:48). The UW four + was third behind Ridley College and Brown. The men’s frosh four + was 5 th in a race won by the Canadian Olympic Team, Navy and Princeton.

January 2-12, 1987, the Badger varsity trained at the Hills Athletic Club on Town Lake in Austin, Texas for the first time. The invitation to visit was “reasonably directly” encouraged as a result of UW’s national Championship victory at Cincinnati last summer.

The Austin American-Statesman captured part of the experience:

“A moist south wind lightly ripples the waters of Town Lake as daylight dwindles. Austin’s weekday traffic backs up just off shore, but an occasional honk or squeal of tires does little to mar this quiet scene.

"Gradually, all activity ceases along the lake as fog settles in for the night. But listen. The light sound of 32 oars scooping water swells. Voices calling out clipped but inaudible orders become more distinct.

"Four boats come into sight, manned by four crews of eight. A big, burly man keeps his balance on a trailing launch by grabbing hold of a guy wire. He is using an electronic megaphone to talk to his crews.

"The men, representing the University of Wisconsin, rowing’s collegiate champions, pull harder on the oars. And the boats glide a tad faster."

“Its essential that we work above and beyond the idea that the other guy is trying to beat us,” Jablonic says. “Thinking about what the other teams are doing can be negative, very abstract.” How grueling are these workouts? asks the sportswriter. “I don’t feel the pain at all,” Jablonic laughs.

Town Lake, Austin, Texas, provided the Wisconsin varsity men a special surprise - the best winter training format any Wisconsin crew has ever had.

Spring break training for the varsity was on the Rock River (March 14-22), while the frosh trained in Marietta, Ohio (March 13-23).

April 4 at the San Diego Crew Classic, the UW crew was met at the airport by “alumnus supreme, Andy Zafis, and his army of fellow UW alumni and their families.”The San Diego Union wrote, “When the Wisconsin men’s crew arrived at Crown Point Shores yesterday to launch the spanking-new boat it will use in this weekend’s Lowenbrau Crew Classic, there was a slight problem. No boat.

Word was the sleek, eight-oar shell would be shipped to San Diego in plenty of time for the Badgers’ first practice yesterday. It arrived at noon. And when the coaches and crew began assembling it, they encountered another snafu. No bolts.

So after a few phone calls, the group loaded into a van and drove to a nearby store for the center-section bolts that attach the boat together. By the time the shell was whole, the initially clear, wind-free day had turned cloudy and windy.”

April 25, the Midwest Rowing Championship was held on Lake Wingra’s 1,850-meter course. The race is important to Wisconsin because it is a qualifying race for the Cincinnati Regatta and next fall’s San Diego Crew Classic and Redwood Shores Invitational.

Madison Mayor Joseph Sensenbrenner was scheduled to present some of the awards.

The UW varsity eight finished 2 nd a length behind Brown (5:41.0 vs. UW’s 5:44.0), followed in order by Princeton ( 5:46), Harvard (5:46.8), Penn (5:47.2), Yale (5:49.5) and Boston University (5:50.4). Brown Coach Steve Gladstone’s father Harry called the varsity race over the loudspeaker. BU made the seven-boat final when it protested a lane violation by UW in the trial heat, which protest was upheld. Sportswriter Norman Hildes-Heim’s report on the Eastern Sprints varsity race in the New York Times, read, “Navy, seeded first on the basis of its Adams Cup victory, was knocked out of the final by Yale in the morning heats, adding to the anticipation for a close final. Brown, however, ran from Wisconsin, which finished second. Princeton finished third, with Harvard out of the medals in fourth, followed by Penn, Yale and Boston University.

For the Rowe Cup, Brown finished with 38 points, a point ahead of Wisconsin.”

“Brown decks Wisconsin once again,” wrote Rick Bonnell for the Syracuse Herald American. “The first 500 meters, all six championship entries stayed within meters of each other. At about the 1,000-meter mark, Brown opened a slight lead on Wisconsin, then spread the margin to a full boat-length over the next 200 meters. ‘This is probably one of the finest crews ever,’ said Jablonic of Brown after the championship race. ‘This is the finest crew I’ve had, and I’m just a little stunned anyone could be significantly faster.’ The Brown Bruins became the first varsity eight to win both the Eastern Sprints and the IRA’s in the same year since Cornell in 1963. The crowd was estimated at 6,000. Wisconsin was also runner-up to Brown in the Eastern Sprints.”

In another account of the varsity event: “A Day of Success for Brown,” wrote William Wallace for the IRA’s for the June 7, 1987New York Times (Sports V, p. 6). Wallace continued, “The Bruin varsity eight won in the swift time of 6:02.9 over the 2,000-meter course on Onondaga Lake. In second place, more than a boat length back, was Wisconsin (6:07.4), then, order, Penn, Navy, Princeton and California.

Next Saturday (Coach Steve Gladstone’s) Brown will row at Cincinnati invitational regatta, where the crew lost last year to Wisconsin. A Harvard crew won an IRA championship for the first time, with a first in the varsity four (without a coxswain) ahead of Princeton, Wisconsin, Georgetown, Orange Coast and Navy.

There were more than 500 oarsmen from 25 colleges competing in eight events, and in terms of overall performance those from Wisconsin compiled th most points, 344.5, to win the Ten Eyck trophy. The Badger eights were second in the freshmen, second varsity and varsity races and first among the varsity fours with coxswain (time 7:15.0).” The regatta attracted 6,000 spectators.

“At the 1,000-meter mark (Brown) just turned on the heater,” Jablonic said. “And we virtually collapsed on ourselves trying to keep up. We consumed ourselves. And we are one of the fastest varsity teams I’ve ever seen.”

Brown was the first team in 24 years to win the Eastern Sprints and the IRA varsity eight events. The last to accomplish this was Cornell in 1963.

Dartmouth was banned from the IRA’s by the New York State and Onondaga County health departments because of an outbreak of the measles on the Dartmouth campus.

In Cincinnati on Lake Harsha in Claremont County’s East Fork State Park competing for the Herschede Cup, Harvard, in record time (5:35.17), won its third championship in the six-year history of this event; Brown (5:35.81) was second followed by Wisconsin (5:41.85), UCLA and Temple. Brown lost by two seats, which Brown coach Steve Gladstone said was ‘close, but no fun.’

The Cash-strapped life of 4 itinerant rowers

All four knew as they packed the sweat socks, the soda cans and the cheese, sandwiches into their ancient Oldsmobile that this trip could easily drop them at the bread line as the finish line.

Such is the life of a University of Michigan oarsman.

The Wolverine Open Four found the finish line at the IRA, and they did so faster than four other crews Saturday (Penn, Syracuse, Rutgers and MIT). Michigan finished second to Brown in the Petite (consolation) Finals on Onondaga Lake.

That must seem rather insignificant, worthy of little more than a small-print mention. But consider the hardships UM’s four oarsmen endured to compete at the IRA:

- The “team bus” is a beaten-up station wagon inherited from a Michigan alumnus. It has more than 130,000 miles on the odometer and gets six miles to the gallon. Gas is at the kids’ expense, and the windshield wipers don’t work. Rain was constant through their overnight trip from Ann Arbor to Syracuse.

- The four rowed a used Schoenbrod shell bought from Amherst College on credit for $4,500. The Michigan crew club has paid $800 on the shell. Another $1,000 is overdue, and the crew figures the bank will repossess the boat any day now.

- While oarsmen from 21 other schools stayed in Syracuse University dorms during the week, the four Wolverines slept on the floor of a fraternity house.

-They showed up with no coach and no coxswain, recruiting what amounted to a ringer to cox the shell to its medal.

The Michigan four registered for the IRA on their own last week, not knowing who would cox their entry. Stu Schwill, an ex-MIT coxswain from Detroit, finally agreed to fly in for the event. Nobody seemed to mind that Schwill is not exactly a legitimate UM student.

Even if the four can figure out a way to pay off the club’s loan, the challenges aren’t over yet. The club’s insurance has lapsed and the Internal Revenue Service is calling. 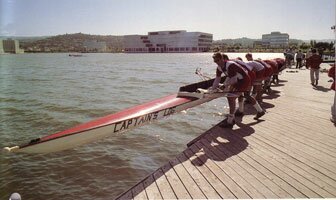 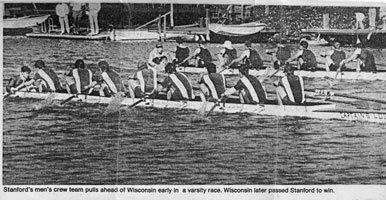 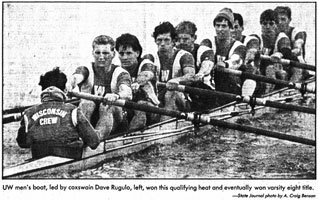