For Wisconsin crew coaches, this could be the end of the line

Randy Jablonic has mingled with University of Wisconsin freshmen in registration lines for 27 years. Jablonic, the UW men’s crew coach, was there again Thursday, chatting with the newest class of UW students. This yea, however, a note of concern could be detected both in Jablonic’s voice and in his eyes.

"‘It’s a frightening prospect because it’s going to take away this smorgasbord of (student) activity from which we can choose from. We’re looking at a thoroughbred stable and who are the race horses we’re going to have next spring? Where are we going to find them?’ "

October 11 - At the 2 nd annual Head of the Rock on the Rockford River, coach Jablonic took his ‘5 th’ varsity and finished 3 rd behind the Milwaukee RC and the University of Cincinnati. “The growth in the competition level will mean the Wisco men can start approaching the Head of the Rock more seriously should they choose in the future.”

“‘The guys on the crew team are here for school first. Rowing never becomes more important than school,’ said captain Pat McDonough. ‘The best rowers are usually the best students.’

According to Jablonic, athletics comes first. As for an athlete, ‘I look for a goal-oriented person, a self-starter, a capable athlete, who has his priorities set and gets his school work done.’ There are many rewards an athlete can obtain from participating in sports. Jablonic said, ‘the value of participating, self-discipline, travel, and meeting new people will all be valuable to a person in the future.’ ”

November 7 th was Class Race Day, where competition includes racing and attire. It was also Parents’ Day, where two new shells were presented, purchased by a $25,000 gift in memory of William K. Winkler, crew commodore in 1907. In those days, the crew commodore was responsible for raising funds to help defray the expenses of maintaining a crew program. For example, sending a boat or two to Poughkeepsie in 1907 cost around $2,000. The commodore would spend much of his fall and spring semesters, while still attending school and often rowing, soliciting donations from prior supporters and new donors.

Winter training for the second consecutive year was in Austin, Texas, beginning December 27. Varsity crew members bore the cost of the trip as financial support was unavailable from either the Athletic Department or the Wisconsin Rowing Association.

The Mid-Winter (dry land) Crew Classic in the Field House was February 13, with mostly 2,500-meter events on Concept II ergometers.

Spring training for the varsity at the Rock River in Edgerton, WI (March 12-20) and in Marietta, Ohio for the frosh (March 10-21).

March 26, the annual crew banquet was held at the UW Field House. Tickets are $14 and will include a slide presentation on rowing by free-lance photographer Brian Hill.

At the annual picnic, the “Pickle Boat Captain” award went to Tim Wike and Luke Astell.

May 28, UW wins Walsh cup. ‘The Middies varsity eight had a slight lead over the first 500 meters, but over the next 1000 meters of the 2000-meter course, Wisconsin creeped (that “Rude Wisconsin Creep”) ahead of Navy, building up a length and a quarter with a time of 5:52.5 with Middies clocked at 5:57.4.

The second varsity race was a dead heat with the two racing side-by-side throughout much of the race. Wisconsin nosed across the finish lone at 6:03.5 to a 6:03.8 for the Midshipmen.

“Northeastern’s eight-oared crew at long last won the Varsity Challenge Cup today at the IRA regatta on Onondaga Lake. Today, the crew, stroked by Steve Potter from Vienna, Va., made its own waves right through the 2,000 meter course, leading the five other finalists from first stroke to last. But there were some challenges from Brown and Wisconsin along the way. The varsity eight finish was Northeastern ( 6:14, under good but not perfect), Brown 6:15.2), Wisconsin (6:15.7), Syracuse (6:16.6), Princeton and Cornell. Brown crews won the second varsity (6:20.4) and freshman championship races plus the final for the (varsity) four-oared boats with coxswain. The Badgers were 2 nd in the second varsity eights (6:23.2) and 3 rd in the freshman eight event.

The Jim Ten Eyck Trophy that goes to the college compiling the most points in the eight events went to Wisconsin which had 331 points to 313 for Brown. The trophy goes to the program that scores the most points through the three days of racing, which means it goes to a team with great depth.

Syracuse Herald-American sportswriter Scott Conroe, in his June 5, 1988 column (pgs. D1 and D3) wrote little about the close varsity eight race, “The first four boats were within two seconds of each other. Northeastern won in 6:14, followed by Brown (6:15.2), Wisconsin (6:15.7), and Syracuse (6:16.6). Northeastern took the lead early and held on despite late surges by Brown and Wisconsin

'“Northeastern’s rigger, Charlie Smith, died in an auto accident the prior Wednesday in an auto accident near Albany, traveling to the Regatta. Captain Ed Novicelli said, ‘Smith was a real workin’ man from Maine. In Maine, you either fish lobster or make boats. I’m a better person for knowing him.'

About six minutes of absolute power are the coxswain’s reward in life. In that short span, the coxswain is responsible for steering the racing shell and calling out the rhythm of the oarsmen’s stroke.

On land, coxswains are teased by oarsmen and scoffed at by those who can’t understand what’s so tough about sitting in a boat and yelling.

But in those few moments on the water, coxswains enter another world. They rule as part psychologist, part jockey and part coach, and must alternatively cajole and spew profanities at exhausted oarsmen several inches taller and dozens of pounds heavier in an effort to get them to give just a little more than they think they can.

“I’ve had more coxswains lose races for me than any oarsmen ever, and I’ve had more coxswains win races for me than any oarsmen ever,” said Syracuse crew coach Bill Stanford. He continues, “There’s no particular type of personality that makes a good coxswain, but once in the boat, insecurity and indecisiveness can quickly end a coxswain’s career. If a coxswain’s a blowhard, that wears thin. If they’re insecure, the oarsmen sense that and take advantage of them by intimidating them.”

A coxswain also must steer the boat with a string attached to a rudder assembly below them. The boats are so long - eights are 60 feet and fours are 45 - that there’s a long response time between steering and the actual turning, and mistakes can’t be corrected quickly. Also, the coxswain’s line of sight is blocked by the oarsman in front of him. While steering is a technique that can be mastered with practice, experience and an innate ability to sense trouble before it happens separate the top coxswains from the rest.

As the stroke rate picks up - and the last 500 meters of the race is usually a sprint - the rower’s technique tends to falter. At the slightest hint of a rough ride, the coxswain has to identify the problem, which oarsmen is most likely causing it, and the solution.

With so many variables, it’s no surprise that when a race is lost by just a few seconds, the coxswain’s judgment is scrutinized first. And he’s the last one to point fingers. Although the coach expects the coxswain to be his link to the oarsmen in many matters concerning the team, coxswains quickly learn not to blame anyone for a bad race. 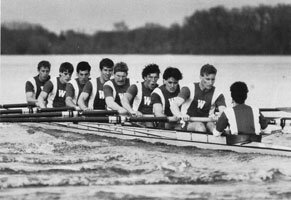 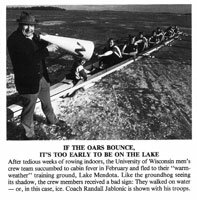 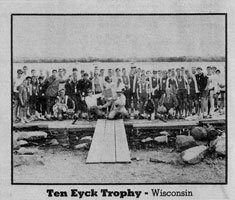 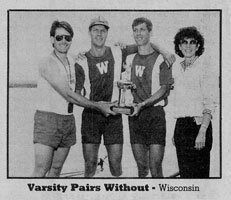