Although Wisconsin crew is one of the most successful sports at Madison, capturing 17 National Collegiate rowing titles in the last ten years, the UW-Athletic Department cuts in 1991 did not miss the sport. The university funding for men’s crew was capped at its 1991 figure of $180,000 (the women’s crew budget was temporarily capped at $150,000) and remained capped through until July 1, 2001, when the university was in the midst of a capital-raising campaign to enlarge the boathouse. Of the six sports slated for elimination by Title IX’s enforced gender balancing, men’s crew was the only one to survive. UW-baseball, men’s and women’s gymnastics and men’s and women’s fencing were terminated.

Men’s crew budget was capped at $180,000 in the spring of 1991. “The big thing from capping,” Coach Jablonic said, “has been the fact that our funds to complete a season, our funds to buy equipment and the overrun of the $330,000 that the athletic department provides us for salaries, services and travel, must come from alumni or raised funds.

In response to the budget capping, coaches and oarsmen alike have focused efforts on attempting to get the sport endowed by the rowing alumni association. An endowment consists of a large one-time donation placed in the bank. The crew teams would be able to survive off the interest the donation earned each year.

Head Coach Randy Jablonic is leading the efforts as the official fund raiser for both men’s and women’s crew. Jablonic has traveled near and far, approaching important alumni with the need for donations. This extra work was one of the reasons Jablonic withheld participation of the Badgers in the Cincinnati Regatta last year. ‘It was a question of time, money and fatigue,’ Jablonic said. ‘We worked hard all year to get fast but we were just too far off the pace to compete.’ After losing several seniors from the team to graduation, Jablonic viewed the season as a rebuilding year.

Greg Myhr, a member of the JV boat last season, was chosen captain for 1991-92. Myhr enjoyed the sense of harmony within the team. ‘There’s an overall team feeling in crew because to be successful everyone has to be in perfect unity,’ Myhr said.

The men’s crew alumni begin an annual program of private support which brings an estimated $50,000 per annum to the program every year from the early 1990’s to today, which allows the port to survive. While the men’s heavyweight (only) crew program by the year 2000 has roughly one-third the budget of the women’s $1 million open weight and lightweight crew budgets (including 20 scholarships), the impact of the women’s crew program as the ‘flywheel’ to balance the Title IX requirements of UW’s entire athletic program is likely to favorably influence the allocation of capital funds to the long-planned and now urgently needed expansion and modernization of the joint men’s and women’s crew house.

UW’s crew attended the Chicago Regatta on September 21 and 22. The course began at the Adams Street bridge (near the Sears Tower) and followed the architectural canyon of the city north for about 1,200 meters. At that point, the rowers followed the river’s ninety-degree bend eastward to the finish. There, the Centennial Fountain, which shot an arc of water 200 feet across the river, greeted each crew with a shower as they passed. Competitors for the Mayor’s Cup included Oxford, Cambridge, Navy and Wisconsin, while the Midwest Challenge Cup event included Northwestern, Purdue, Wichita State and Notre Dame.

The semi-finals were held on a cold and rainy Friday during which Cambridge finished two boat-lengths ahead of Oxford and Navy beat Wisco by a boat length of open water. On Saturday, the crowds came out in greater numbers to enjoy the sunshine and pageantry of the regatta finals. Northwestern won the Midwest Challenge Cup. Wisconsin had a great race against Oxford, but the video tape established Oxford as the winner by a small margin. Cambridge won the Mayor’s Cup finishing 1 ½ boat lengths ahead of Navy.

The annual crew banquet was scheduled for March 2, 1991.

The thirteenth annual San Diego Classic was scheduled. Interviewed before the race in Madison, Jablonic commented about the crew’s spring training: “We’ve discovered that no matter how hard we row, we’re not very quick on ice.”

UW’s varsity men placed eighth in the 13 team Henley On-the-Potomac regatta; Coach Jablonic had hoped for a little faster time at this point in the season, but UW’s extremely poor weather conditions for training was a major impediment to early victory in the racing season. In the petite final, UW was fourth ((5:41.04) behind winner UCLA (5:34.04); Harvard won the grand final.

May 6, the Cochrane Cup was held on a Lake Wingra’s course estimated at 1,850-meters. In the varsity eight race, the Badgers took the lead about 700 meters into the race. “We were down about five seats to Dartmouth and MIT at one point, but I noticed Dartmouth wasn’t bringing their rate down,” coxswain Mark Sniderman said. “They couldn’t sustain the rate, but they couldn’t keep the power up to make the boat go faster, so we just started walking on them. UW won at 6:02.0, with Dartmouth second at 6:07; Wisco’s third varsity (6:19.4) and MIT fourth ( 6:24).

The Pickle Boat Captain for 1991, to the spark plug and inspiration to the third fourth and fifth varsity boats, was awarded to George Cadwalader. 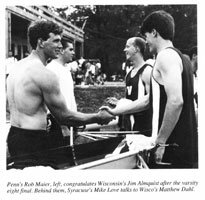