September 28, the tailgate party was held.

The Head of the Rock was October 12, with the varsity eights were first, second and third, while the open fours won both first and second. The frosh 8 + and 4 + both won firsts.

At the Head of the Charles October 20, UW’s eight came in 11 th, but were fourth among college crews. UW’s 1966 crew, attending their reunion at the regatta, gave a new shell, the Thomas W. Sy, to the men’s crew. The gift was in honor of Tom Sy who stroked the Badger’s first entry in the Head of the Charles’ Senior Eights event in 1966, which the Badgers won, and also the 1966 IRA varsity championship crew from Wisconsin. Tom died of cancer in 1978.

The Head of the Milwaukee, the week following the Charles, was an opportunity for UW open fours to win first and second and the frosh eight’s “B” boat to defeat the frosh “A” boat. The frosh eight won a first.

Midwinter training was in Austin, Texas from December 27 to January 12. Practice was on Walter E. Lake, 10 miles east of Austin. Accommodations were in the Sheraton Austin.

March 2 nd, the joint men’s and women’s crew banquet was held at the Fieldhouse.

“It’s a 20-percent larger blade,” said Jablonic. “The oar is lighter and stiffer. It looks clumsy and awkward, but it seems to work.” Jablonic’s crew practiced with these new oars during winter break in Austin, Texas. “They appeared efficient, “ Jablonic said, “I didn’t see the obvious difference. Not until we were beaten by Dartmouth. Of the 13-second difference, Jablonic said, “That’s nearly three to four boat lengths.”

The new shape of the oar resembles a meat cleaver and was designed by Dick and Pete Dressigacker of Morrisville, VT, whose firm, Concept II, is the largest manufacturer of sweep oars for competition rowing in the United States. The oars cost $200 apiece. A set of 10 is $2,000. The Wisconsin Rowing Association helped both the men’s and women’s teams purchase new oars within weeks.

May 30, UW, competing in three 1,000-meter races per event-category against Syracuse, won the freshman eight and frosh, V4 – and V4+ races against Syracuse in a pre-IRA warm-up. The varsity eight lost the first two, but won the third in their series.

George Cadwalader, for the second year in a row, was named the “Pickle Boat Captain” for 1992.

June 1, 1992, UW oarsman and long-time supporter Fred Emerson, age 81 of Lyme, CT died. A rower at Culver Academy, Emerson brought this skill to UW in the early 1930’s. He went on to support the UW crew on many occasions through difficult times in the 1970’s. In 1971, he donated most of the equipment and financial support to begin rowing at the Coast Guard Academy (about 20 miles up the road from Lyme, CT. He was credited with contributing to over 60 schools. Emerson also sponsored the Women’s National Championships in Lyme, CT in 1971.

Wisconsin made a quick switch to the hatchet oars by the Syracuse IRA regatta. Seven of eight records were broken at the IRA’s with the new oars.

The IRA’s of June 6, 1992 had three co-winners in the varsity eight race, Navy (5:52.1), Dartmouth and Penn, after photo-finish and a protest by Penn over an official’s boat wash. While Penn was not likely to have finished near the front, race officials, seeing some rowers’ having already started home to study for final exams, decided to award a three-way tie because of the extenuating circumstances that made it impossible to re-row. After the three-way tie for first, finishers in the varsity eights were: Princeton (5:55.4), Cornell (5:56.2) and Wisconsin (6:10.5).

Wisconsin, taking advantage of boats in seven of the nine championship events, finished with 308.15 points to win its first Ten Eyck in four years. The Badgers won the trophy consecutively between 1986 and 1988.” The result deprived Navy (307.1 points) of the Ten Eyck, which went to Wisconsin (with 308.15), its first in four years.

However, the Ten Eyck Trophy was returned to the ECAC (and then sent on to Navy coach Rick Clothier) and the Varsity Four without coxswain trophy, the first place medals and the betting shirts given to Wisconsin were sent to Georgetown on June 23, 1992, when UW Varsity 4 - rower Paul Savell (a crew letter-winner 1989-91) was found to have been ineligible. Savell had apparently rowed a head race or two as a freshman at Navy for one semester in 1987 before transferring to UW and sitting out a semester. His history at Navy apparently attracted the closer attention of the ECAC, following the judges’ three-way-tie decision and initial Ten Eyck award.

On August 15, the WRA’s first golf outing was scheduled at the Pleasant View Golf Course in Middleton.

Coach Randy Jablonic on the Aesthetics of Rowing

In rowing you lock up the blades and give it a mighty heave, accelerate the boat, to extract the blades as smoothly and cleanly as you can with a smooth follow-through and then poise yourself on the recovery to allow the boat to run, and glide, and reach out for all the distance it can run without shaking it or bumping it around rushing it. It’s an exercise for the senses as much as for the muscles. 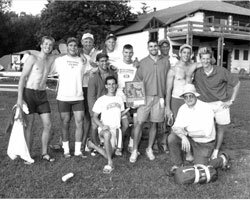